As lessons in keeping a decent update schedule go, this one’s pretty severe, because my last post was back in February and it was a hymn of praise to a slightly rusty blue Metro (which, I have just noticed, was actually posted on Valentine’s Day which is…touchingly sad).

Now, four months later, I’m going to have to do a tonal shift worthy of the One Show (you know the sort of thing – “…and if you or any family members have been affected by Nectrotizing Fasciitis, please call the BBC Support Line for help and guidance…[two second pause, smile to camera]…And now, Giles Brandreth has been to Salcombe where a grandmother has knitted the world’s biggest tea cosy!”)

Except my emotional jerk is in the other direction. The flags at the new Balloon_Fish HQ are at half mast at the moment because the Metro has been Killed in Action. That action being Aggravated Vehicle Theft. 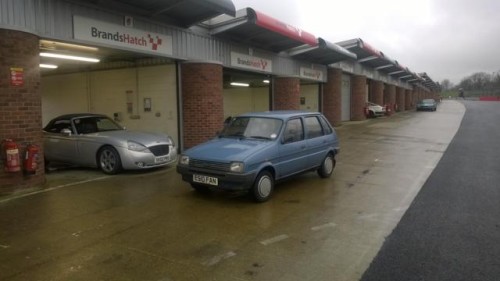 It had all been going so well, too. Soon after my exhaltations in February the Metro found itself in the unlikely location of Brands Hatch – not the car park, but the actual track. This was courtesy of a public track day organised by the Jaguar Enthusiasts’ Club and I was proud to find out that the Metro was by far the most rubbish and underpowered car there. Even better, it was a soaking wet day so many of the high-powered racing XJSs had to gingerly pick their way around the Indy circuit until it dried out, while the Metro could prance and four-wheel-drift its way around at full chat (50 mph). It also came through a day of motorsport abuse entirely unscathed, which is more than can be said for some of the more dedicated and German machinery there. But then, the Metro 1.3L does have quad-pot ventilated front brake discs as standard… 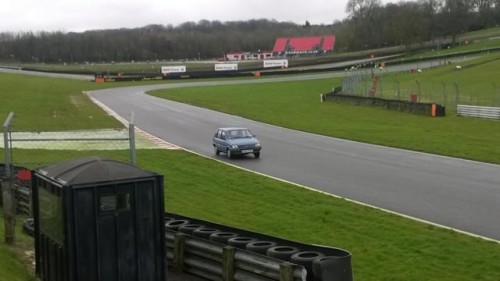 A few weeks later it was all change and the Metro was pressed into moving van duties, making numerous scoots back and forth across Peterborough and yet again impressing me with its load-carrying abilities (every time I thought “no, these book shelves are way too big to fit!” it proved me wrong). 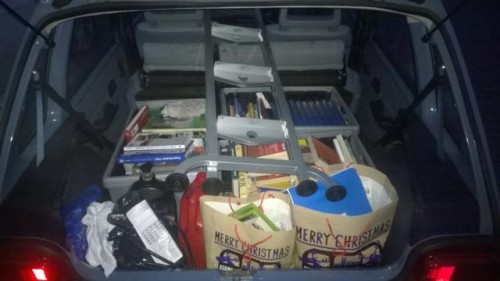 It had done so well that I treated it to a rather-overdue service, which was a breeze; a certain forgetting-to-put-the-sump-plug-back-in moment not withstanding. 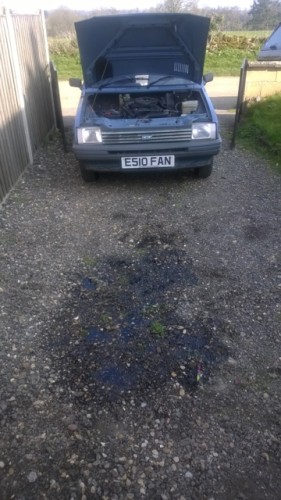 The Metro spent most of last summer off the road with a rusted-out-radiator so I was looking forward to actually driving it, you know, in daylight hours and in weather that didn’t continuously need the wipers and lights on.

Sadly it wasn’t to be, because one fine morning in June I came out of my new place to find this: 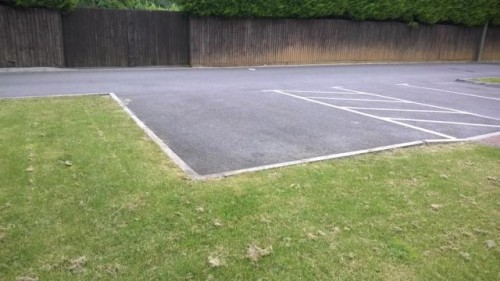 A scene which is decidely lacking a small and underappreciated British supermini from the mid-‘Eighties. Which was a problem because that spot (the one with the two drops of 15W/40 on it) is where the Metro had been the previous evening.

It’s a strange feeling when your car gets knicked – kinda surreal and I had a constant nagging sensation that there was some very good reason that the car wasn’t there, like I had woken up at 2am and, half-asleep, decided to move it. Or I had been lazy, driven it up to the corner shop and then walked back (but the Metro 1.3L isn’t such a forgettable driving experience…). I mean, unless Peterborough is being swept with a craze for ‘gloom-riding’ then why would you knick a Metro?

The obvious answer, of course, is that because you can get into one with a slightly sour look and a vaguely blunt instrument. For any ne’er-do-well skulking around the car park wanting to steal ‘a car’ it’s much easier to go for the Metro than of the dozen dark blue BMW 1-Series that all my neighbours seem to drive…actually, maybe this was some vigilante Neighbourhood Watch thing, finally fed up with me lowering the tone? 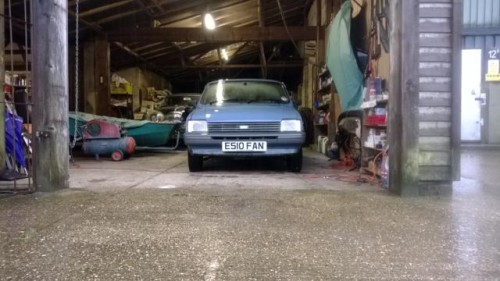 Anyway, the theft was logged with the police and the insurance company and the uneasy waiting game began. Then, after four days, I got a call to say the Metro had been found and was now sitting in a recovery yard near Stilton. As Brian Blessed would say “GOOD NEWS!!!”. Then I rang the yard and they told me that “it’s definitely not driveable and the front end’s all stove in.” This News Is Not So Good.

The police (who, I should say, have been excellent in keeping me informed with things as they develop) later told me that a patrol car came across the Metro on the road, the registration number flashed up as being stolen and the driver refused to stop. A ‘pursuit situation’ ensued until the thief, doubtless unable to handle the raw untameable power of a 1275cc A+ engine, crashed the car and was ‘apprehended’.

If the Metro had to go out, I’m glad it did it in style in the finest tradition of Police, Camera, Action! I’d rather that then have the lingering thought of it sitting submerged in some Norfolk drainage canal or as an unidentified burnt-out shell in Corby.

My visit to the yard to see the car for myself was with mixed feelings. Almost any damage to the car would write it off as far as the insurer was concerned, so if I wanted to resurrect the Metro it would be by my own endeavours. Given that just finding a radiator took five months I was dreading the prospect of finding an entire new front end. Then there was the logistics of the thing – how was I going to get the Metro from the yard to wherever it was going to be repaired, since the insurance company wouldn’t be paying for it? Where was that going to be? I have no driveway or shed, just a couple of car park spaces.

So I was sort of hoping that I would be greeted by a mangled cube of vaguely Metro-shaped parts, so I could walk away thinking “It’s a goner, sad loss and all that but there’s nothing I can do!”. Sadly that’s not the case. 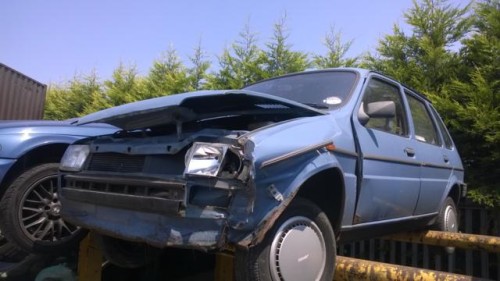 It’s sort of bad, sort of not. Even the precious radiator has survived! Yes, it’s a foot shorter at the front than it was but it’s nothing some new panels, lamps, bumper etc. wouldn’t sort out. The Metro had clearly been stuffed into a ditch, because on the driver’s side every panel is dented, scuffed and rippled and all the panel seams were full of grass. There are a few dents on the other side – the only unscathed part is the rear end. 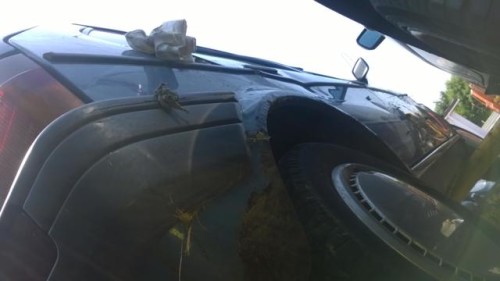 Looking underneath it doesn’t seem bad – the front part of the subframe has been pinched in, doubtless where the bumper took the impact, but the engine hasn’t been shifted, the steering is all straight and the suspension is all true. I reckon the car would move under its own power without trouble. 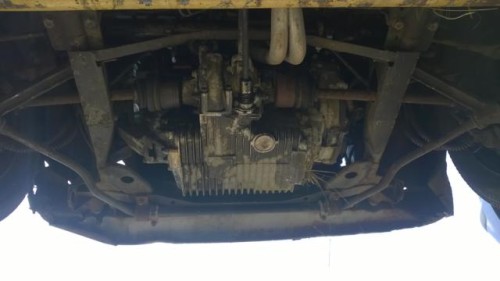 The interior has also been fairly badly borked. Whoever stole it seemes to have simply used a club hammer to bash off the steering lock and then hot wire it. So there goes one of the car’s finest features – it’s immaculate interior. Amusingly the miscreant didn’t think any of my CDs were worth stealing, so I’ve got them back, along with the Metro’s handbook and a pair of sunglasses that aren’t mine. Bonus! 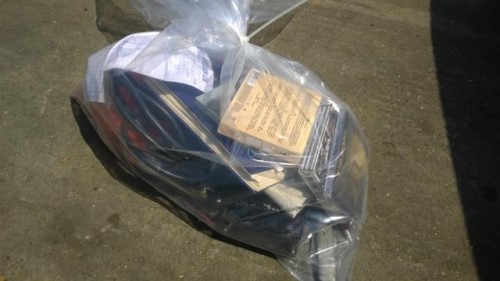 So the car is theoretically saveable. But it’s not saveable by me. I don’t have the space to do the work or, really, the time that would doubtless be needed to source all the new parts (and essentially every external panel would have to be replaced). I also suspect that once the work began you’d find more distorted parts than there seem on first glance and once you started measuring everything up and putting a set-square on bits I’d find that I had paid the insurance company for a unique and useless trapezoidal Metro. 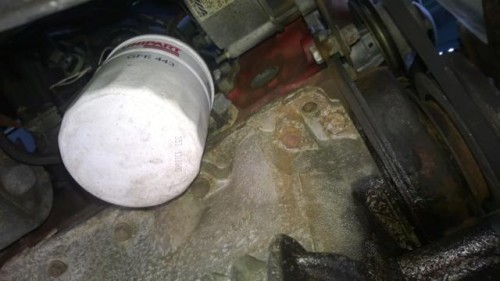 Boy, now it seems doing that oil and filter change was really worth it…

The lack of space also stops me from buying it back selling off the remaining good bits – that low-mileage A+ engine would go for a song to someone trying to turn a Mini City E into a Cooper replica (grumble, grumble).

But, really, the deciding factor is that I was going to get rid of the Metro anyway. As much as I enjoyed owning it I had too many cars and the Metro was lined up for sale. So I’d be putting all that effort into resurrecting a car I was going to sell. And, at the end of the day, it’s a car. As much as we can get carried away sometimes, it’s not alive and it doesn’t need ‘a second chance’. Part of me does want to get it fixed up on principle but I’m not sure I value that principle that highly. If my Land Rover had been stolen and written off in a ditch (that would have to be quite a ditch!) I would be willing to put illogical amounts of effort into getting it back on the road because I’ve had it long enough, and done enough things with it, that its significance to me goes beyond logic. The Metro, for all its charms, hadn’t got to that stage.

So it will be go to a vehicle recycling centre where, hopefully, its mechanical parts will go to keep other cars (hopefully Metros, probably Minis) going. So if you’re in the East Midlands and need any Metro bits (especially a radiator!), keep an eye out for a faded blue 1.3L. Under that rust-frilled skin is a mechanical heart of gold.

P.S. – I can’t not mention all the support I’ve had from friends, acquaintances and whatever social position ‘people-you-talk-to-a-lot-on-twitter-but-have-never-actually-met’ fall into. Even though I only told you all about the loss of the Metro for interest, people quickly spread the word around the internet, with posts appearing on Autoshite and Retro Rides asking people to keep an eye out.

Since the Metro was found I’ve had offers of shed space and engine cranes to fix or strip it, which is frankly amazingly kind for someone who, at best, only posts sporadically on those forums and certainly wouldn’t go as far as to say he’s a member of the ‘community’. Except of course, we’re all lovers of old cars, for which there is no real qualification other than that. And the past week has really proved it. Thank you all who got involved in my tale of Metro theft.