Well, belated Happy New Year to you all.

And even more belated apologies and explanations for my unannounced and prolonged absence from this site in the last months of 2013. What started as a three-week battle with BT over a problem with reinstating my internet connection after a Vauxhall Vectra crashed into a crucial telegraph pole outside my house (long story…) turned into a bit of down time, with the continual intention to ‘get back to blogging next Friday’. Then I decided that the run up to Christmas would be a good time to look for a new place to live (because there certainly isn’t enough to be getting on with in December) and so, well, here I am.

The relocation of Balloon_Fish HQ is still on-going, so there may be a few quiet patches  to come, but now I’m hoping that 2014 will be more like ‘business as usual’.

Before the Friday Night Blogs start afresh, I thought I’d just do a quick info-dump on what the current state of my fleet is and what my thoughts are for the future (this week, at least).

My last blog, back in October, proposed fixing then selling the 2CV to fund the purchase of either a stupid Citroen, a Volkswagen Polo (what was I thinking?!?) or an MGF.

Well, three months on and the state of the fleet is as follows: 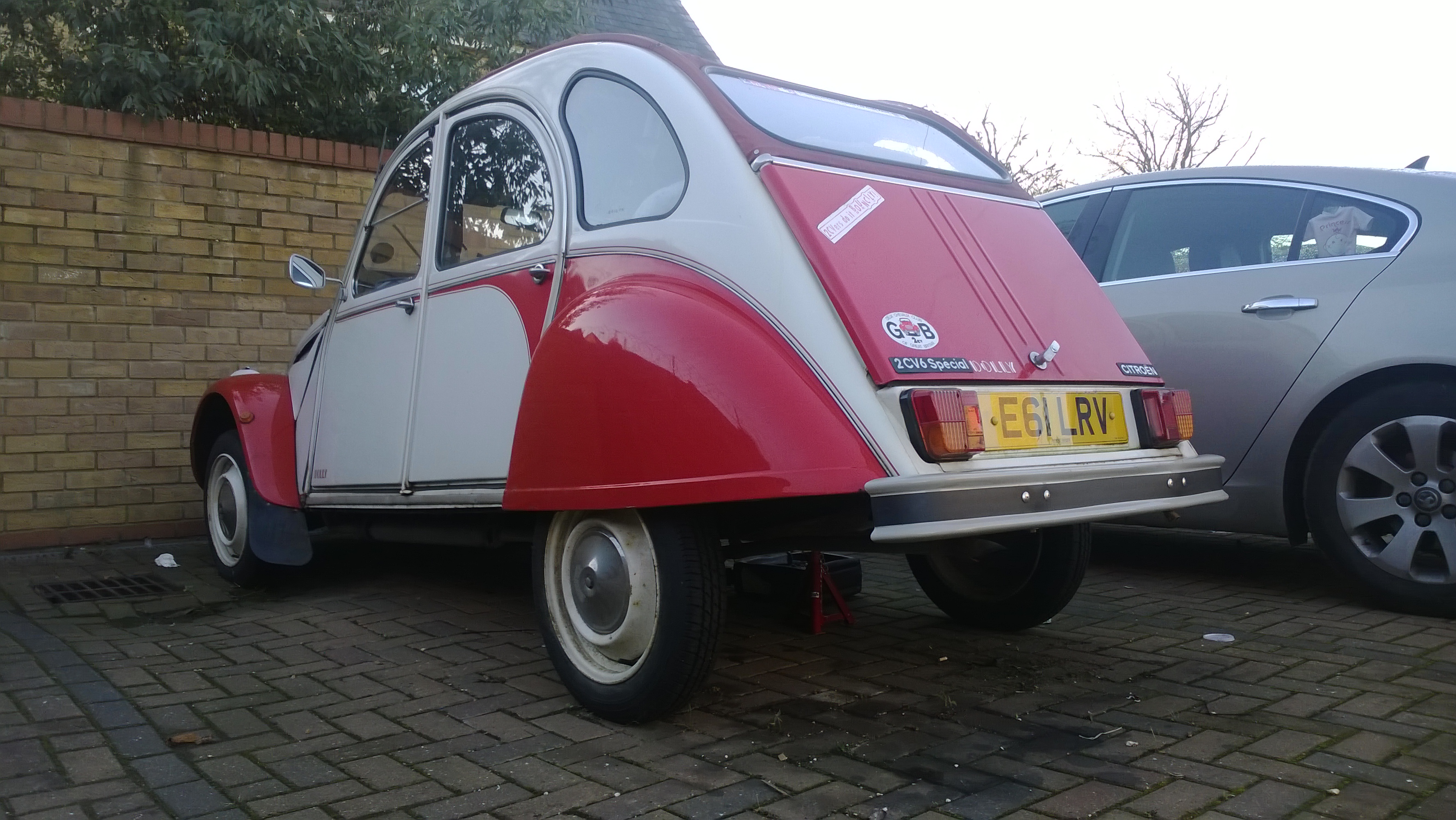 1) The 2CV still doesn’t work. It’s tyres have now gone flat and there is moss growing on it. I can get it to start and run sometimes (but not others), and when it does so it is absolutely fine, but I don’t trust it enough to take it onto the Queen’s Highway. What I’ve done is get myself into a mental corner by trying to fix too many things at once, breaking the cardinal rule of tinkering with old cars- ONLY DO ONE THING AT A TIME. Because I’ve fiddled with pretty much every part of the engine (all eight of them) I have no idea if the problem is still there or if the issue is now something I’ve done myself. The only way out of this is to redo everything, all at once, by the book. 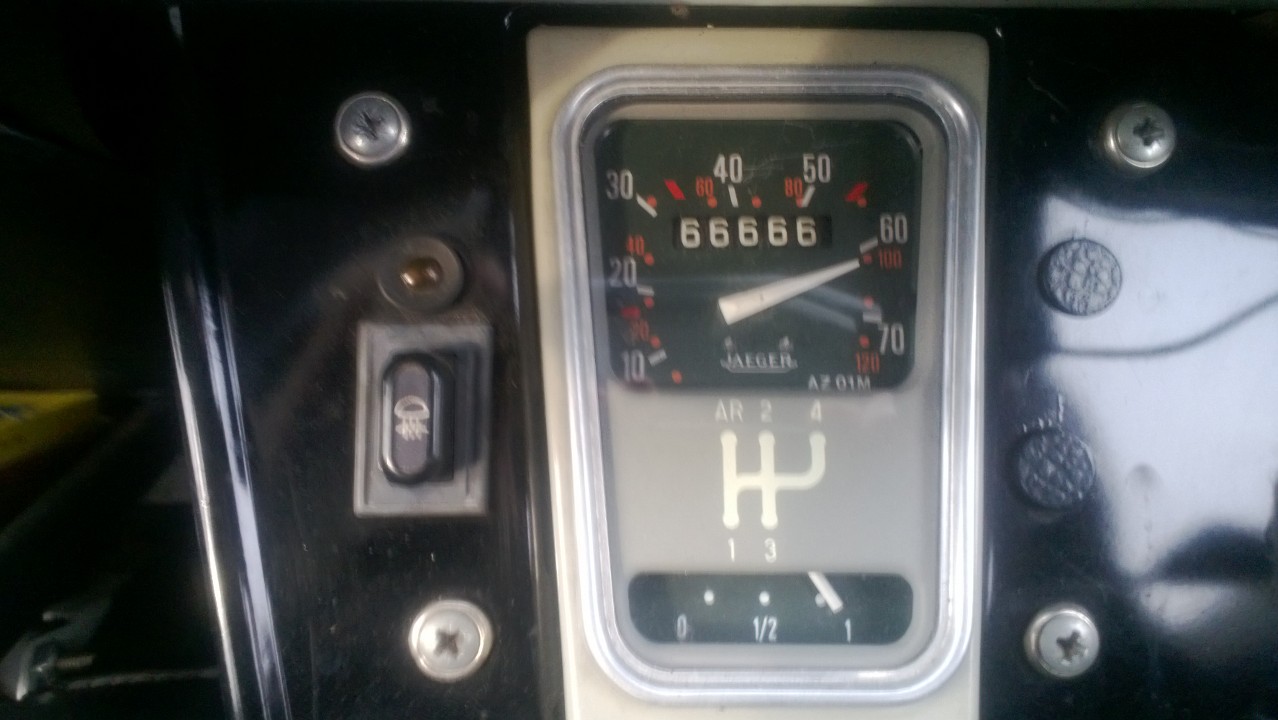 It’s cursed I tell you, cursed!

Once that’s done, The Plan is still to get it spruced up and sell it. More on that later.

2) The Metro is now back on the road and still continuing to impress with its ability to pile on the miles without complaint. I finally managed to track down what I think may be the last Mk2 Metro radiator in existence, through the time-honoured technique of ‘Looking on eBay Every Day Until One Came Up And Instantly Buying It.’ 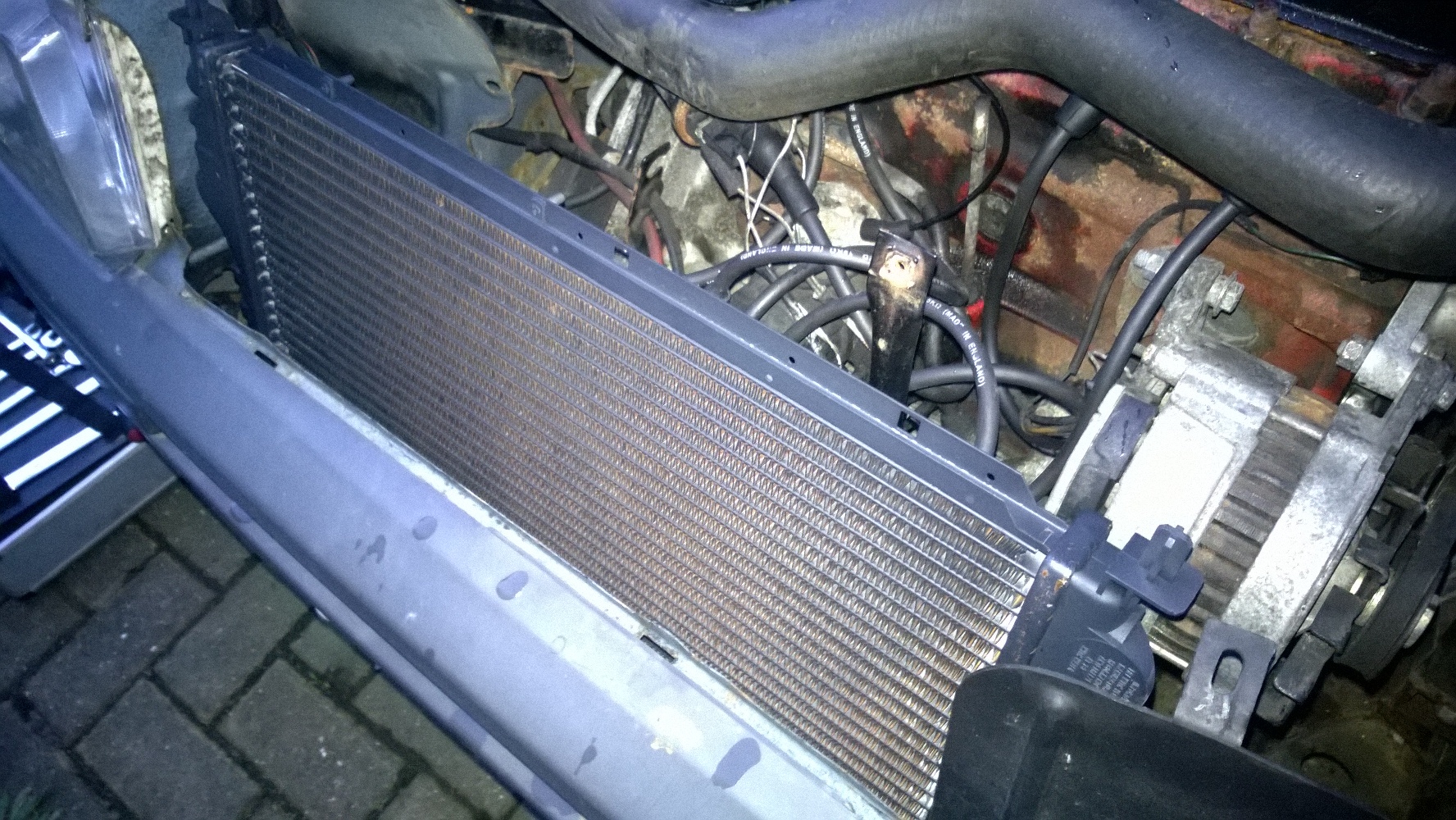 Remember where you were when you saw this- it is not for mortal men to gaze upon.

The cooling system has been flushed to remove…whatever was in there (it looked like Irn-Bru) and, as a bonus, the knackered steering rack has been replaced with a fresh one. 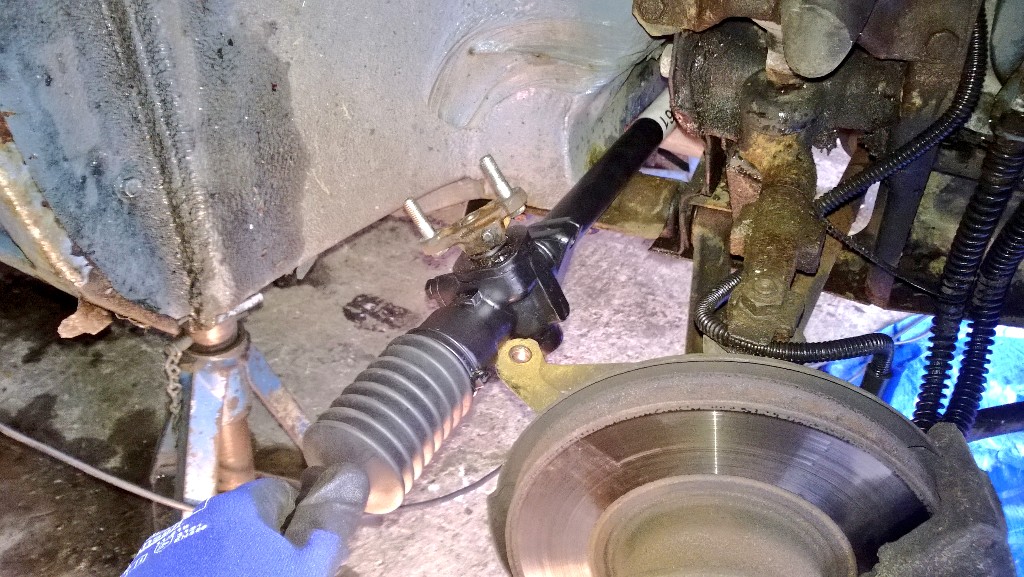 The intention is to keep the Metro and now that it’s mechanically sound I hope to spend the better summer months (assuming we get some) tending to the cosmetic parts (frilly sills, bubbly wheelarches) to stop it from dissolving away to nothing, as it deserves better than that. 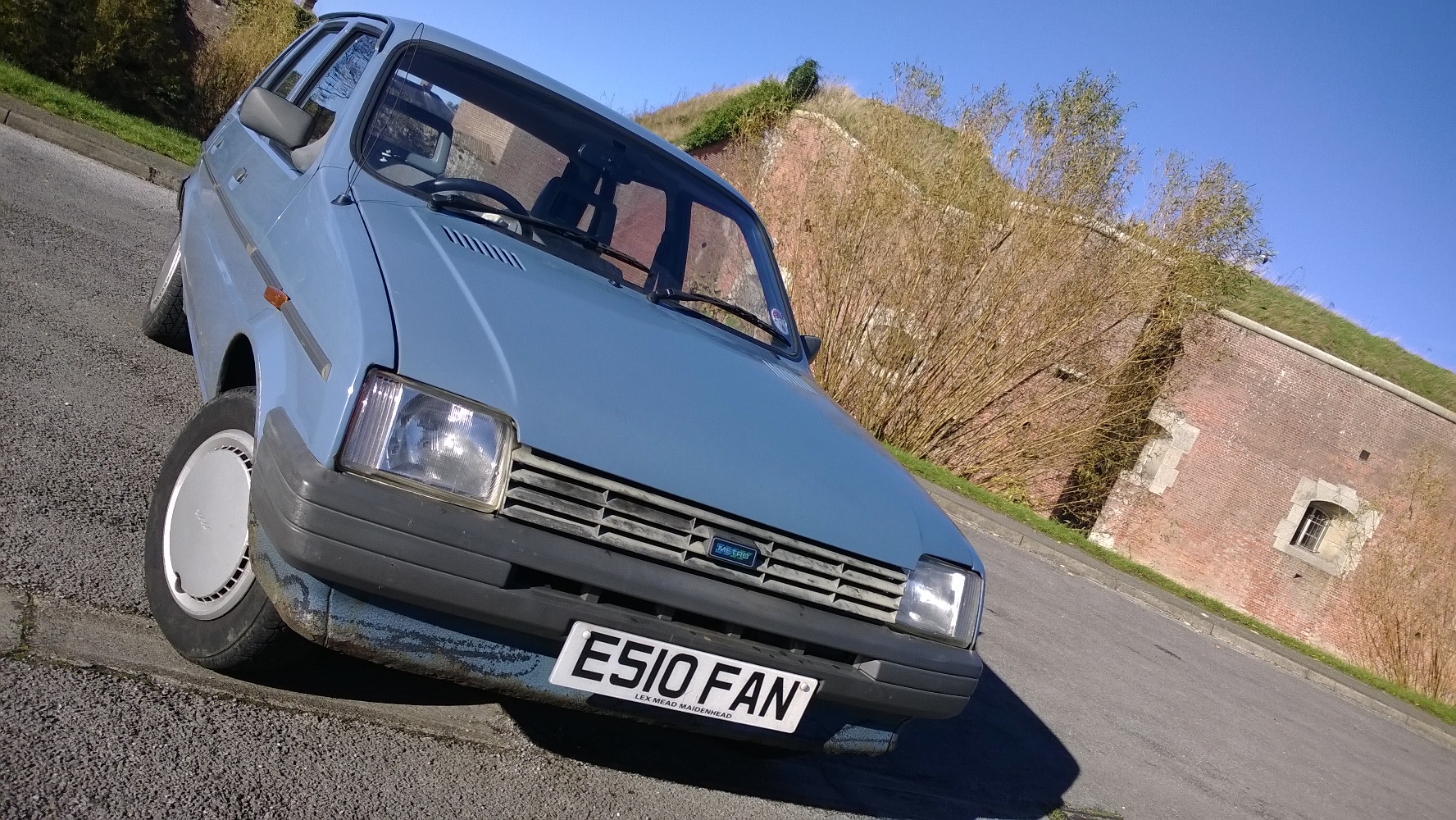 3) The long-suffering Land Rover remains in exile on the south coast, where it has been sitting quietly alone while torrential rain, gales and falling trees happen around it. The steering wheel has turned green and the interior smells as if all the wet dogs in the world have been having a farting contest in the load bay. None the less (and remarkably) it is fully functional, which is just as well because last time I checked it over this happened- 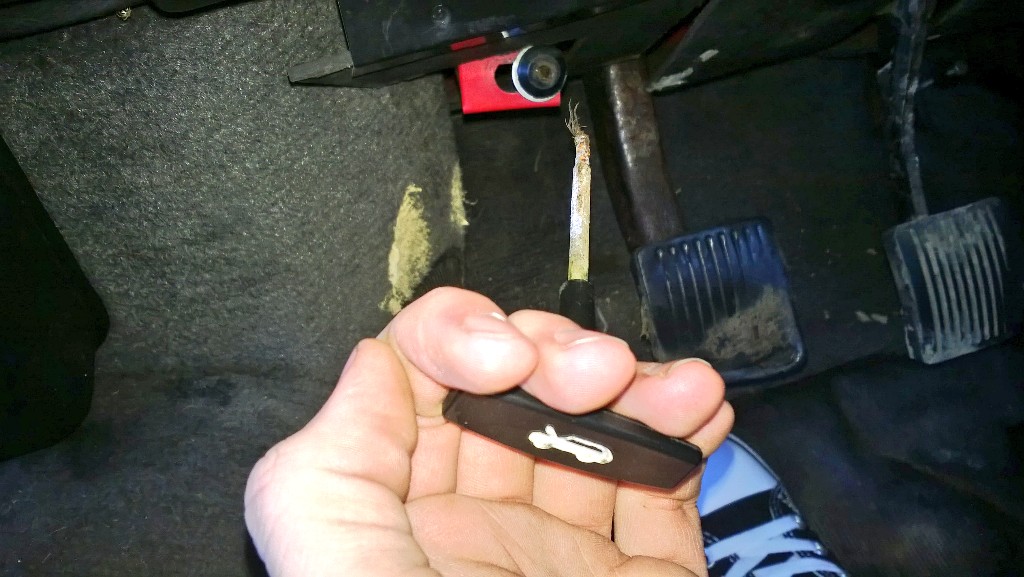 -so I can’t get to anything under the bonnet without lock-picking my way in with the screwdriver.

I am well aware of the contrast between ‘I will never sell the Land Rover because I like it too much’ and ‘I haven’t used the Land Rover since July and am leaving it by the seaside to rot away through no fault of its own.’ This is where Version 2 of The Plan comes in. 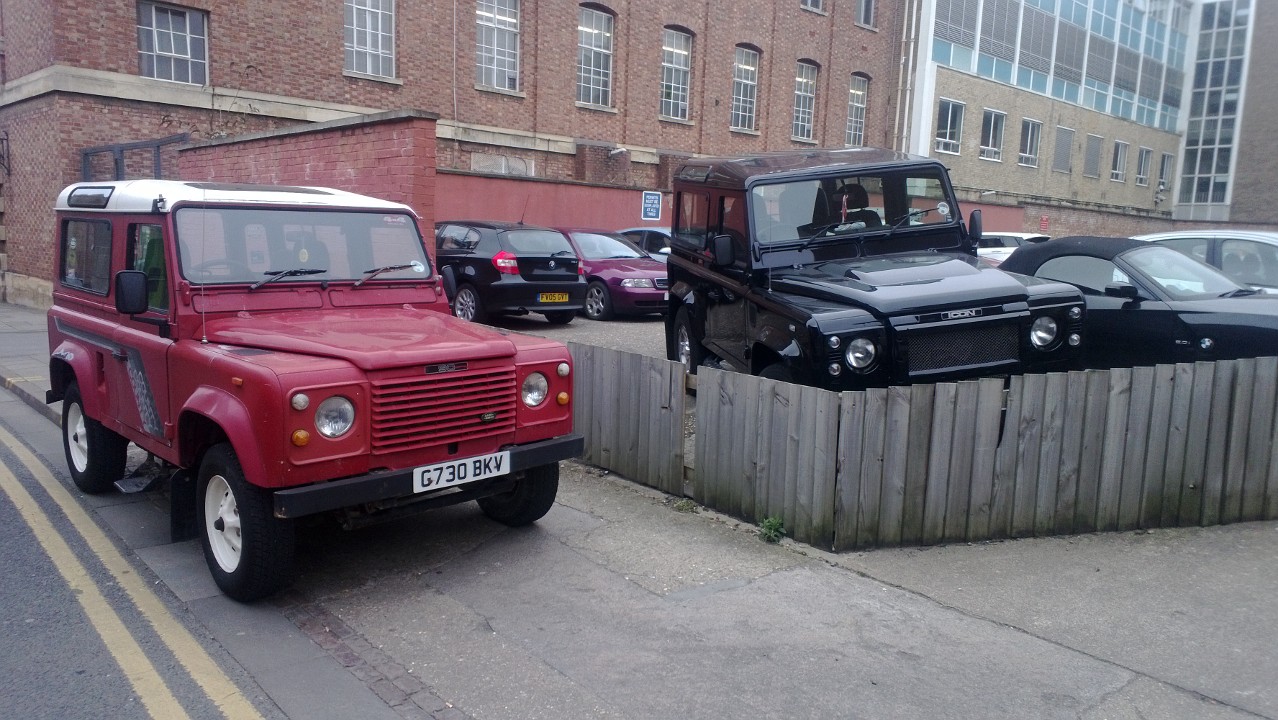 Mine’s the one on the left, just to be clear.

I’ve definitely been getting Land Rover withdrawal symptoms over winter. Fellow sufferers will recognise my discomfort when I say that this year the symptoms progressed from the usual ‘Oh I Wish I Could Drive My Land Rover Again’ to the much more serious, virulent strain of ‘Hmmm, I Fancy Driving A Different Land Rover…’

Yes, eight years after I sold my rusty beige Series III Land Rover because it was too unreliable I am, once again, wondering if a Series Land Rover would make sense as summer transport. Something about the idea of pottering about The Fens in a short-wheelbase Landy with no roof, door tops or windscreen on a summers day appeals, and I have to keep reminding myself that for every day like that you have to put in 10 days of pain and suffering.

On the Citroen front, I have been able to drive two ‘proper’ Citroens in quick succession- a 1958 ID and, of much more relevance to my budget, a grey diesel Xantia estate, last of the proper Citroens with hydraulic everything and a tendency to make odd noises as it goes about the place. All this did is confirm that, yes, I do want a hydropneumatic Citroen at some point. 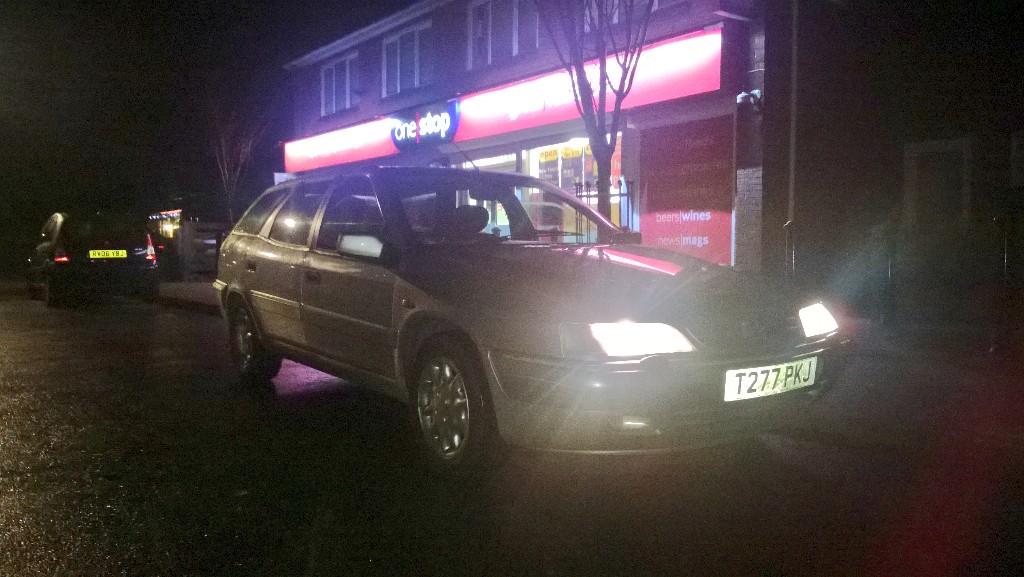 However, as things stand my new thoughts are ‘Instead of buying more cars that you will clearly be incapable of looking after properly, why not sell one car and use the money to make the ones you already have better??????’

Now, this has the horrible stench of logic and common sense to it but maybe, just maybe, it will work?

The Land Rover would be the main focus of the attention. It has quite a few structural parts (bulkhead top corners, A-frame chassis cross member) that, while they don’t need attending to RIGHT NOW, will definitely need doing so an MoT or two down the line. If selling the 2CV proved particularly lucrative I may even treat it to some expensive reconditioned drivetrain parts- the main gearbox is the obvious part that’s getting a bit sloppy, or I could treat to a zero-hours Turner engine rebuild. Who knows?