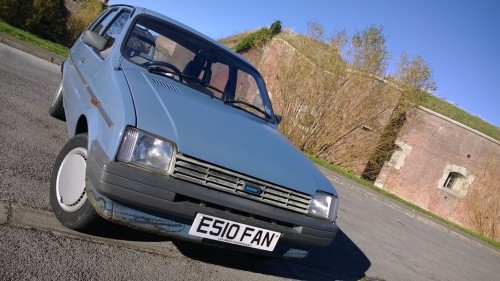 This wasn’t supposed to happen. It really wasn’t. But the Metro has really got under my skin. My name’s Jack and I’m a Metro fancier.

It was supposed to be something of a check-box exercise. I had plenty of second-hand exposure to British Leyland products but no actual ownership experience. This never stopped me sounding off about how cruelly misrepresented they were, of course, but there was the nagging sense that, really, I should take the plunge.

So the plan became: Buy cheap, unloved British Leyland car, run it for a bit so I can say ‘Actually, I have owned a British Leyland car and it was brilliant/rubbish [delete as experience dictates]’, sell it and get back to fantasising about proper cars like Citroën SMs and Datsun F11 Coupés.

I had no great affection for the Metro before I bought mine. They are, in fact, one of the few BL products that my family never really took to back when they were new. In fact the only experience in the Balloon_Fish clan before November 2012 was that my grandfather had a very early example in 1980 which proved to be so unreliable that it was the only BL product that my family has ever given up on. 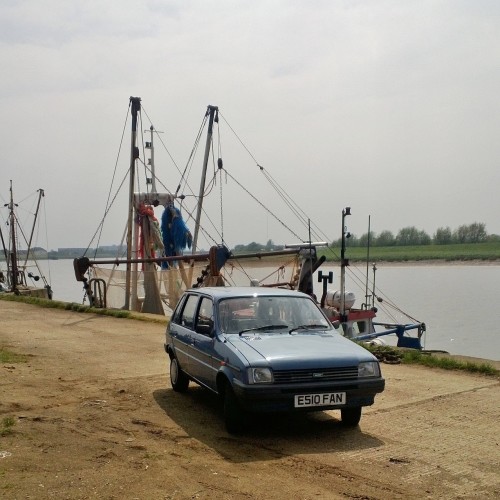 No, the Metro came into my life because I was browsing some classifieds ads for ‘a cheap British Leyland car’. The Austin section was near the top of the page and the Metro was the first one I saw that was within my budget and wasn’t something ridiculous like a 3-Litre or a rusted out Sheerline limousine. “Hmmm,” I thought to myself , “Metros are cheap to buy, cheap to run, practical and the parts should be easy to get hold of because underneath they’re just a Mini.” Oh, how naïve I was back in those far-off days!

The advert sounded promising- a 20,000 mile 1.3L 5-door for £500. Deep down I was slightly disappointed it wasn’t a beige 998cc City X or something else properly basic but, hey, I’m not buying this car for the long term.

One stressful trip to Reading later, where the 2CV got rear-ended at a traffic light by someone in Peugeot (a bit of sibling rivalry, perhaps?), and the Metro proved to fit the bill perfectly- only mild rust in non-important places, very straight and original, it drove well and the interior was virtually unmarked.

The deal was done and, as you can read on this blog, the collection experience was entirely unremarkable. My first impressions of the car where entirely what I expected- it was a small 1980s supermini with the engine out of a Mini that steered quite well. 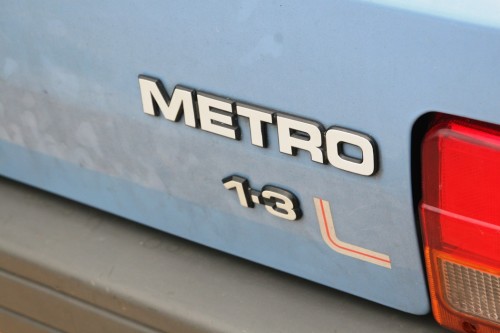 So, if the Metro was only supposed to be a flash in the pan type of affair, why do I still have it 15 months later and why I am I actually spending more money on it?

Then the radiator started falling apart, followed by a bush in the steering rack exploding (literally). With replacement Metro radiators being extremely difficult to find I wasn’t able to use the car for four months and things between us got a bit sour. I began thinking that maybe the time had come to part company- fix it up and sell it on. The Metro had been enjoyable but nothing spectacular, job done, move on.

But, as hack writers in glossy mags and unimaginative song lyricists will always point out, sometimes you have to lose something before you realise how good it was. Fixing the radiator removed the lingering worry in the back of my head that the car was going to expire in a cloud of steam- something that really put a damper on a long trek down to the West Country last summer. Usually such a trip would be a good time to bond with a car (any car) and the little Metro performed perfectly- but with one eye on the temperature gauge and a continual wariness about using full throttle I couldn’t really enjoy the experience. 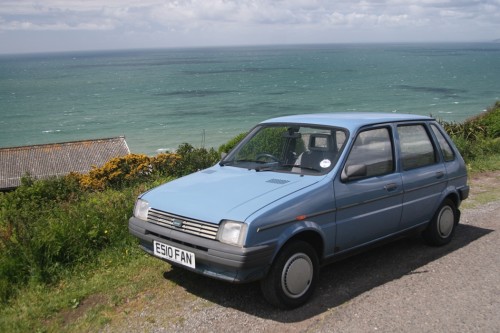 Replacing the steering also played a big part in my change of heart. Not only did it make the already-enjoyable handling even better but it removed one of the few remaining knocks and bangs from the undercarriage, and it’s these little things that can tip the balance between tolerating a car and growing genuinely fond of it. The job itself also showed the Metro to be a well-executed and thoughtfully-designed car. The same job on a Mini would have had me cursing and wondering how drunk the BL engineering team were on the particular Friday that they decided to put that bracket in that particular place, requiring you to undo that particular bolt and contorting yourself into positions usually not seen outside of a hellish Hieronymus Bosch painting. The Metro was a joy to work on, and having had previous cars where any latent goodwill was removed by the pains (physical and mental) required to work on them, this is a good thing. 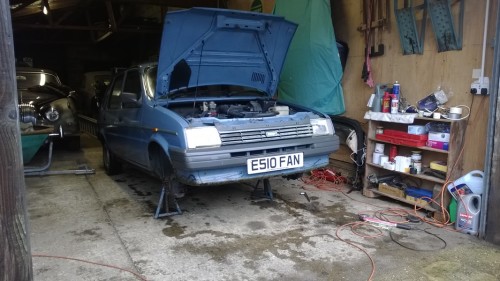 This means that the past three months has been the first period in my ownership where the Metro is actually properly working as its makers intended. I always appreciated why they sold so well back in the ‘Eighties (space, economy, good value for money, yadda yadda) but now I understand why they have their dedicated enthusiasts and why so many people who grew up with Metros or had them as first cars look back on them so fondly.

To put it bluntly, the Metro has nearly all of the character of the Mini but with very few of the downsides. It may not have the Mini’s cheeky looks, which were such a big part of that car’s appeal, but as a driving and ownership experience it really works. I love Minis but I appreciate that I can fit my 6’ 2” self behind the wheel of the Metro with room to spare and that I don’t have to bend over with my chin touching the steering wheel to peer out of the letter-box slot of clear windscreen demisted by the world’s most asthmatic heater system. In fact you can fit five people and luggage in the Metro and still be cosy rather than cramped. With its seats folded down my Metro has swallowed bikes, keyboards, packing crates of random stuff, two alloy wheels from an Audi, flatpack furniture and even a pair of six-foot living room floor lamps. I doubted the Metro’s packaging abilities when it came to shifting those lamps but it didn’t let me down.

So, this is all tedious practical stuff that the likes of What Car? drone on about. I could add that it always returns a touch over 40 miles per gallon and yet isn’t fazed by motorways. Despite being an early model with the ‘wrong’ suspension it rides much better than many modern equivalents. Besides the radiator and the steering rack it has only needed a gallon of oil, a set of spark plugs and an expansion bottle cap (that last one because I forgot to put it back on before driving off!) in over a year’s motoring. 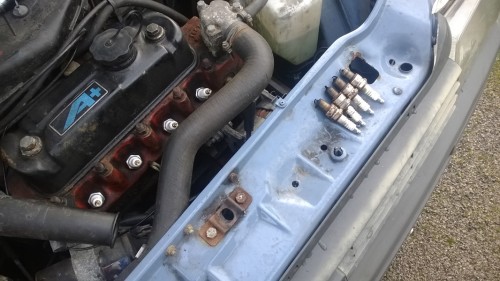 But there’s more than that, and now we get to the real reason why so many people seem to have a lingering love of the Metro. It’s just such a fun car to live with. If I had to sum up the Metro’s character in one word I’d say it was ‘feisty’, even this plain-Jane 1.3L model.

The A+ engine and its gearbox-in-sump may have been prehistoric even by the standards of 1987 but it’s an eager, willing engine that is happy to worked hard on occasion yet is tractable when you’re being more sensible. Like all A-Series motors it has an almost hair-trigger throttle response and you get that defining crescendo of gear whine in first gear. The pedals are perfectly laid out for a bit of pointless but enjoyable double-declutching or even heel-n-toeing. That gearbox may only be a four-speed but it’s a joy to use, with a slick shift. 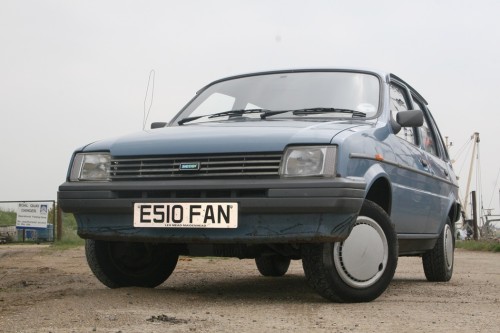 Otherwise the Metro is a featherweight car with famously quick (almost twitchy) steering, a wheel at each corner, fully independent variable-rate suspension and a low centre of gravity. This means you can punt it around the centre of town with the pistons singing their song of 1940s engineering, feeling the front wheels tugging under the influence of torque steer and then slamming on the four-pot ventilated front disc brakes before snatching a sneaky block-shift into second- all at less than 30 miles per hour. You can drive this car sensibly and it’s a nimble, easy-to-park and economical hatchback, or you can thrash the nuts of it and hoon it around the Peterborough ring road (or The Osterschleife as I call it), grinning like a mad Cheshire cat…while being left behind by a Transit van just chugging along on its way home from a plumbing job.

If you don’t look at the speedometer while driving you can convince yourself that the Metro is the fastest car in the world. It’s not a car that needs to be coaxed into doing anything. This isn’t a flabby, boring Golf or Peugeot that needs to have a dedicated hot-hatch version to be fun, although I am now genuinely intrigued as to what a properly quick Metro like an MG Turbo or one of the later Rover GTi versions would be like.

I wonder how much of this new-found affection is because the Metro is the first ‘normal’ car I’ve owned. Having owned two old Land Rovers and a Citroën 2CV maybe I’m just being wowed by some time spent with a car that doesn’t have all the performance and refinement of a ride-on lawnmower. 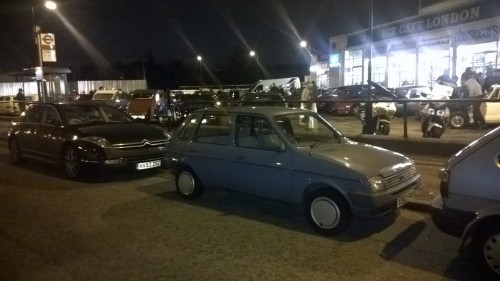 If that’s the case, I don’t really care. The reason why so many people like the Metro is because, for their 17-year old selves back in the late 80s and early 90s, even Grandma’s old hand-me-down 1.0 HLE with the extra tall economy 4th gear and flaking paint represented a huge improvement over the bus or bike. I happen to think that the Metro is a genuinely good little car that deserves far more recognition than its current status as a near-extinct granny-wagon provides. But if I’m wrong and I’m just experiencing the high of owning an actual car for the first time (10 years after I began driving) then that’s still something to revel in and a faded blue Metro with only one rear mudflap and a dodgy interior light is something to hang on to for as long as possible. 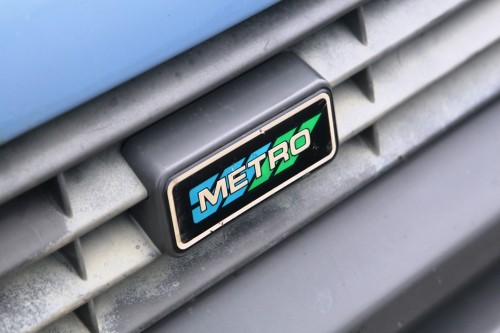