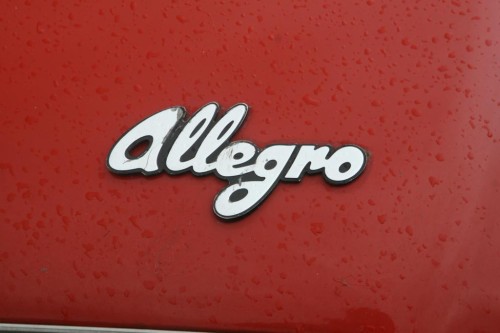 Forty years ago today the Austin Allegro was unveiled to the world. A replacement for the internationally successful, innovative and very well-regarded ADO16 range from BMC, the Allegro was to be British Leyland’s wonder-product for the ‘Seventies. The world held its breath, saw that it looked like a Bulldog that had over-eaten and was now suffering extreme digestive discomfort, went ‘Meh!’ and bought Ford Escorts.

I have summarised the Allegro’s good points already, and remarkably I’m not the only one. In fact there is a whole club dedicated to all things Allegro- the Austin Allegro Club International. Last weekend the AACI held a 40th birthday bash for the Allegro at the Heritage Motor Centre (a sort of Westminster Abbey for the British classic car movement, except that it’s in the Midlands and looks like the governmental building of a Balkan dictatorship). It seems thoroughly appropriate that the celebrations took place on the weekend before the one closest to the actual anniversary- ‘close, but not quite’ is the Allegro way of doing things, after all.

Obviously I wasn’t going to miss out on a chance to see over 40 Allegros in one place, but unfortunately I haven’t yet reached the pinnacle of the autoshite existence which is Allegro ownership itself. The Metro would have to stand-in, although I did wonder if turning up in a car that was a legitimate sales success would be seen as rubbing salt in the Allegro’s wounds.

In preparation for the 100-mile round trip I had hoped to fix the Metro’s blowing exhaust downpipe joint. This is a saga that will be covered in full at some later point, but the essence of it is that one of the clamps for the manifold/downpipe joint (for some reason the Metro has a sports-spec 4-to-2-to-1 layout, so the manifold has two outlets) was leaking. Removing the clamp, cleaning up the joint, applying some sealing paste and putting it back together proved a right pain because Austin seem to have designed the engine bay and its contents specifically to make this job as difficult as possible, with no room to get a decent wrench or ratchet drive on the clamp bolts. The inevitable result was that, after two days of leak-free driving, there was a sudden ‘rattle-rattle-KLANG-PPPPPPPPPPPPPP…’ noise as one half of the clamp parted company with the other and fell onto the road. Since a low-tune A+ engine in a Metro doesn’t exactly make a nice noise when running unsilenced I really wanted to get a new clamp before the trip to Gaydon.

This turned out to be much more complicated than it seemed, because while every motor factors and parts supplier in Peterborough had computer systems that insisted that 1.3 Minis and Metros use the same clamp, I now have a pile of not-quite-the-right-size clamps that beg to differ (if anyone’s in need of a manifold/downpipe clamp for a 1275cc A+ Mini, let me know!) 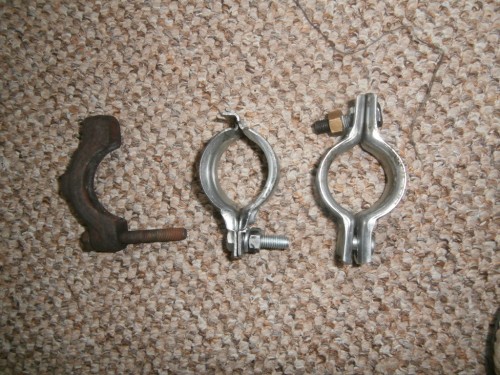 From left to right- broken, slightly wrong and completely wrong.

The end result was that I had to make the trip with the constant flatulent drone of a leaking exhaust just the other side of the Metro’s wafer-thin bulkhead. To make things even better, while I had set out from Peterborough in blazing sunshine the weather grew more overcast the further west I went, and practically the moment I parked up at Gaydon it began to rain, which it continued to do until I left. This seems to be a running theme of the 2013 show season with me. 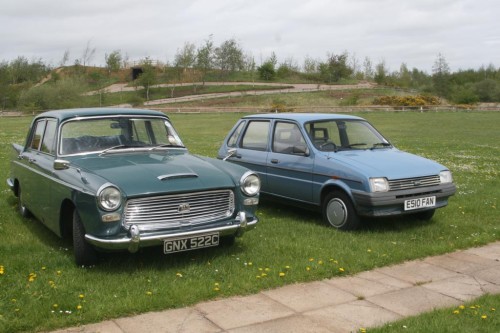 Anyway- Allegros.  A gathering of the AACI isn’t a subtle thing. Allegros were never really known for the their restrained colour schemes and the car park of the HMC managed to look gaudy even under a slate-grey sky. Harvest Gold (beige), Champagne (beige), Arran (beige), Russet (brown), Bracken (metallic brown), Citron (lime green), Applejack (lime green), Blaze (orange), Tahiti Blue, Tara Green. They were all there and they made for a dazzling array of naffness.

With there only being around 200 Allegros left registered in the UK, the 40-plus cars at Gaydon must represent a sizeable proportion of the total of roadworthy examples, and it was good to see that a full mix of models and variants was there. Given that the event was marking the car’s launch it was especially encouraging to see so many Series 1 cars- in fact there seemed to be at least one example of every model. Certainly all the major trim and engine levels were there, from a delightfully basic 2-door 1100 ‘Super’, complete with the Quartic (never call it square, especially at AACI events!) steering wheel, to the 1750 ‘Sports Special’ in Lagoon Blue which I see at every show and never get bored of.

There were Series 2s and Vanden Plas 1500s in abundance, saloons, estates and more Series 3 Allegros that I imagined could ever be in one place. Sadly, to me, this only proved that each facelift just made the cars looks shift further away from ‘quirky’ to ‘ugly’. None the less the highlight for an Allegro-fancier had to be the presence of not one, but two, Series 3 Allegro 1750 Equipes, the infamous ‘hot hatch’ variant which wasn’t hot, a hatch, or particularly good, but it was silver with orange and red stripes and turbine-styled alloy wheels.

The AACI were hosting a guest of honour on Sunday. No less a personage than Harris Mann himself, BL’s chief stylist for most of the ‘Seventies and the man with the Allegro, the Princess and the TR7 to his name. Having missed out on the chance to meet Alex Moulton, I wasn’t going to pass up a chance to at least shake the hand of one of the remaining Great Names from BL history. I can, of course, report that Mr Mann is a lovely chap- as if that wasn’t proved by his willingness to hang out in the rain with a load of enthusiasts for a car he designed (only to have cocked up by production engineers) 40 years ago. A lot of the AACI members were plying Harris for autographs in their Owners’ Handbooks or other literature. I did briefly wonder about getting a signature in the Metro’s handbook, until I remembered that that car was only partly his work and his original design suffered even more at the hands of BL management than the Allegro, and thought better of it. 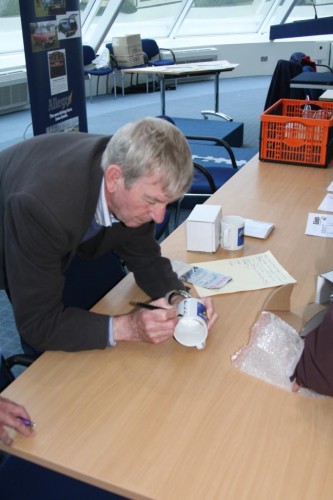 “Nice to meet you, Harris…big fan of your work…love the wedges”

I was able to sit in on the Club’s prize-giving and speech session- fortunately indoors. Harris gave a speech expressing quite natural, but highly appreciative, bewilderment at how a car that wasn’t that well received back in 1973 still attracted such a small but dedicated following. I say ‘small’, but while AACI will never match the more prominent marque clubs it isn’t the stereotypical ‘two blokes in a shed’ outfit either. In fact (and again, this could only really happen with the Allegro) the club began in 1990 when a newspaper ran a parody feature on a fictitious Allegro Owners’ Club, which prompted some owners to get together and create the real thing.

I’ve been on the receiving end of Morris Marina owners’ displeasure, having dared to say that their car may not be absolutely perfect in every way in print.  I’m glad to report that the common factor amongst the AACI members seems to be a sense of humour. While, rightly, willing to mount a defence of their chosen car against the usual uninformed or lazy criticism, they are equally perfectly aware that the Allegro is not without flaws or oddities, and there was lots of good-natured self deprecation going on, but coupled to very genuine fondness and enthusiasm. There’s no sign of an ‘I like my Allegro IRONICALLY’ tendency, which would be awful. 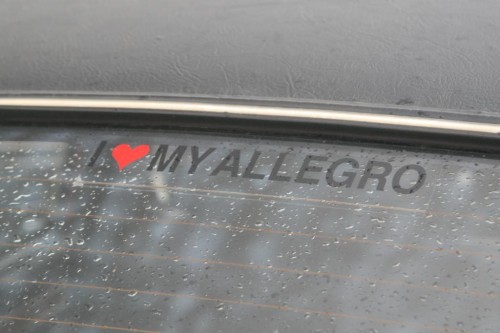 Speeches and prize-giving (including a much-coveted signed print of Harris Mann’s original styling sketch of the car) over, the final task for the Allegros’ designer was to cut a 40th birthday cake (Quartic-shaped, of course), before it was time to endure another 90 minutes of exhaust rasp for a wet and dull trip home. 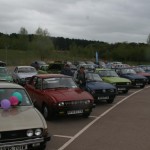 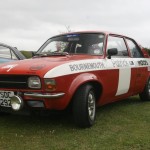 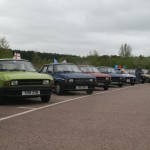 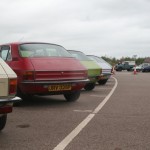 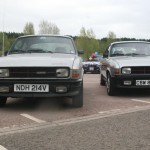 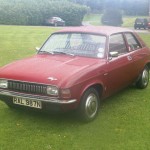 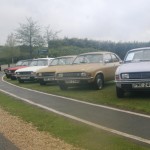 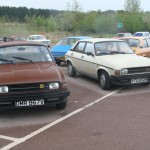 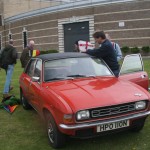 Several cars had just returned from a road trip to Seneffe, where the Allegro was built for the European market, hence the flags. 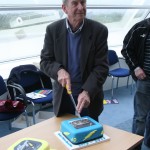 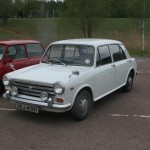 Just to rub it in, there was a single Austin 1300 lurking in the background. If a car could look smug… 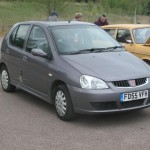 But there was also a grey CityRover for the Allegro owners to take pity on.