If any one phrase can sum up British Leyland’s products it’s “They’re OK apart from…”. BL weren’t in the habit of making truely bad cars, what they specialised in were fundamentally good (or even excellent) cars that were let down by one jaw-droppingly incompetent design or management decision. For example, the Rover SD1 – a 125-mph executive muscle car that looked like a Ferrari Daytona which slowly shook itself apart on the motorway. Or the Austin Maxi, which set the template for the modern family car and was technically miles ahead of any competitor but which was launched with a gearbox which was not merely bad but literally unuseable.

However no single product encapsulates BL’s ability to shoot itself in the foot like the Triumph Stag. A car that was praised by all who reviewed it and which cost around half as much as its only real competitor. A car which sealed Triumph’s reputation as one of the world’s superlative sports car builders. A car which managed to torpedo its biggest market and which undershot its sales projections by a factor of eight.

The Stag did not earn the nickname ‘Snag’ for nothing. Aside from the iffy fit/finish and electrical gremlins that were standard-fit on any British car of the 1970s the Stag’s unique, advanced and very expensive 3-litre V8 engine was riddled with faults. Chief amongst these were cronic overheating issues caused by a glorious mix of design flaws, quality issues and poor servicing regimes. Sales, which were initially healthy, stalled and then plummeted. As usual a raft of detail changes were made in the Mk2 version, launched in 1973 (only three years after the model was introduced). However the damage was done and the world, once so enamoured with Triumph’s burly roadburner, shunned the Stag. It was killed off in early 1978 after only 25,877 had been built- Triumph had anticipated those sorts of sales per year. In the USA, the market that the Stag was designed for, only 2,700 found homes.

That’s the story, but time can heal all wounds so what’s the Stag like in 2012?

Outside
It can not be denied that the Stag is a good-looking car. Not beautiful, but good-looking none the less. Triumph and the Italian design house Michelotti had a long and successful partnership. The Stag brilliantly combined Triumph’s house style, found on the 2000 and Spitfire, and making them work on a larger, more powerful car. For example the swooping ‘haunches’ of the Spitfire are still on the Stag but as more muscular wheelarches. Like the 2000 and the TR6 the front and rear ends are largely symmetrical. As required by US regulations the car has four circular headlamps which help give it a front end that means business. Federal regs also required the fitment of a rollover bar which on the Stag is neatly integrated into the B-pillars with a fixed padded T-bar over the passenger space.

Inside
Inside it’s business as usual for a 70s Triumph. The company was relatively unusual in the BL stable in having a recognisable design language that it applied consistently across it’s range, both inside and out. Any Spitfire, TR, 2000 or Dolomite driver would be right at home, with the dashboard being made of several slabs of Fablon lined in black plastic and vinyl with a scattering of Smiths gauges with an oh-so-Seventies blocky font and square-ended needles. The cockpit is deeply trimmed in padded black vinyl and black carpets. The seats are also black vinyl, but are scuplted and well padded with a squidgy centre section and firm edges which hold you in place well. The driving position is rather odd, the Stag being one of those cars where the pedals don’t line up with the steering wheel which doesn’t line up with the seat. Earlier UK-spec Stags lacked standard power-steering and so had a steering wheel similar in size to that found on a Series Land Rover. This later Mk2 example has a more sensibly-sized wheel with a simple but sporty 3-spoke design. 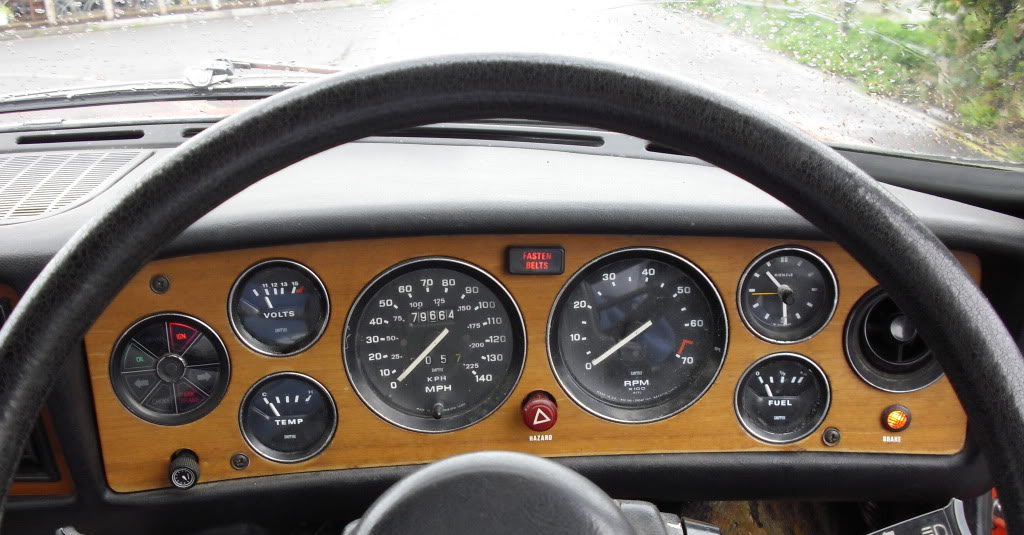 Enough wittering about the interior furnishings- this is a MAN’S CAR. Like most engines of its type the V8 spins over quickly. It fires easily with a little choke and quickly settles down to a subdued and refined idle. The engine doesn’t roar or burble but simply makes its presence felt with a subdued rumble, rather like the distant throbbing of a cross-Channel ferry’s engines. It’s not loud but it suggests immense power.

The gearbox is not the Stag’s good point. It’s a lightly updated version of the 1950’s Triumph TR2 and really struggles to stay together when faced with more than double the power and torque it was designed for. It’s not an especially slick gearbox, especially when cold but the shift is well-defined. The problems are upchanges under power. The ‘box locks up under all but the lightest throttle openings making it impossible to snatch the next gear under even modest acceleration. You have to wait for things to settle down a bit before easing the stick into place. Downchanges are no problem (the box is fully synchro) although the transmission appreciates being helped out by double-de-clutching if you want things to happen quickly. The Laycock overdrive is selected by a flick-switch on the gearknob and is one of those little theatrical touches that seem to be lacking from modern cars. The unit itself cycles quickly and freely, even under load and, whilst it’s desperately immature, you never get bored of booting the throttle and then flicking the switch to ‘Out’ so the car takes off like you’ve just selected some magical ‘overboost’ function. The overdrive is electrically interlocked so it disengages if you select 1st or 2nd and then re-engages if it’s selected when you move into the top two gears.

Ride and Handling
The Mk2 Stag had hydraulic PAS as standard but it’s clearly set up for American demands, being very light, over-assisted and over-sensitive Whilst this may be fine for cruising at 55 MPH in a straight line it takes a lot of gettnig used to on your average British B-road as you find yourself over-correcting and then over-correcting-correcting every little movement. Fortunately the car itself cruises beautifully and tracks well. With fully independent coil spring suspension the Stag suffers none of the twitchyness and bump-shudder that afflicted its smaller stablemates and it takes serious irregularities to upset it. Genuinely comfortable sports cars were rare in the 1970s but the Stag was one of them.

Performance
Of course, the ‘deal’ with the Stag is it’s engine- simultaneously the biggest attraction and the biggest problem. Let’s just say that it’s a 3-litre, 140 BHP V8 in a 1200kg car so it’s going to make some noise and go quite well. Which it does. The engine expels its gases through two large-bore tailpipes so it doesn’t make the frantic bellowing roar of a Rover V8 in sports mode. Instead it sounds much more like a big Yank iron V8 with lots of burble and bass. When driven gently it wuffles away to itself and, exhaust note aside, is virtually silent apart from the large cooling fan. Step on the right pedal hard and it sounds like an old church organ winding up for the last few chords of Jerusalem. Like all V8s the power delivery is instantaneous and turbine smooth. With OHC and alloy heads the engine revs freely right up to the 6,500 redline if you wish, with the noise becoming a smooth baritone growl at the higher speeds. The cylinder dimensions are massively over-square so you don’t have quite the same indomitable grunt at idle speed that other engines of the same size can deliver. However you’ve still got 8 cylinders banging away and the engine will happily cruise around in O/D 4th at 1,700 RPM and still accelerate cleanly. In fact you need to be careful in the bottom two gears otherwise you’ll easily get a chirp from the rear tyres. You’d expect a V8 RWD car to be a bit tailhappy but whilst the Stag will happily spin its rear tyres on a damp roundabout it would require properly deficient driving to actually get out of line thanks to the sweet handling.

Conclusion
By modern standards the Stag is not a fast car- 0-60 can apparently be done in around 9.5 seconds but I don’t see how the gearbox will let you do that. In normal driving you would struggle to keep pace with an executive turbodiesel. But classic cars aren’t about outright performance but the way they deliver what they have and few cars combine character and refinement like the Stag. It has just enough drama, noise and wind-in-the-hair to be fun even when just bumbling around town without the full sensory assault that, say, an MGB subjects you to in daily use. The Stag has always defied attempts to pigeonhole it. It’s not a true sports car (it’s too big, too soft and it has four seats and a big boot) yet it’s not quite luxurious and refined enough to be a true GT. In fact the car is a split personality through and through and that makes it a wonderfully tempting proposition since it seems to cover so many bases.

Four decades after it was introduced we can now look past the company-afflicted problems that the Stag suffered (which have all been solved by various aftermarket groups) and see that, as usual, BL had a world-class product which they just couldn’t build properly.