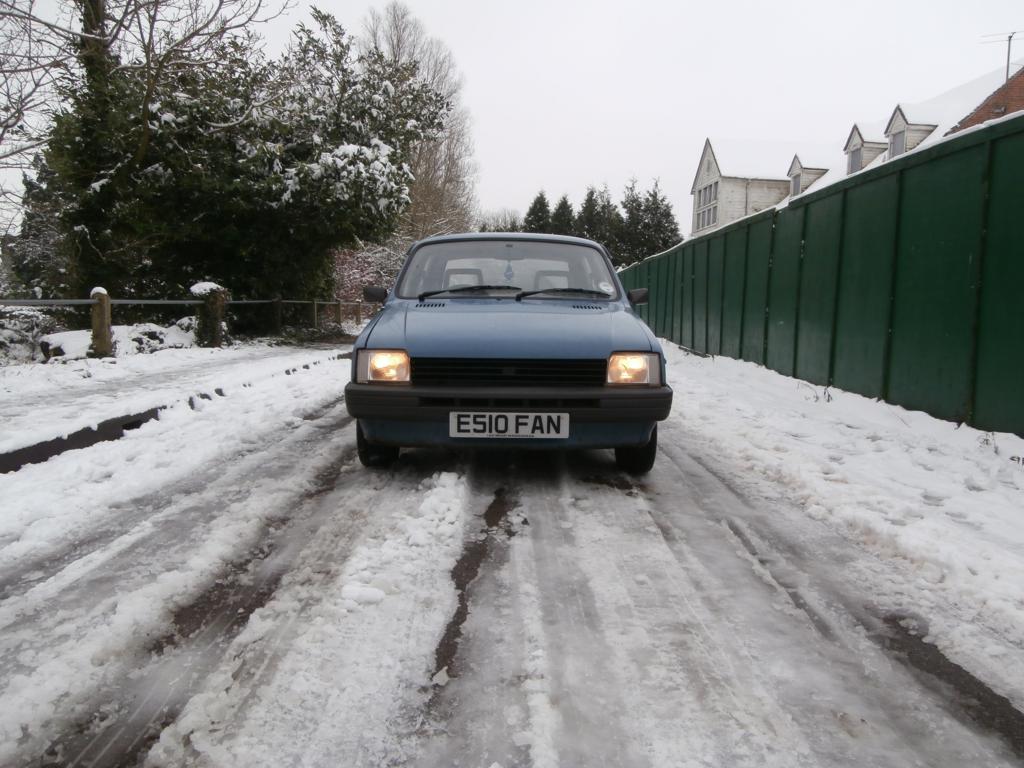 The Metro has now been on the fleet for almost exactly three months. I did a Trip Report on going to pick it up and a review of my first impressions, so I thought it would be a good idea to take stock of how things have been going and if those first impressions were accurate.

I’m pleased to report that we’re still on very good terms. In fact, the occasional flat battery aside (more of which later), the Metro has not given a moments trouble. On the one hand this shouldn’t be too surprising as it is essentially a brand new car and, all Austin-Rover jokes aside, you’d expect it to still be pretty fresh at 27,700 miles. I’ve now done 1,700 miles in the little blue car. Considering that its average annual mileage over its life averages out at a smidge over 1,000 miles a year I’m surprised that it didn’t suffer something of a shock to the system on suddenly being pressed into regular service hammering around the motorway network.

The Metro impressed me on Day One with its load carrying abilities and those have been put to further good use. People will always say that the Mini is a packaging masterpiece but really the Metro is even more so- you can get five people inside in something approaching comfort and still have useable and decently-sized boot. The Metro’s cavernous hatchback has swallowed up (simultaneously, I should add) a Casio keyboard, a mountain bike, a pair of Alfasud front wings, a bag of laundry, a pair of Guitar Hero controllers and a plastic crate of miscellaneous ‘stuff’. You can’t do that in a Mini. Or many modern superminis, for that matter. 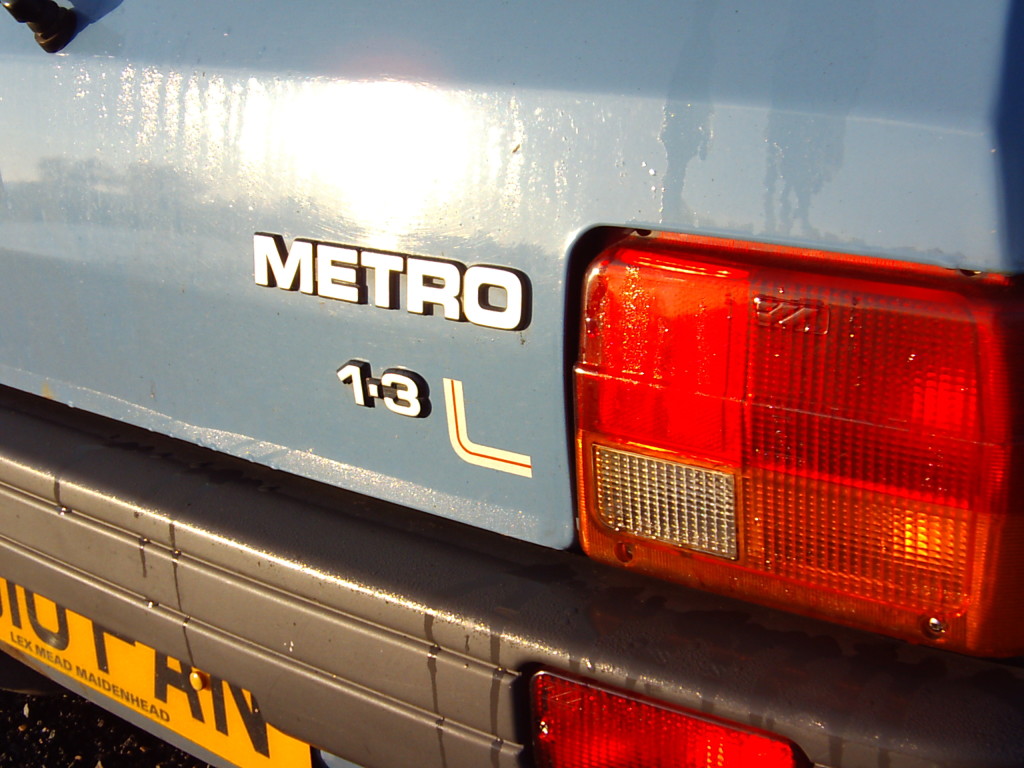 As a car my long-term complaints about the Metro are pretty similar to those levelled at it back in the ‘Eighties. Although the A-Series engine is gutsy and economical it does have refinement problems. It could really do with a 5-speed gearbox and I’ve just about cured myself of the habit of trying to put it into ‘phantom fifth’ on the motorway (something that I’ve never tried to do in the 2CV, by the way, which makes much better use of its gear ratios). Not that this seems to affect the fuel economy, which stands resolutely in the high 40s/low 50s.

Although the interior is spacious the driving position is weird. Not uncomfortable, just weird. The interior, even on this ‘new’ car is made from some immensely cheap-feeling materials. Now the Metro (especially a basic 1.3L like mine) was a cheap car but I’ve never come across dashboard plastics that can seemingly be scratched by the air current of a foot or fingernail passing too close. The indicator stalks (stock Austin-Rover items found on everything from the ‘Eighties up to and including, to my delight, the Range Rover) are horribly flimsy and rubbery to use. Contrast with the clockwork precision of a Mk2 Golf’s switchgear.

In terms of actual issues the most prominent has been an intermittent but total battery drain. This proved hard to pin down because the car could sit for a week unused and be fine then the battery would go flat overnight. I tried pulling fuses with a multimeter measuring the draw on the battery with no success. I cleaned and freed off the totally stuck interior light switches to no avail. I then started disconnecting the alternator between uses (only once forgetting to reconnect it – “I’m sure the headlights are getting dim…Oh!”). That seemed to sort it and I was all ready to start ordering diode packs when the battery flattened itself just as the snows began to fall. So I’m back to square one and now suspecting the radio/CD player just because it’s the only vaguely sophisticated electrical item in the entire car.

The first time my Dad heard the Metro running his immediate response was “It’s hissing too much”. I thought it sounded fine and the slight sibilance at idle was normal SU carburettor noise. But then my Dad has been around A-Series engines for twice the time I’ve been on this Earth so is not someone to ignore on such matters. In a matter of seconds the problem was found- the vacuum pipe from the carb to the distributor advance had broken at the carb end, leading to an air leak. Put a finger over the hole and the hissing disappeared and the engine’s idle, which had always seemed smooth in an ‘engine from the late ‘Forties’ sort of way became literally sewing-machine like. The solution was easy- just fit a new vacuum hose. One of those nice little jobs that requires no tools, takes 5 seconds but makes a noticeable difference. 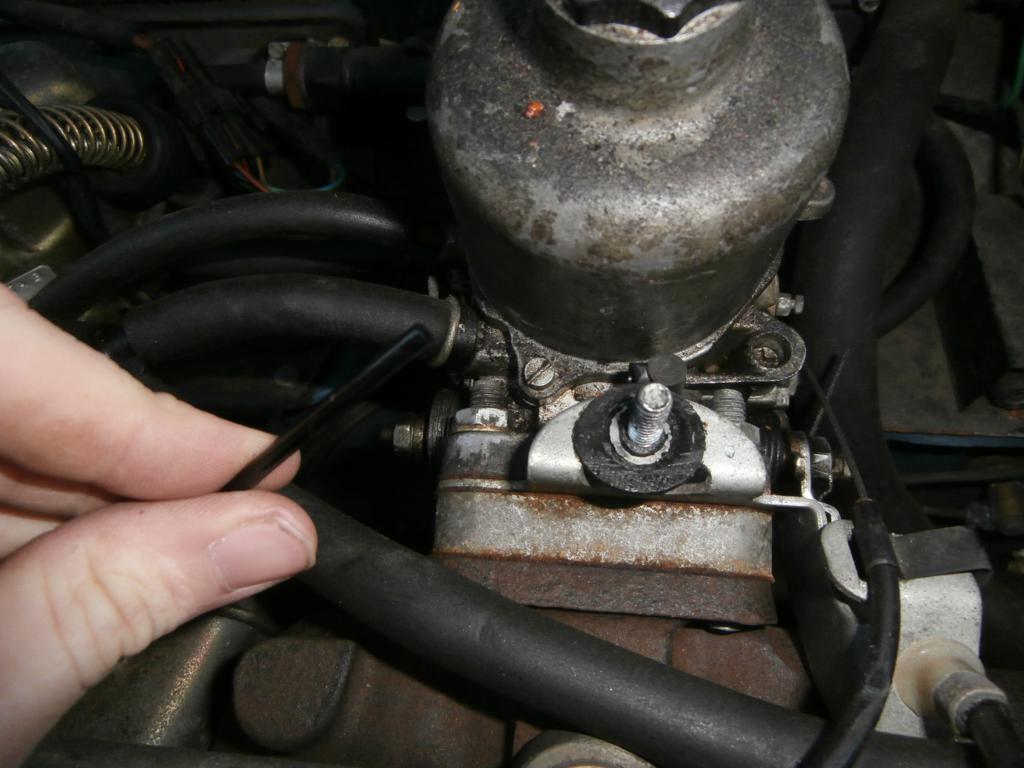 Broken vacuum hose was easily fixed and made a noticeable difference.

The only other ‘issue’ is a strange noise from the driver’s side front wheel area. It’s intermittent , is related to road speed and nothing else, and sounds for all the world like the loose end of a cable tie on a propshaft gaiter rubbing on something as it turns. Except that it isn’t. The noise comes and goes at random. There is no wear or tightness in the wheel bearing on that side and the brakes aren’t dragging or worn so that particular quirk is currently on the ‘monitor and ponder’ list.

I’ve been to a couple of shows in the Metro, both of which confirmed my suspicion that it’s still not considered a proper classic by more than a few people. Sod ’em. Enough said. 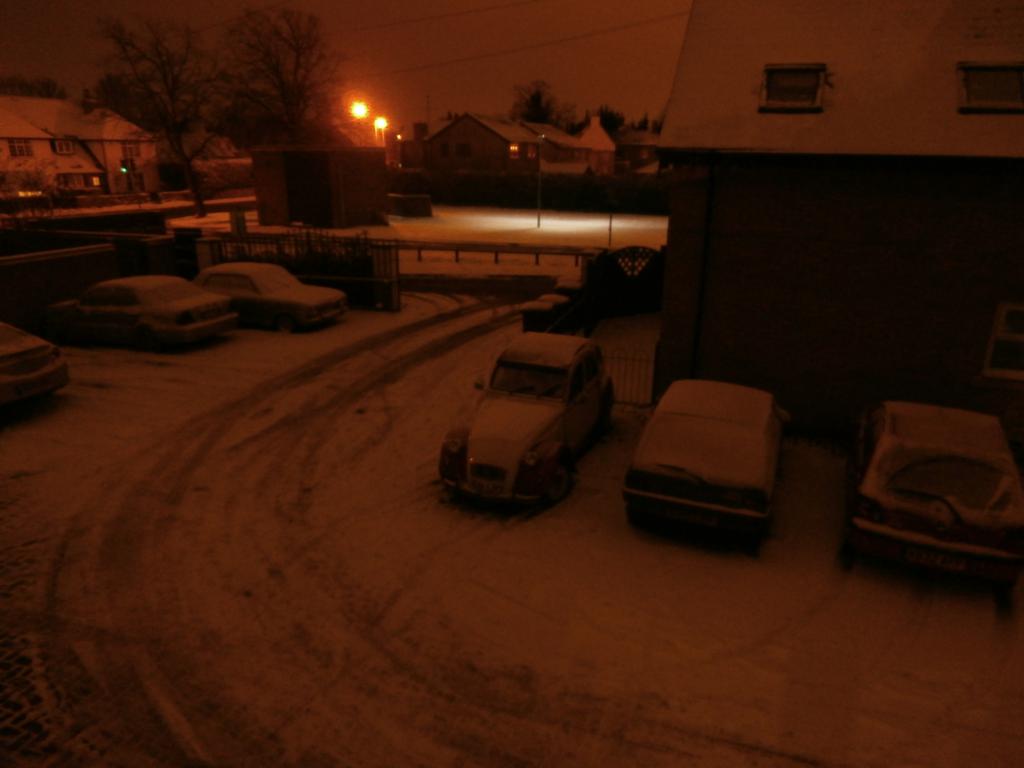 I should also briefly mention the SNOW CHAOS a few weeks ago. When we were being advised to avoid travelling unless strictly necessary I drove 200 miles from Peterborough to Hampshire. A part of me was hoping that it would make for exciting blog entries about a plucky Metro battling through blizzards as BMW 3-Series slewed wildly across the road but it was actually an entirely ordinary sort of trip. In fact it was one of the best trips I’ve had because the roads were completely deserted. 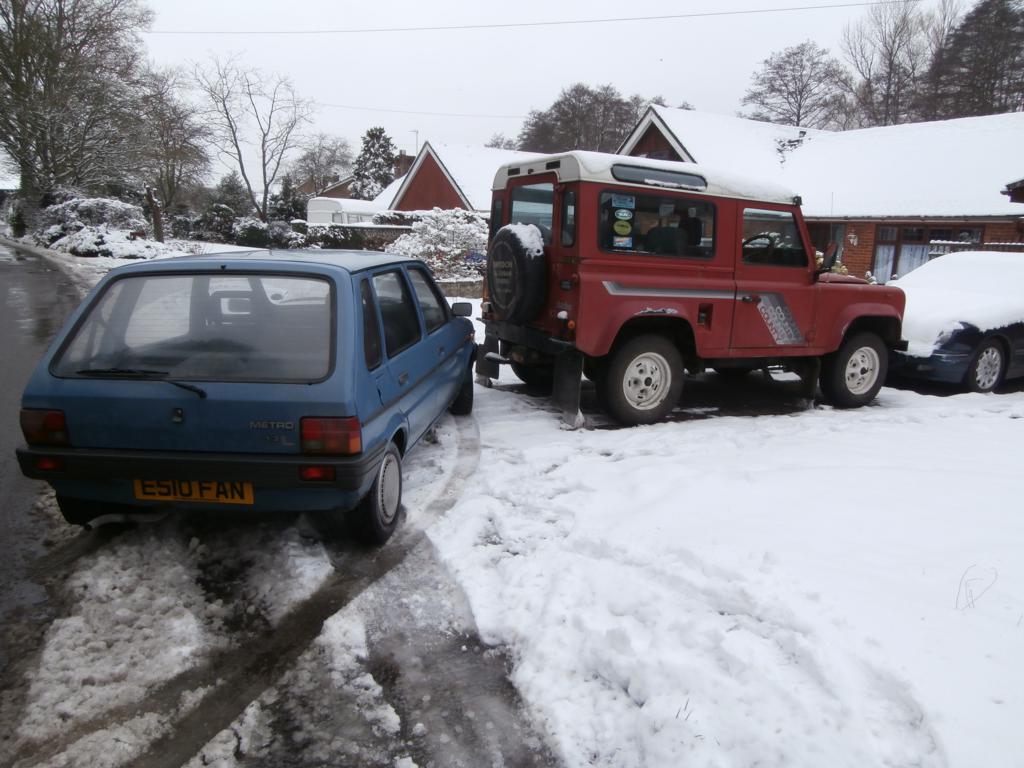 The final thing worth mentioning is that over Christmas I put the Metro over an inspection pit and, with moderate dread, had a look underneath it. Pleasingly the structure is as sound as the external bits, even given the rather half-hearted Longbridge undersealing. The front edge of the passenger’s side sill is getting rather  scabby and will need remedial action sooner rather than later but otherwise no drama to report. 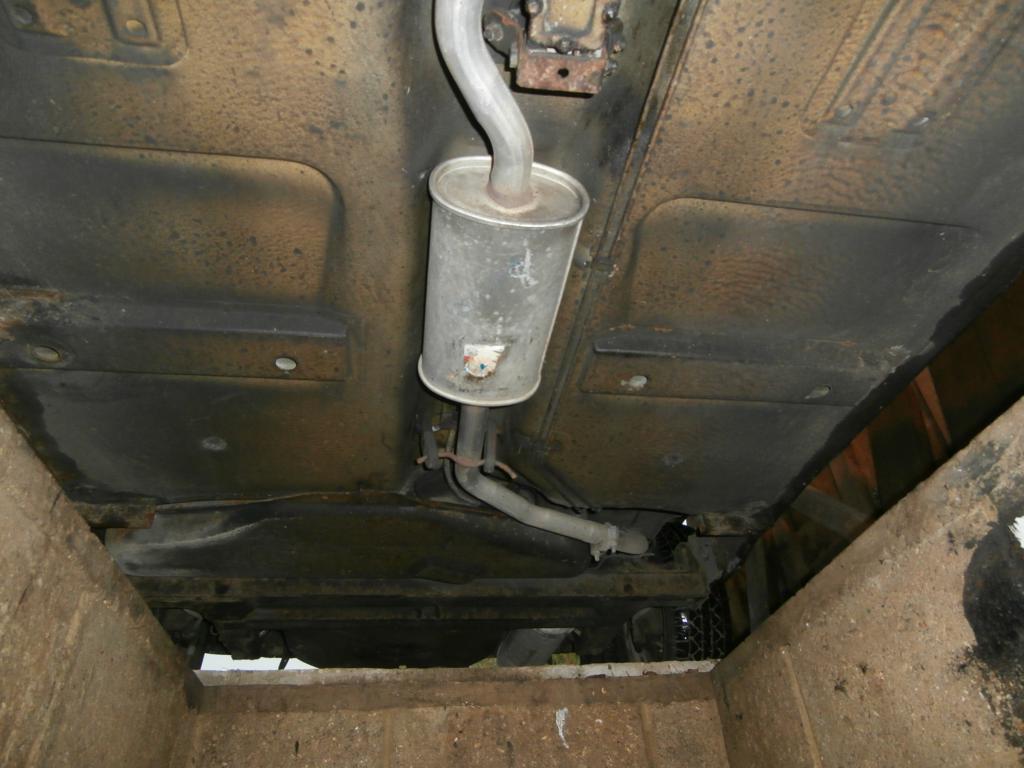 The inspection pit holds no fear now. The Metro is very presentable underneath.

The Metro has just passed its MoT so is all paid-up and legal for the next year. Bring on the next 1,700 miles!