Way back in the far off days of, erm, two months ago, my first entry on this website concerned the MG6 and my worry that the company was throwing away a generally good product due to a complete lack of any appreciable marketing presence. It ended with a single throwaway line:

And try to remember that multiple touring car wins only help your brand if you TELL SOMEONE ABOUT THEM.

That was back when the BTCC season had only just got going. Despite the MG car’s success I was going to give the company the benefit of the doubt that they were just letting the momentum build- after all it would be embarrassing if they heavily plugged a podium finish in the first race and then it turned out to be a fluke.

But no. As usual MG seem to be operating on the basis of telepathy where we will all magically know about their sporting success without them actually telling us about them.

As a dedicated follower of British Leyland I take an interest in what MG is up to. The fact is even though I know the company exists, and where I can go to find out what’s happening it’s still something of a struggle. The company has a decent presence on Facebook and Twitter but you have to already have found MG before you can find those networks. They spool off plenty of press releases to the automotive media feeds but that’s no good to the general public.

So given that I strongly suspect that 9-out-of-10 people stopped on the street wouldn’t even known MG still exists and has cars to sell, you’d think that MG would be pushing headlines like this:

For all they were worth. But no. Outside the realms of the BTCC itself and a few dusty corners of the internet this doesn’t get mentioned. It’s worth emphasising an MG took podium positions, including a win, in three races over a single weekend. That’s not an isolated thing, either. That was Jason Plato’s performance in the MG6 last weekend at Rockingham. He did the the same thing at Snetterton the week before. Mr. Plato is currently in third place overall. 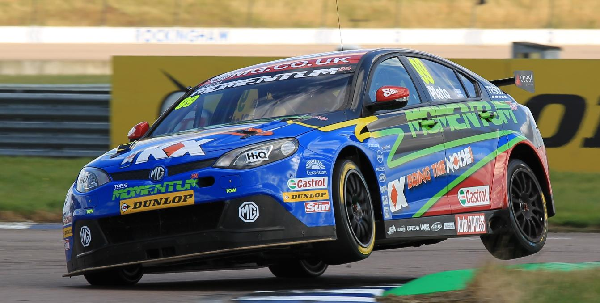 And not a dicky-bird have the general public heard about this from MG. Ford coined the phrase ‘Win on Sunday, Sell on Monday’ for the effect motorsports can have on sales of car, and it’s true. It’s doubly so for MG which is a sporting brand, forchristsake. It’s like one person in the marketing department at Longbridge had the one really good idea of entering Touring Cars. They’ve now left or gone on holiday and no one has followed up on the idea.

It should work. MG still resonates as a sports car brand with the general public, but it has no real cred and no one trusts it anymore. Most people think the company’s dead. What a way to get back into the public mindset in a positive fashion that with a massive ad campaign highlighting a string of genuine sporting successes? There should be huge billboards everywhere, and a sporting MG6 special edition (MG6 GTBTTC, anyone? No?). They should do another TV ad with footage of lowered, tuned MG6s screaming around Snetterton thrashing Volkswagens rather than endless sepia-tinted fake cinefilm of an MGA. They should get the MG6 onto Forza Motorsport and GT5 in normal and racing trim to get some extra exposure with people under retirement age who aren’t already MG enthusiasts. There- in a paragraph I’ve come up with four more ideas than the people at MG seem to have done.

I did a double-take the other day when I saw the headline ‘MG Dealership Sells Two Cars‘. It turned out to be a story about a new dealership which sold two cars on the same day to two brothers. The thing is that headline would be newsworthy in and of itself, considering that if 11 cars were sold last month, all at different dealers, that still leaves a majority that didn’t sell any at all.

I’m not the only one to speculate that MG are playing a long game and saving the real marketing push until more desirable and sellable models, such as the perpetually ‘Coming Soon’ MG3 supermini, reach the UK. I still think there may be some truth in that given how limited the general appeal of the MG6, for all its good points, is. But then why spend all this money on Touring Cars? It won’t do any good come 2013 because the season will be done and dusted and the impact will be lost.

The MG6 is not a bad car. In many ways it is a very good car. It’s just being let down by a complete lack of interest by the very company that makes it. I don’t understand why but it’s infuriating and a little depressing.