I’ve been living the full-on life of a British Leyland car owner in recent months, with the Land Rover and the Metro in regular service. Such a heady existence can only be carried on for so long, though- too much of the high life is a bad thing. Alright, if I’m honest the Land Rover costs a small fortune in diesel and the Metro has revealed itself to have, effectively, half a radiator so it has not been enjoying the recent heat wave.

If only I had a car that was economical to run and, instead of using new-fangled water, cooled itself with the very atmosphere that surrounds it. Of course, I have just such a car in the shape of the 2CV so it was time to inflict the Land Rover (which is big, unattractive, unpleasant to drive and too tall to go in a garage) on my parents and reclaim the Citroen.

Despite being garage-bound for a couple of months the 2CV proved faultless on the trip back to Peterborough, with the exception of having  to replace a blown tail light bulb half way up the A1. On a balmy summer’s evening with the temperature hovering in the high-20s I can think of few cars I’d rather drive than a Deux Chevaux with the roof rolled back, the windscreen vent open and the door window flapping in the breeze.

It so happened that the day after I brought the 2CV back to the Midlands it was the Citroen Car Club‘s National Meeting in the glamourous environs of the world’s oldest amusement park in the vibrant urban centre that is…Kettering.

I’m not a member of the CCC- although not explicitly stated, it’s always been heavily implied that the CCC is for ‘big’ Citroens while those with a penchant for sandals, home knitwear and cars with suspension that, boringly, has only one height setting go and join 2CVGB. Of course, I’m exagerating for comic effect but there does seem to be a slight ‘stylistic divergence’ between the two groups. Clearly not a very big one, though, because 2CVGB members gained free entry to the CCC event. In fact, as I found out, even lapsed 2CVGB members with an expired membership card, get waved in. Further proof that under all the leg-pulling and gentle stereotyping the classic car scene is one big, happy family.

If you haven’t figured out already from that fact that this blog’s stupid name is derived from, and shamelessly rips off, the mascot used to advertise the Citroen DS’s oleopnuematic suspension system (“The flexibility of air and the comfort of water” was the tag-line, which probably just confused people even more) I’m a big fan of ‘proper’ classic Citroens.

And, my, was there a good crop at Kettering. With the exception of the GS and the AX there was every post-war model on show, from Traction Avants (still one of the most inherently graceful cars ever built, in my opinion), through H-Vans, DSs and a solitary ID with a glorious patina, a crop of CXs, a whole herd of BXs and a baffling variety and number of Xantias. There were also Visas, a lone SM (the pinnacle of ‘proper Citroens’), the wedge-shaped glory that is the XM and its Art Deco successor, the C6.

There were also brand new and nearly-brand-new examples- a DS5, a DS4, some DS3s (including the deeply unsubtle DS3R hot hatch) plus some of the downright ordinary or forgotten models like the C3, the C3 Pluriel and the C4 Picasso.

I haven’t even mentioned the 2CVs yet, because there were a good two-dozen or so. A predictable turnout of red and white Dollys like mine (of which mine was, shamefully, the only one with rust bumpers, a covering of road grime and a big petrol stain down the off-side rear wing), but some more standard models as well. No ripple-bonnets, though, which was a shame.

I know that the CCC isn’t strictly a classic car club and that, as its name implies, open to all Citroens, but I was (pleasantly) surprised to see all these cars of all ages, and their owners, mingling. Without wanting to get all smug and preachy, there might be something in the whole ‘Citroen thing’ about this. Yes, an old Citroen is, by definition, something of an oddball choice but even that runs the gamut from a £300 BX estate with saggy suspension and mismatched body panels up to an SM worth the heavy sideof £30,000. I guess the common factory is that they’re all ‘different’ but all have a bit of that unique Citroen flair, even rather unloved ones like the Pluriel or fresh-out-of-the-box stuff like the DS5. While many argue about when Citroen stopped making ‘proper Citroens’, the point stands that even a DS3 is a more original choice these days than another German or Korean bland-o-matic hatchback.

So ‘Yay!’ for the Citroen Car Club and its open-minded policy towards Citroens of all sorts and people who turn up unannounced in rusty 2CVs and who aren’t even members. 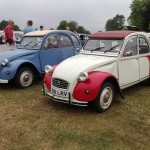 I can see why hard-core 2CVers get fed up with Red-and-White Dollys, turning up at shows and not putting in any effort! 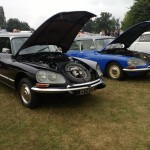 This is a rare case when seeing a DS with its bonnet up does not signal an imminent large repair bill. 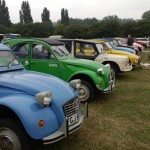 Amazing- not a Dolly to be seen. 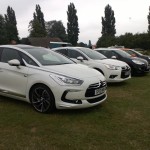 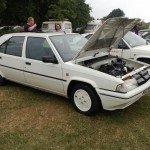 BXs ranged from this immaculate St. Tropez edition in white with added white… 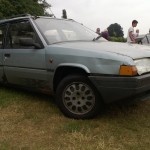 …to this wonderfully horrible estate with various, erm, issues. 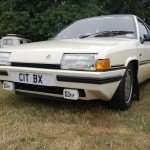 Back in the ‘Eighties you could have a sports model that was a) a Citroen b) on hydraulic suspension and c) was the colour of aged newspaper. 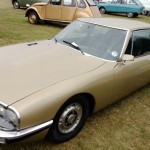 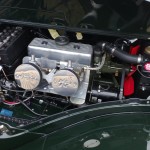 You don’t expect to see K&N filters and SU carbs under the bonnet of a Traction Avant. 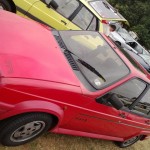 PSA’s wild child of the ‘Eighties. It would go round the Pug 205 GTi’s house for Christmas, there’d be a big fight and they wouldn’t talk again until the next year. 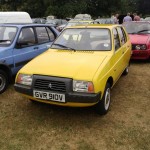 I’ve never seen a Visa on the road. Do they spontaneously appear at car shows? 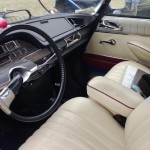 The only car interior to be modelled on a Salvador Dali painting. 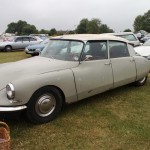 An ID19 from New Zealand, of all places. In Kettering. 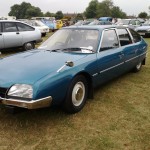 This very early CX22 is entirely original and utterly glorious in every way. 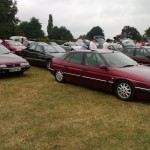 XM. The Car Nobody Wanted. 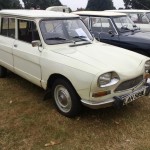 For people who think the 2CV is too normal, there’s the Ami Break. 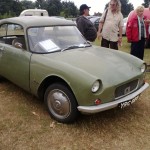 The 2CV-based Bijou. The first (and only) Citroen to be designed outside of France. It didn’t go down well.