Confession time- for all my talk about how bad cars are interesting and, particularly, how most British Leyland products aren’t anywhere near as rubbish as most people say, I have never actually owned a BL car. Yes, my old Series III Land Rover was technically a BL product, and it had the Flying Plughole logos on various bits to prove it. My current Land Rover is also a design from the Leyland stable. I’ve done a fair bit of ‘ownership by proxy’ thanks to my family’s long dedication to BMC-BL products old and new, but when it comes down to it I’ve never had a proper BL car as my own transport, with my name on the logbook.

Well as of 1:30pm today that’s changed because I’m now the proud owner of a 1987 Metro 1.3L 5-door in that delightfully Leyland shade of blue that looks faded as soon as its sprayed on the car. 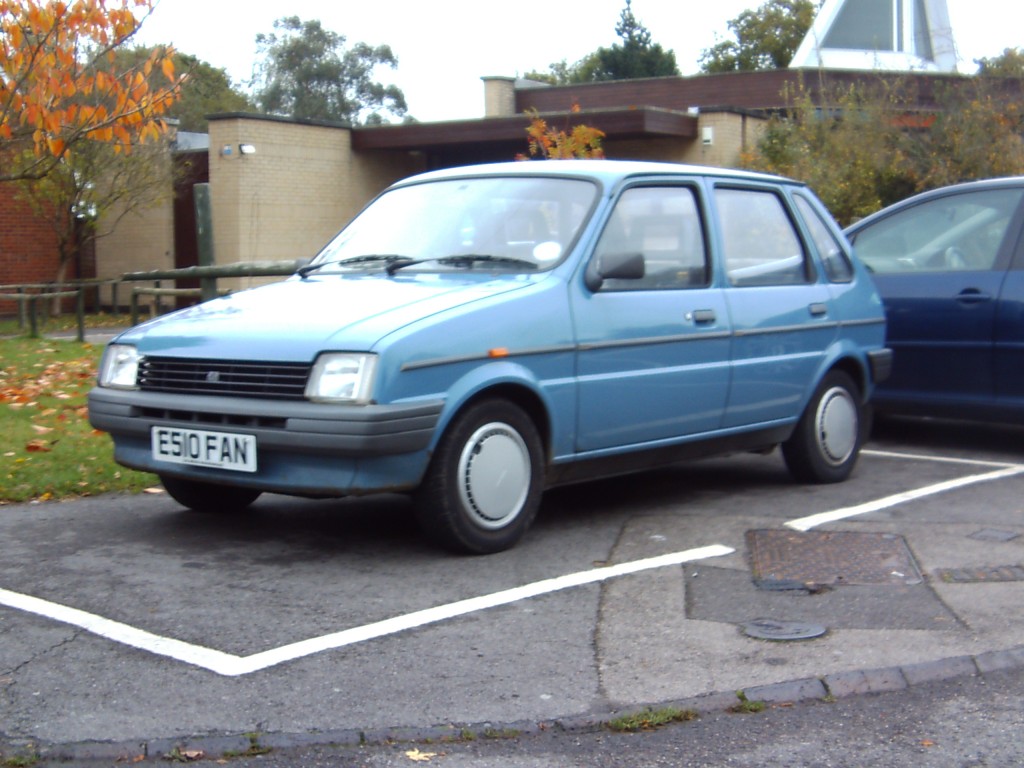 I suppose you could be really, really picky and say that that’s not really a BL product either, because it was built a year after BL ceased to exist. I don’t care. As far as I’m concerned it was conceived and designed by BL and it’s got the drivetrain out of a Mini, Hydragas suspension, styling by Harris Mann and David Bache and it was built at Longbridge. It counts.

I wasn’t after a Metro in particular when I was looking for a car to put an end to my hypocrisy, but it makes a lot of sense. It’s a car I can actually remember being around when I was growing up, my parents had both of its other M-Car stablemates (the Maestro and the Montego), it’s a thoroughly known quantity mechanically and ‘Eighties Metros are getting pretty rare.

This particular one is stunningly low-mileage with just under 26,000 miles on the clock, so it’s A+ Series engine is barely run in. It is wholly original in specification apart from a modern CD player (the original push-button radio/cassette is in the boot), right down to the Metro-branded floor mats and a wholly unused tool kit in the boot. The Hydragas at each corner is sitting at the right height and the only rust is around the front and rear valances. One of the wheelarches is showing the beginnings of a bit of bubbling but the crucial sills and subframes are spotless. More unbelievably still, all the segments on the digital clock still work. 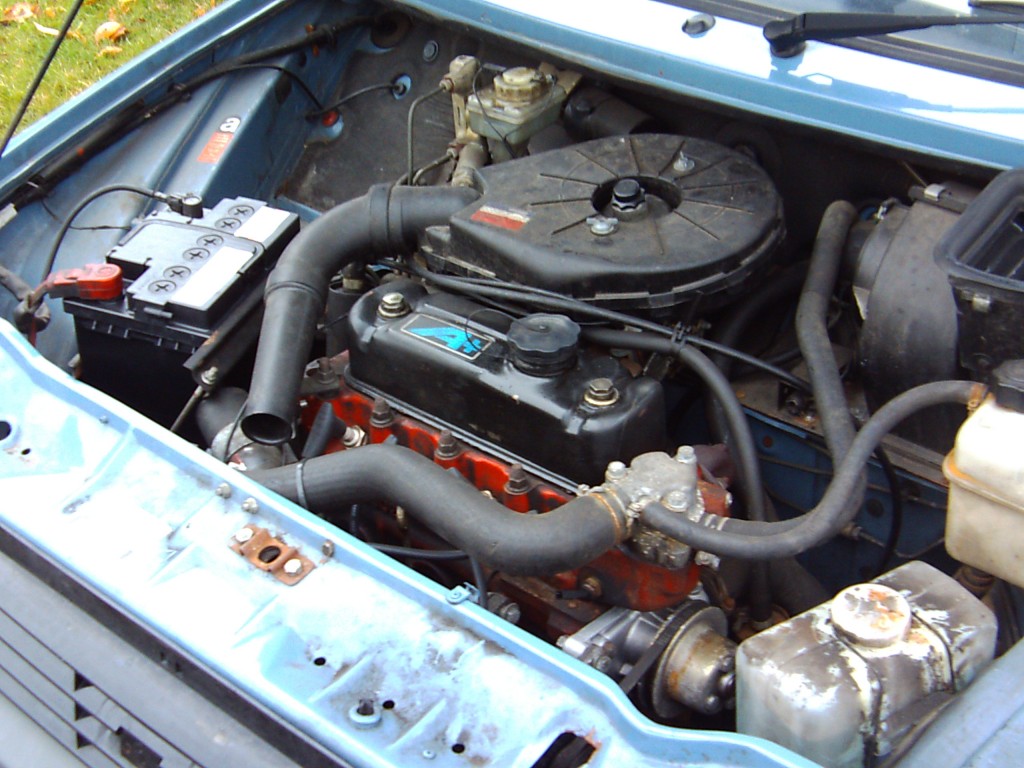 It came from Reading, where its owner (a bloke called John) had been using it for his 8-mile round trip to work on a daily basis and now wanted, of all things, a BMW E30 Touring to replace it. Having already made the trip to view and agree to buy the Metro the trick was to get myself down to Reading to drive it back.

I decided to Let The Train Take The Strain, and managed to get a through-ticket from Peterborough to Reading via central London for an unexpectedly reasonable price that, for once, actually made it cheaper to use public transport to get somewhere than to drive.

The first step of the journey on a crisp, very cold but bright autumn morning was to get to Peterborough station using another ‘Eighties British classic vehicle, a 1989 Raleigh Mirage. Being a sports product from the ‘Eighties it is, of course, bright purple with neon green decals. It also has no chainring gearchange left and no chain guide rail so it sometimes jumps into low range when you go over kerbs. 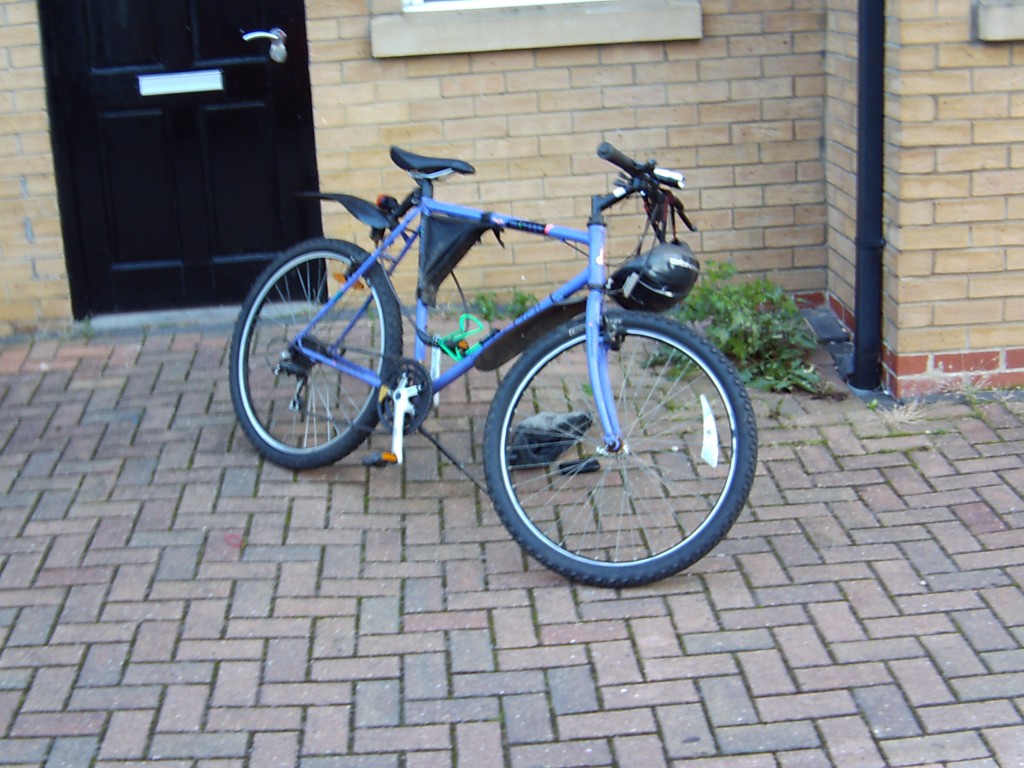 By the way, I apologise in advance for the shockingly bad quality of most of the following photos. They’re taken with my camcorder in ‘Stills’ mode and, whilst it can take decent pictures it has to be left to autofocus and ponder the mysteries of its existence for about 10 seconds each time. When bustling onto and off trains in London this is hard to do.

I opted to take the scenic route to the station via the scenic River Nene: 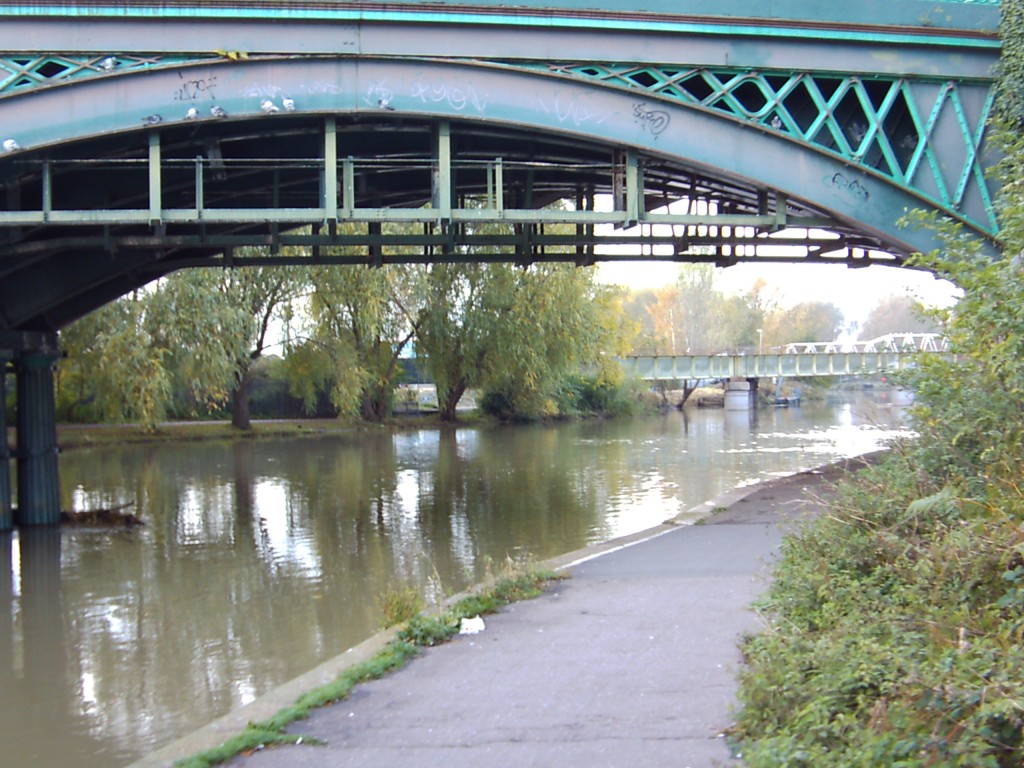 This proved to be a bad idea because what looked like an easy cut-through avoiding the hellish Charybdis that is the Queensgate roundabout turned out to be a huge detour along pot-holed roads through a semi-derelict industrial estate. By the time I’d made it to the station, found the bike park, wrestled the bike into the only available under-cover space (on the upper level of the rack) and collected the tickets the train was already at the platform and I made it on with two minutes to spare.

Anyway, two minutes is enough and soon we were hurtling through the flatlands of Camebridgeshire. There was nothing else to do but to play a little of Sierra’s classic classical city-building game, Caesar II. 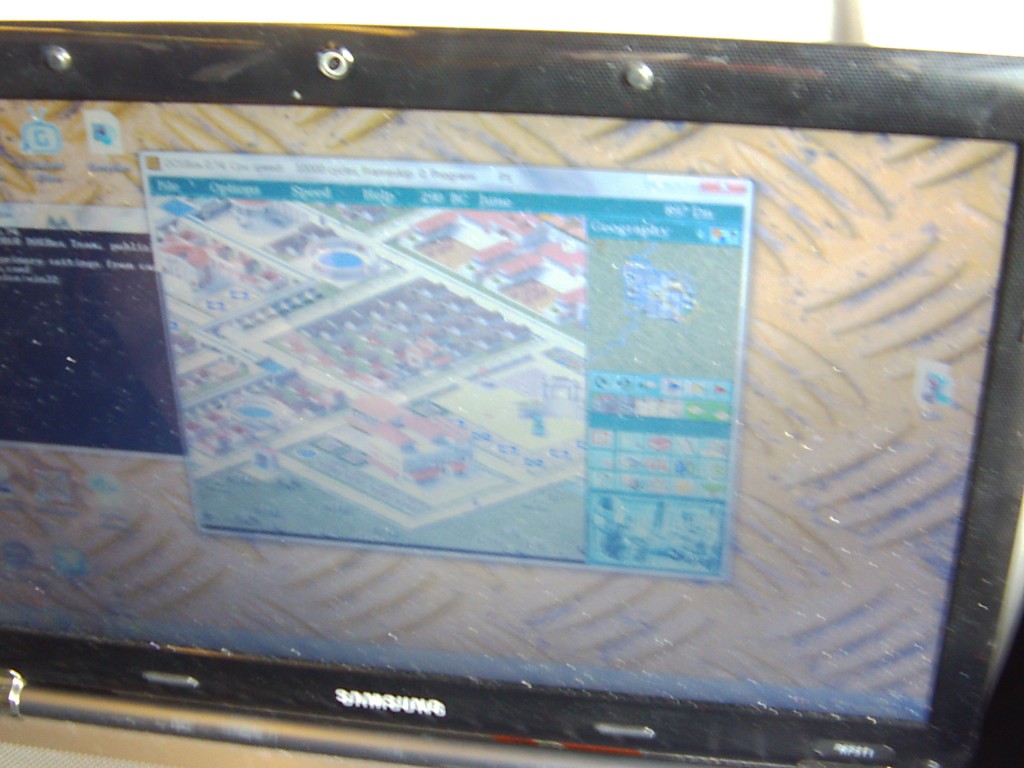 All together now- “Plebs Are Needed!” 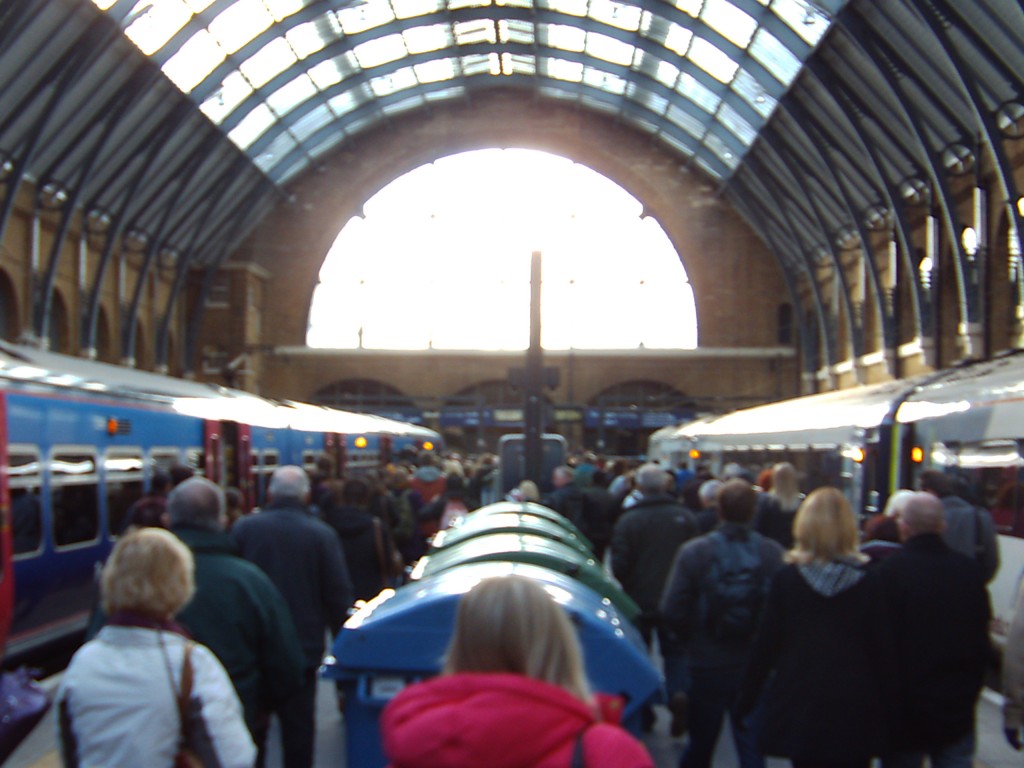 In just over an hour I was in the glorious Cubitt-designed trainshed at Kings Cross but there was no time to soak in industrial archaeology (or take decent pictures). After walking for what seemed like half a mile in a giant circle I made it onto the Hammersmith & City Line for what should have been a simple 5-stop jaunt over to Paddington for the train to Reading. 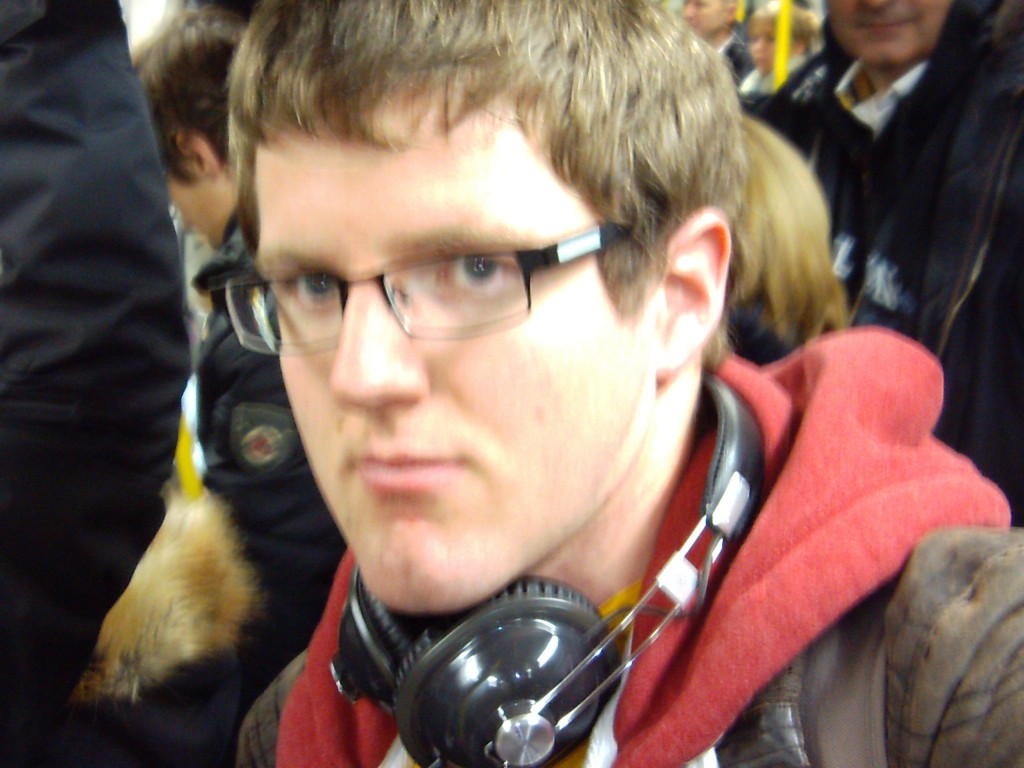 I said ‘should have been’, because at Baker Street, we were told that the train wouldn’t be stopping at Paddington after all so it was time to make a dash to the Bakerloo Line. This involved another half-mile sprint through the old 1860s Baker Street station (which smells like a Gentleman’s Public Convenience, by the way), across into a newer bit and then, theoretically, down an escalator onto the Bakerloo platforms. But no: 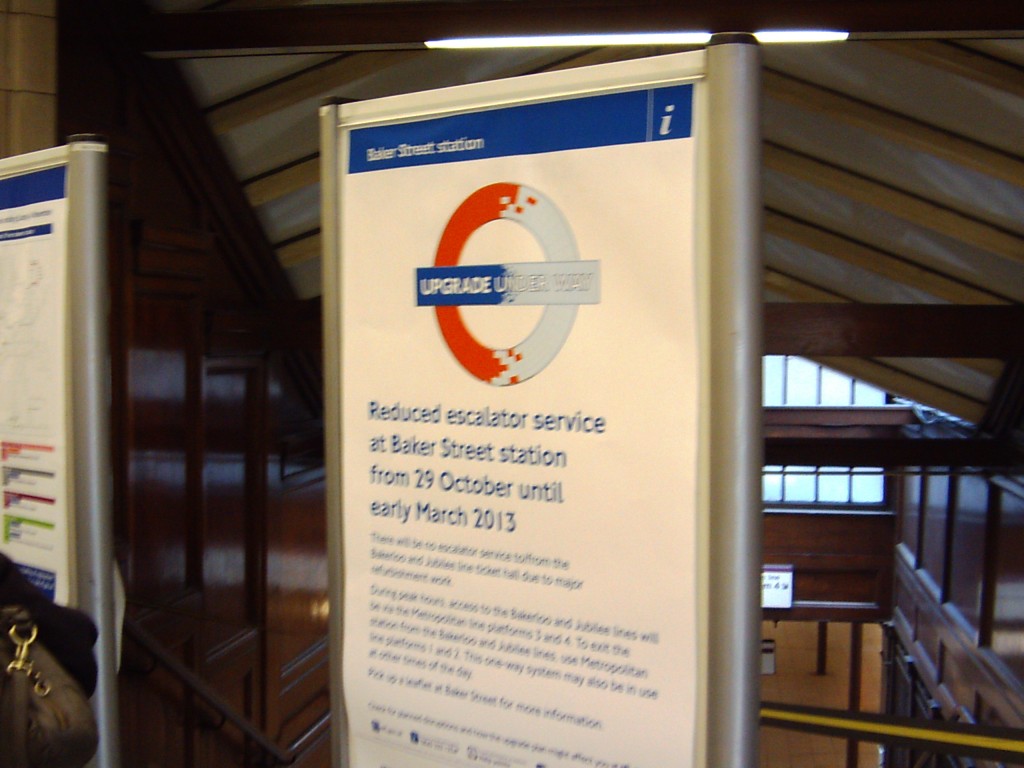 The escalator was closed for refurbishment, so it was a case of piling up onto the Metropolitan platforms then diving into another crossing tunnel, onto the wrong side of the Bakerloo station and then finally squeezing along a passageway to the correct side. 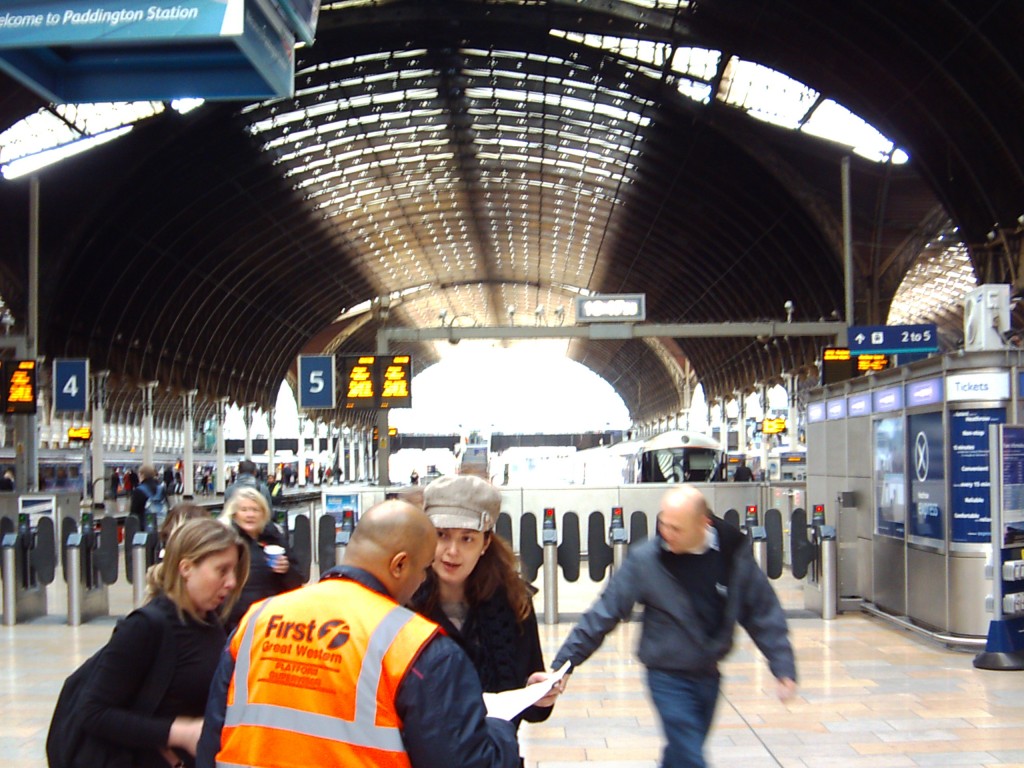 With the stress levels considerably elevated, I none the less made it to Paddington with time to spare- just enough time to grab a picture of IK Brunel’s famous roof (although not enough time for a planned-for and much-anticipated cup of tea). It was time to board another iconic piece of British engineering, albeit one now with a German drivetrain. 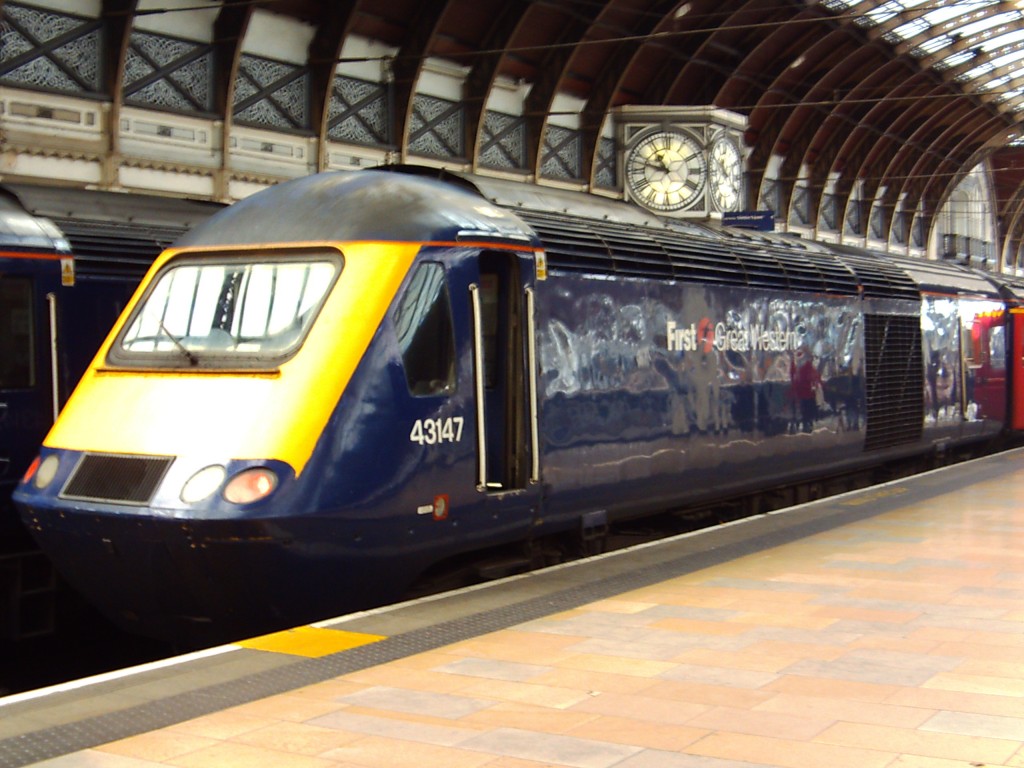 Unfortunately the High Speed Train didn’t really live up to its name due to weekend engineering works, so it was more of a Sedate Trundling Train that weaved its way around yellow lights right up to just past Maidenhead when a final sprint got me to Reading: 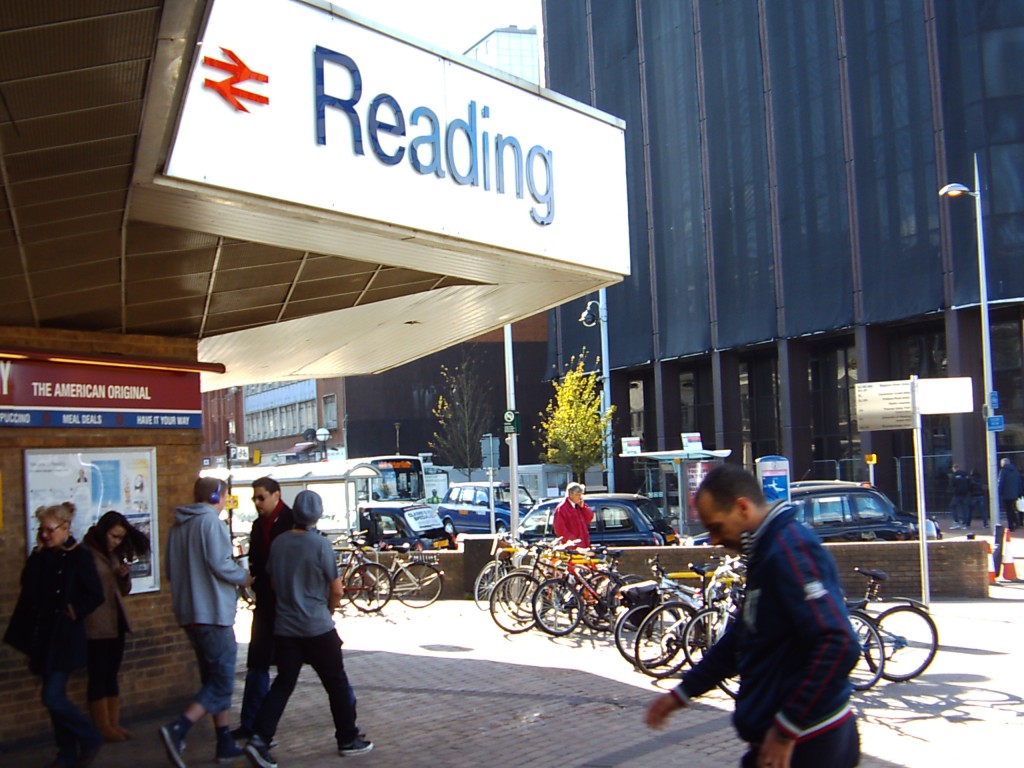 John was meeting me in Reading town centre, in the car park of a nearby Furniture Village. This seemed a suitably classy meeting point for the handing-over of a faded blue Metro.

The deed was done and soon I was steering the wedge nose of the Metro onto the eastbound A4. I’ll be doing a proper road test in the near future but the initial impressions are very, very good. As you would expect the Metro feels a lot like a Mini. The A-Series engine needs the same driving technique (use torque, not revs), the gearchange is the same, it makes the same fantastic whirring noise in 1st gear and the steering is still beautifully quick and direct. At the same time the Metro just feels like a much more grown-up, ‘proper’ car, something doubtless helped by the fact that this one doesn’t have a single rattle or creak from the trim. The only irritation was the clattering from the can of genuine Austin Rover touch-up paint which resisted all attempts to stifle it. 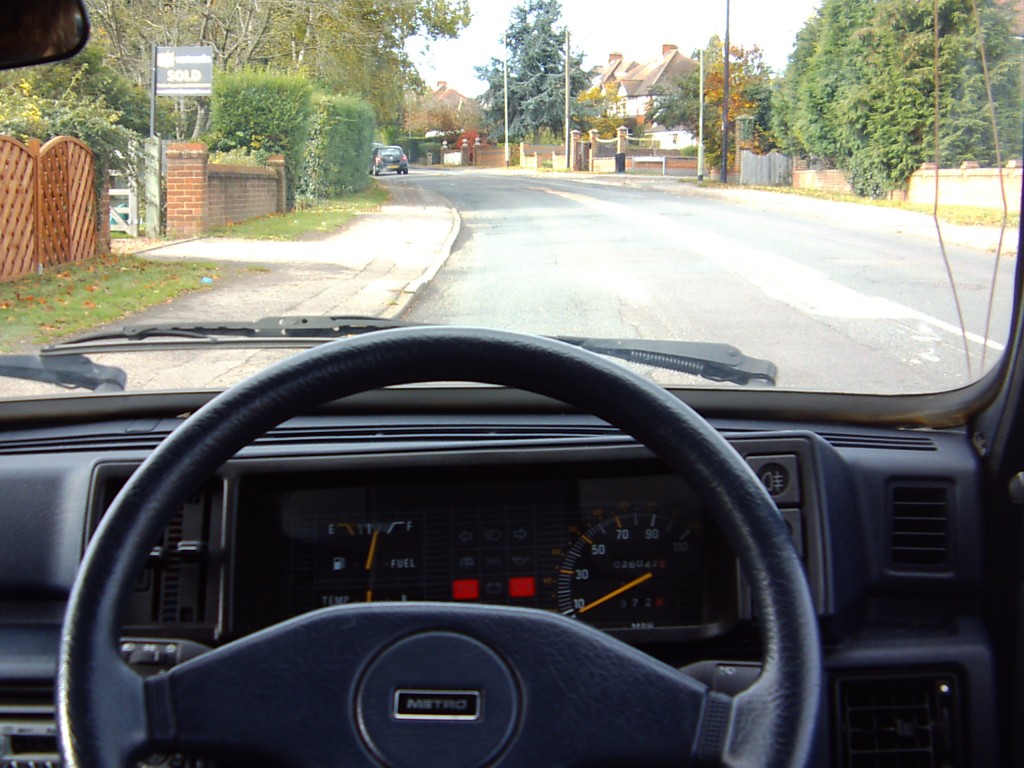 The Hydragas suspension is only half-formed on an early Metro like this, with no front/rear interconnection. Apparently this made the ride/handling noticeably worse but I couldn’t detect it. The ride is certainly ‘taut’ but the car doesn’t crash and jarr over bumps anything like a late-generation Mini.

The Metro isn’t a quick car. Given that it has 60-odd horsepower in a car weighing around 750kg it actually feels quite flat. It’s gutsy rather than nippy because it will pull cleanly at pretty much any speed and, as with my experience in A+ Series Minis it gets something of a second wind at about 65 mph. It will sit happily and easily at 70 with much less clamour than I expected, apart from a shrill whistle of wind noise, which I might be able to trace and solve.

I can’t really say any more without going into proper road test territory because nothing else of interest happened on the trip home. The little Metro soaked up the 122-mile motorway trip with consumate ease. 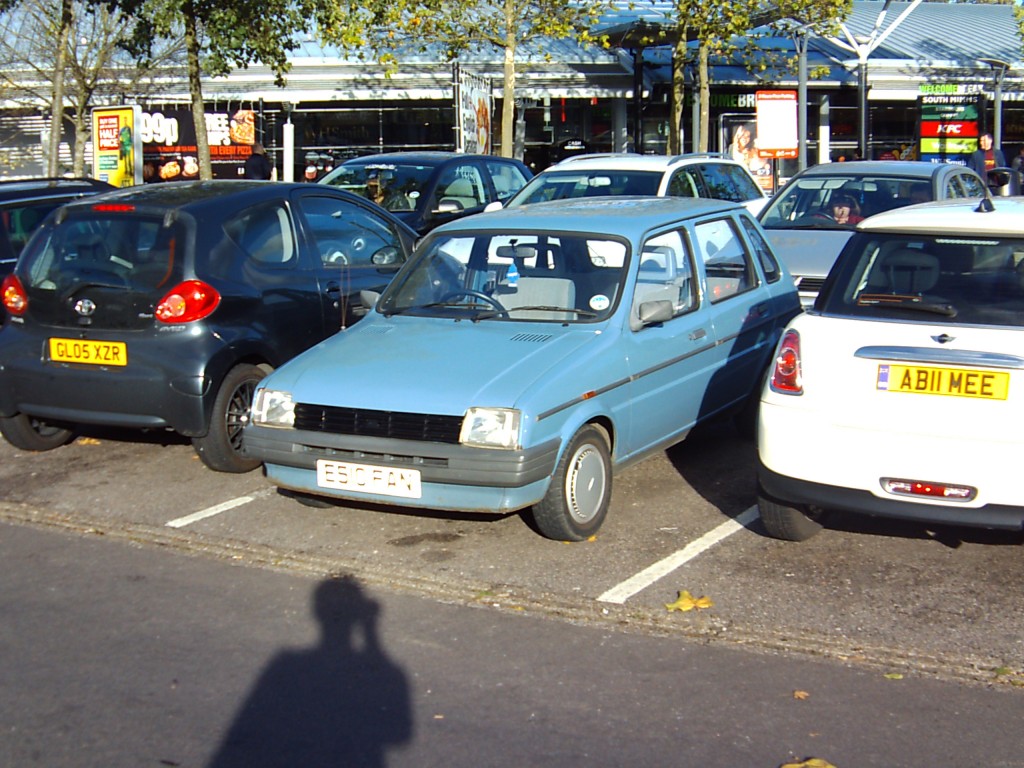 I made a brief stop at the South Mimms services at the top of the M25 to have a late lunch (given that I’d already given into one vice and bought a Metro I thought another wouldn’t do any harm and went for some of Burger King’s finest). 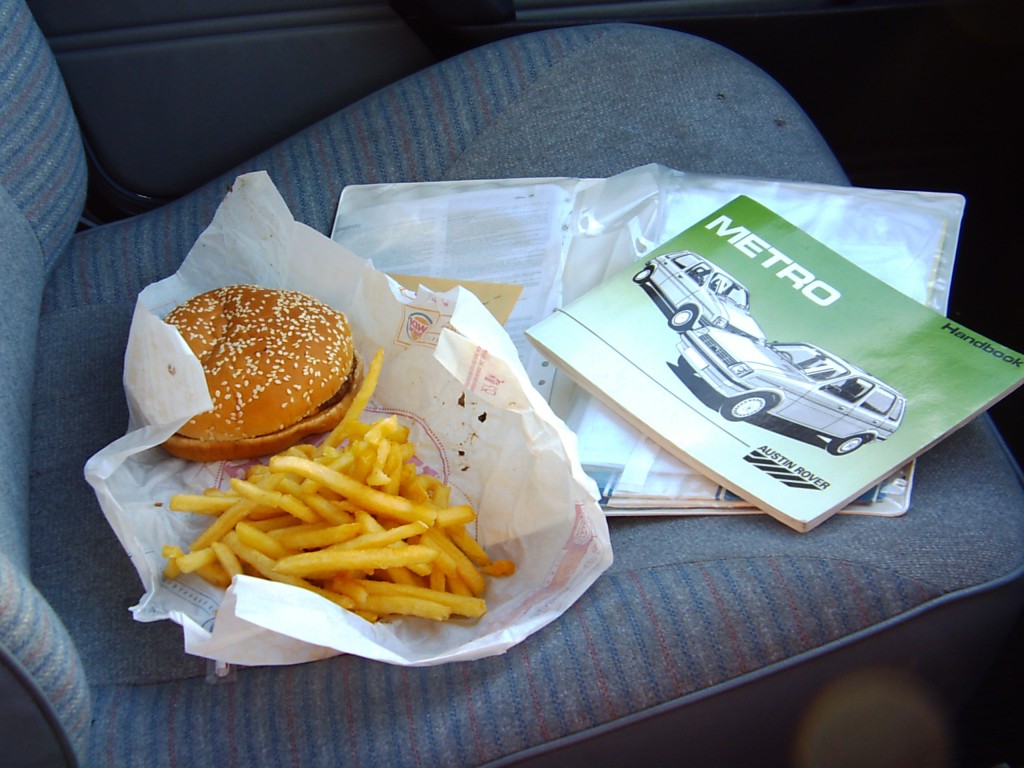 I took this chance to have a read through the handbook, one of my favourite parts of buying a ‘new’ car. It’s encouraging when one of the first pages of the book takes you, in great detail, through the numerous body cavity drain holes that have to be regularly cleared out with a ‘sharp implemen’ to stop the entire structure rusting out.

This was also a chance to try and tune the radio (which had a coathanger for an aerial) into something other than Radio 4 or any one of a number of London local stations, all of which were playing Dubstep and nothing else.

Whilst getting back into the car with my bag of burgery goodness I had my first “Don’t See Many of Those These Days…Used To Have One….” conversations, which since I’d only owned the car about two hours has to be something of a record. It was encouraging that the fellow remembered his Metro fondly, though. 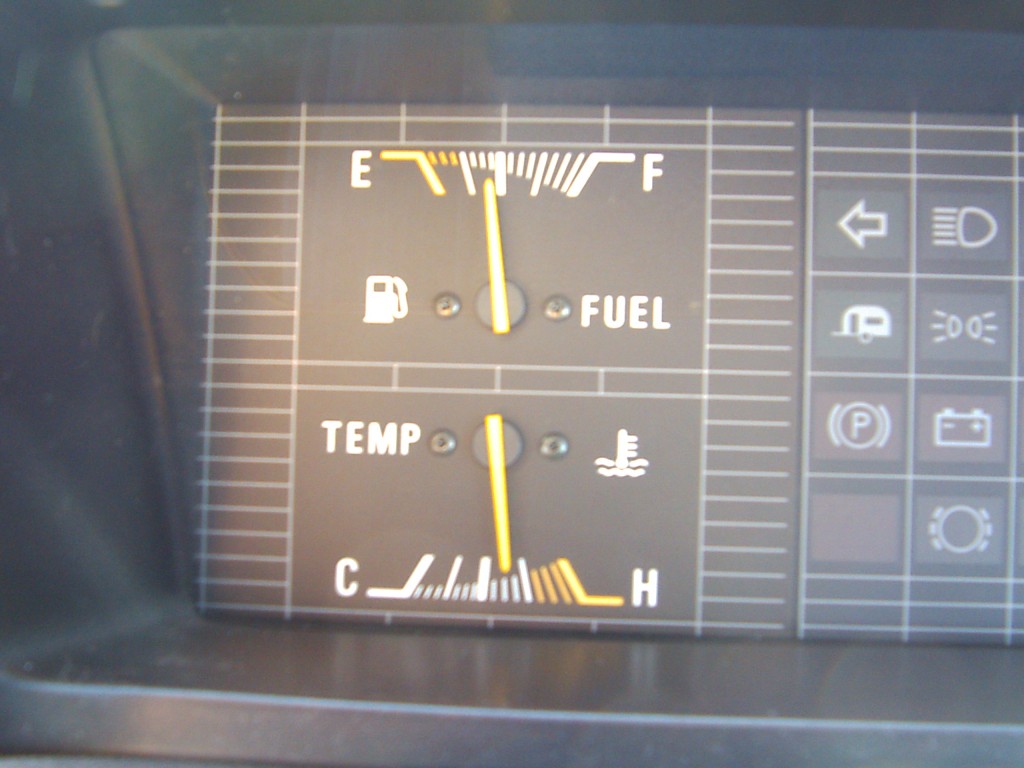 The Metro whirred its way up the A1 into the gathering dusk and it was still going strong when the time came to turn off for Peterborough. It says a lot about the car that I was slightly disappointed that I was going to have to stop driving it soon.

As a final test I made a slight detour via the station to see if I could get the bike in the back, which would save me having to walk down (horror!) some other time to ride it home. It was a good, early test of the Metro’s practicality. I was slightly sceptical but after folding the rear seats down (I suspect for the first time, given how stiff the latches were) the bike went in easily, upright with just the front wheel off. 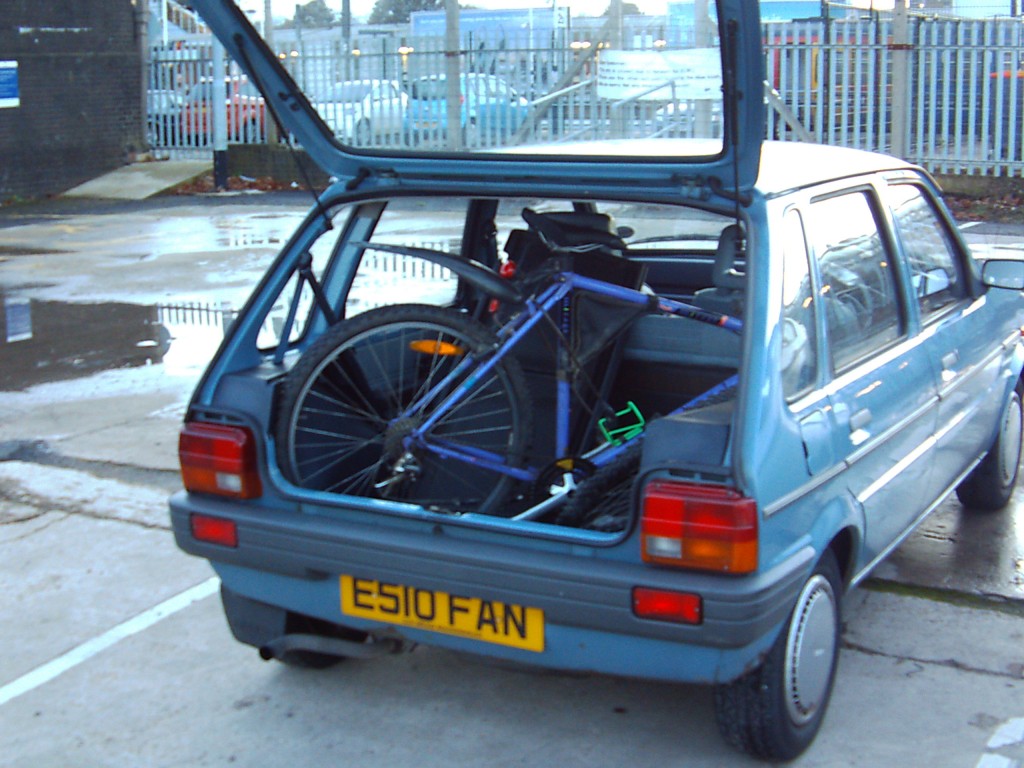 This also revealed one niggling fault on the car. Whilst the infamous Hydragas suspension was still level and true the same could not be said for the other pnuematic support system on the car, the boot gas-struts, which had obviously given up on life after 27 years. Opening the boot just saw it sag gracefully shut again.

Really if that’s the only fault for now then I’m looking forward to getting to know the Metro more. 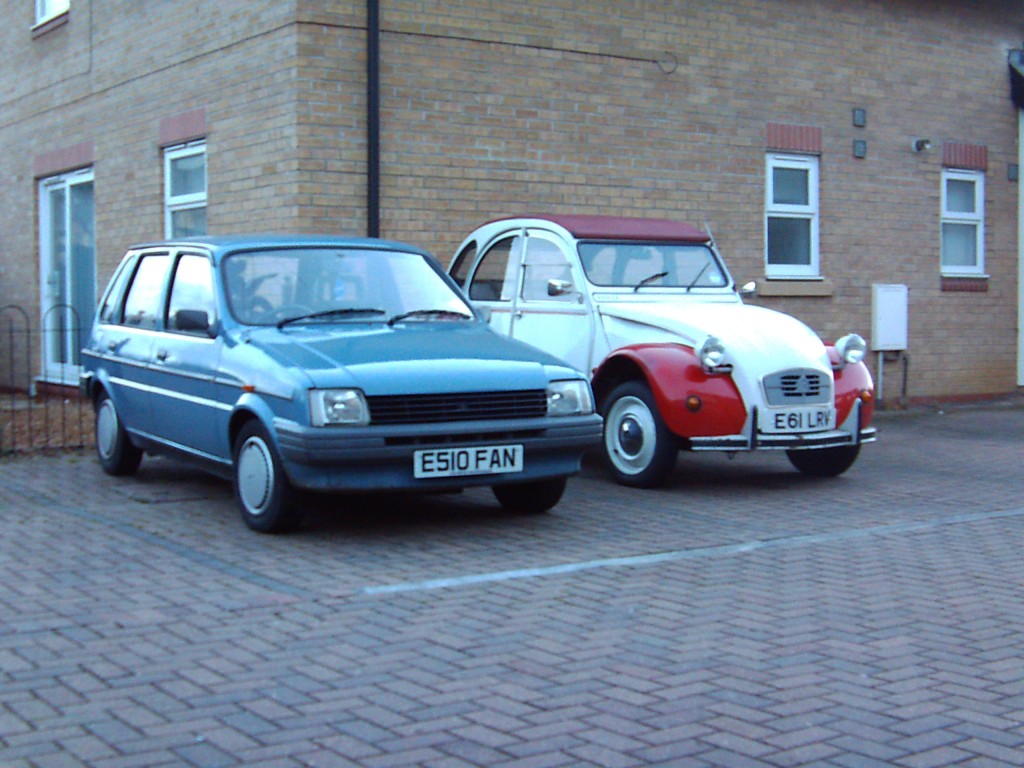 Any other suggestions for E-reg hatchbacks based on very old designs with unusual suspension? I feel I need to get ‘Connect 3’.