Who would have thought that this blog, as it slogs towards its 1st birthday like a Perkins-powered Mk1 Transit climbing a motorway gradient, would be defending an Audi? Audi is probably the antithesis of this blog’s content, with its tedious cookie-cutter design, rather dishonest brand positioning, its habit of letting its buyers spec a 2-litre diesel hatchback with a ‘Sportline’ cosmetic pack and increasingly flaky mechanical quality. There’s nothing different, innovative, interesting exciting or even that capable. The cars are just cynically-branded commercial products to let VW squeeze a few more Euros out of its corporate platforms.

It wasn’t always this way. Although they’d never admit it in public, almost all of VW’s current success comes from Audi (or Auto Union). When VW was about to go bankrupt because it was only building Beetle-based biscuit tins that no one really wanted to buy they bought up Auto Union and used their existing water-cooled engine family and front-wheel drive technology to create the Passat and, much more importantly, the Golf. From that time onwards one of the most distinctive and engineering-led car producers in the world was doomed to become a corporate badge-swapping exercise.

With one exception, which is, of course, the Audi A2. The A2 is generally regarded as a sales disaster that lost Audi a huge amount of money on what was, on the face of it, a family hatchback that looked like a slug  and seemed to sell mainly to old people and lecturers at university engineering departments. 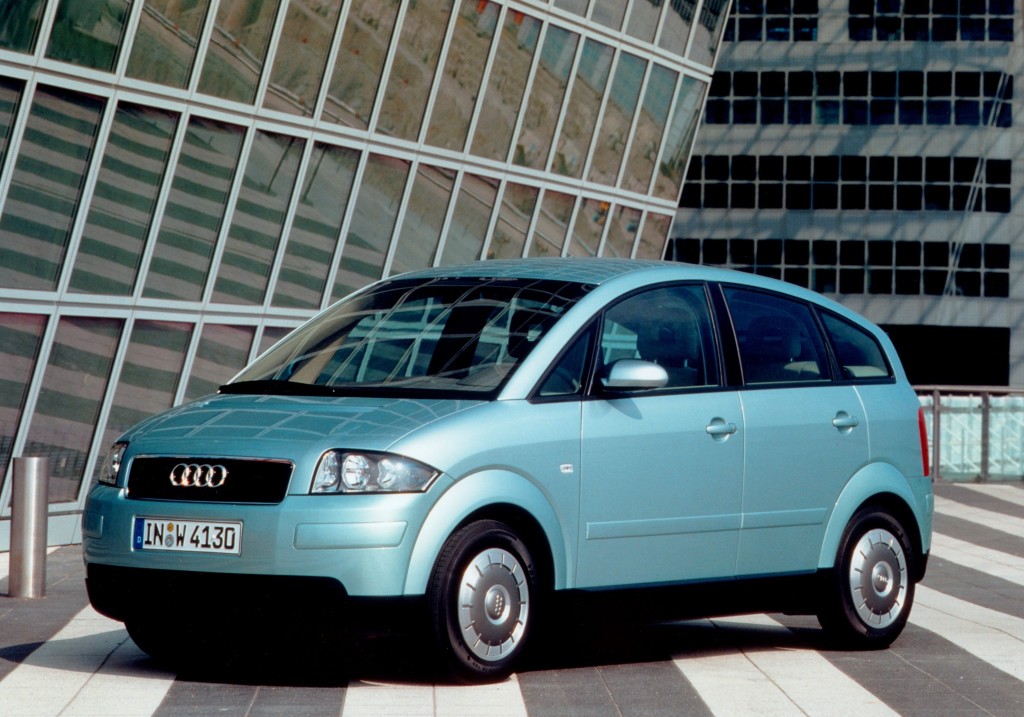 In case you hadn’t guessed yet, I reckon there’s more to the A2 than that. The best way to put the case forward is to go through the familiar three questions:

Short answer- no. To expand on that statement a little, I would say that the A2 was the best pure car design of the 1990s (with the possible exception of the Honda Insight) and could credibly be described as the most innovative car design of the past 30 years.

The A2 was, and is, a wonderful expression of functional design. It was intended to be a highly fuel-efficient car and, like all the best designs, it arose from a functional need rather than simply an intent to fill a gap in the market. The A2’s design brief was to transport four people between Stuttgart and Milan at normal motorway cruising speeds on a single tank of fuel. This was then expanded into a technical exercise by Audi to develop the most fuel-efficient conventional car ever made.

The A2 was designed and built with almost obsessive attention to three things- a low weight, a spacious interior and aerodynamic efficiency. To do this it used an aluminium ‘space frame’ structure with entirely non-structural aluminium body panels.The frame is made from extruded single castings of aluminium laser-welded together (traditional welding adds more metal and thus more weight). The entire structural element of the car could be picked up by two people and the side panel (A-pillar, top rail and D-pillar) weighed only two kilos per side. A base-spec A2 weighed only 890 kilos- about the same as a Rover Mini. 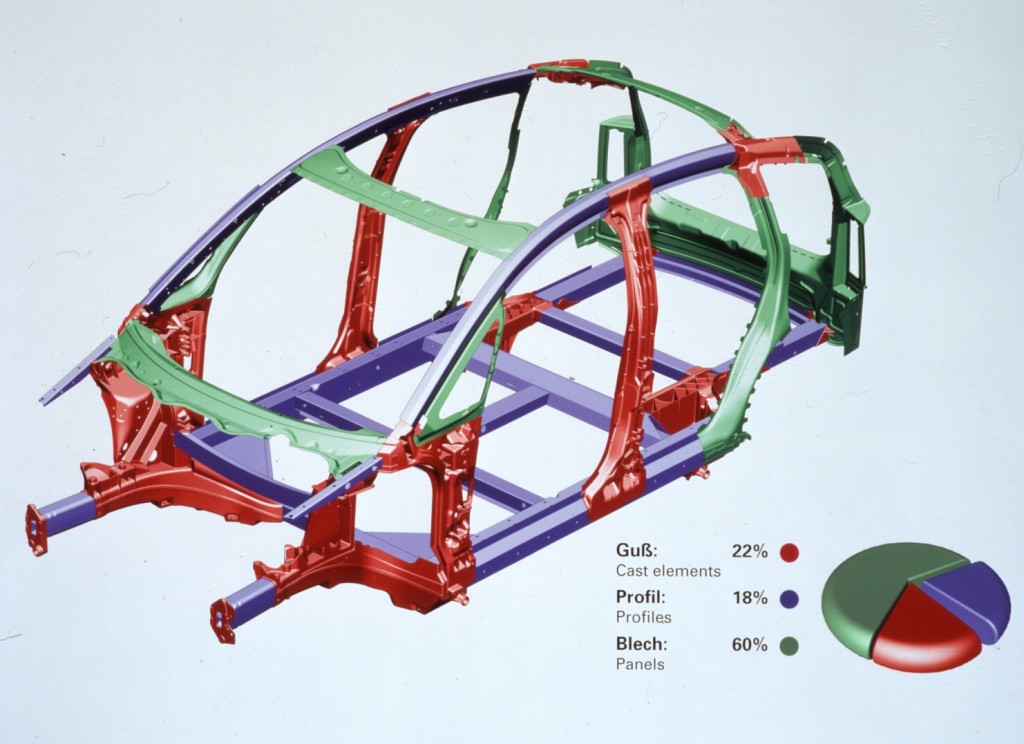 The A2’s ‘distinctive’ looks were derived from its aerodynamics. The side profile is close to the ideal tear-drop shape with a blunt nose, tapering roofline and a Kamm tail. The slab sides and rounded corners that make it look so odd were key to providing it with the world’s lowest drag coefficient for a production car (0.25 Cd). This was also the reasoning behind the A2’s most infamous feature, it’s ‘sealed for life’ engine compartment. By doing away with the usual bonnet and front end design Audi could reap huge gains in aerodynamics. Instead the A2 had the ‘service hatch’ – the blanked ‘grille’ panel between the headlights which flipped down to reveal the fluid reservoirs and the dipstick. In fact the A2’s engine was readily accesible through a lift-off top panel which was screwed down against a rubber seal so it didn’t produce uneccesary drag. 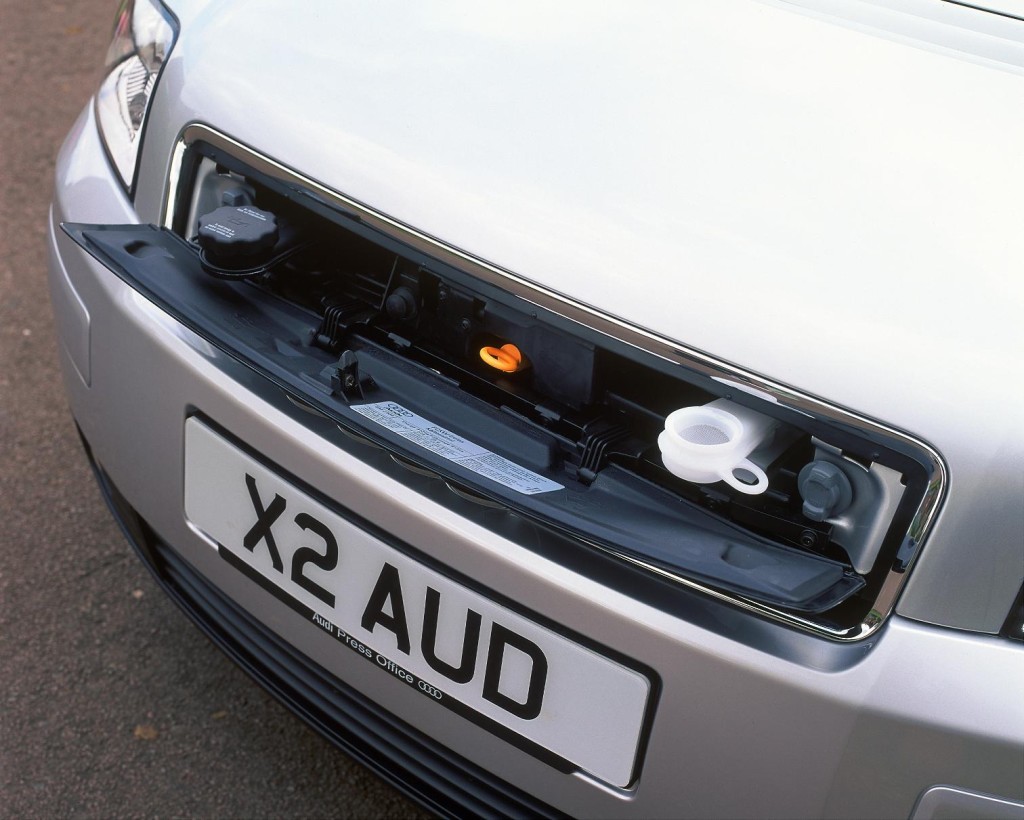 The minimalist structure of the A2 also meant that it yielded an almost unsurpassed amount of interior space for a car of its size (it was about the same length as a contemporary Nissan Micra). The structural platform was built so that a great deal of the car’s parts such as the fuel tank, the battery, the spare wheel and a great deal of the electrics could be placed within the under-floor void leaving the passenger space an almost perfect cube, complete with a flat floor. The A2 had more bootspace than an A3 of the same era. The rear footwells were let into the underfloor void so that there was impressive headroom in the rear despite the tapering roofline. The unused parts of the platform void were formed into storage bins. 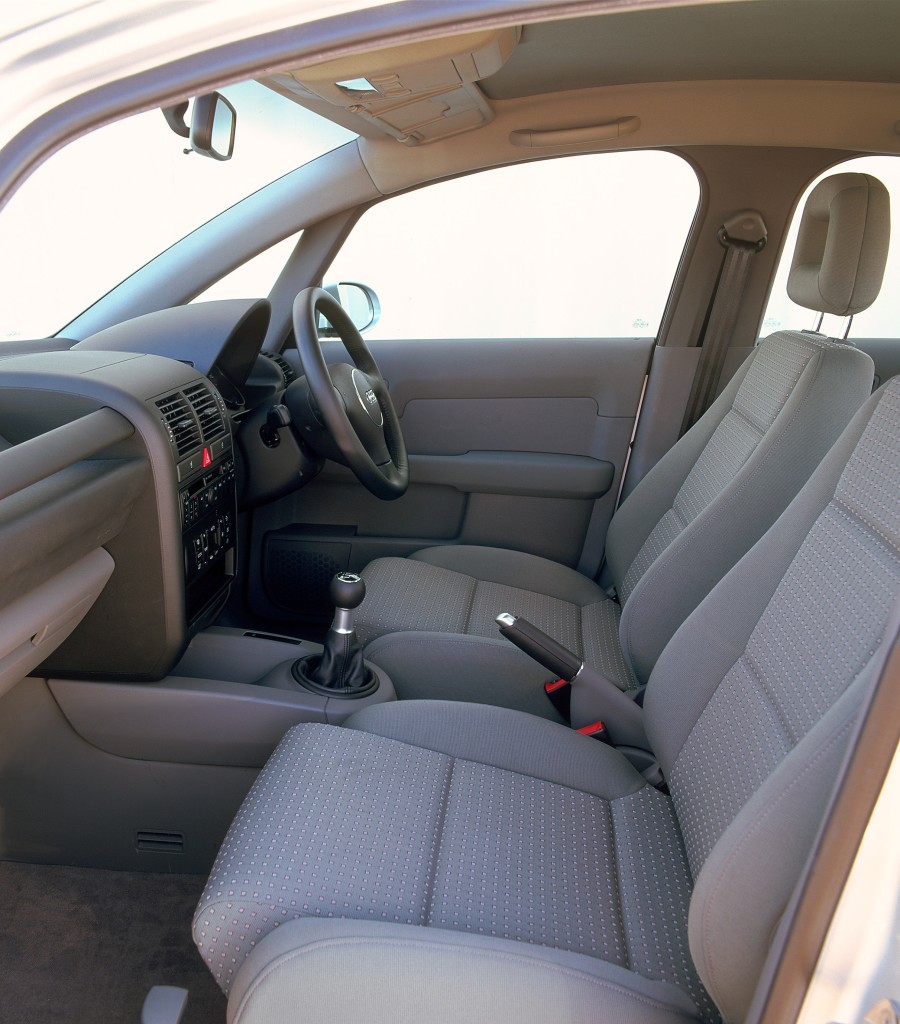 All this function-led design created a car that, while it could never be described as pretty, was certainly timeless. The A2 did have some basic styling, largely inherited from the same minimalist school of thought that produced the original Audi TT. Like that car, I reckon you could launch an A2 now in 2013 and it would still look as fresh now as it did back in 1999.

2) Was The Design Executed Properly?

It’s an Audi, so of course it was. The A2 was dazzingly successful when compared to its brief. By some measures it remains the most fuel-efficient production car ever made and it still holds numerous records for a conventional car without an electric or hybrid drivetrain. The most efficient version, the 1.2 TDI with a 3-cylinder engine in ‘3L’ (which in itself was a cutting-edge design being a turbodiesel engine that weighed less than 100kg in working trim) was the first car to record a fuel consumption of less than 3 litres/100km (or over 94 MPG!) in the German government tests. It also produced CO2 emissions of under 90g/km over a decade before such figures began to be seen again in the motor industry. 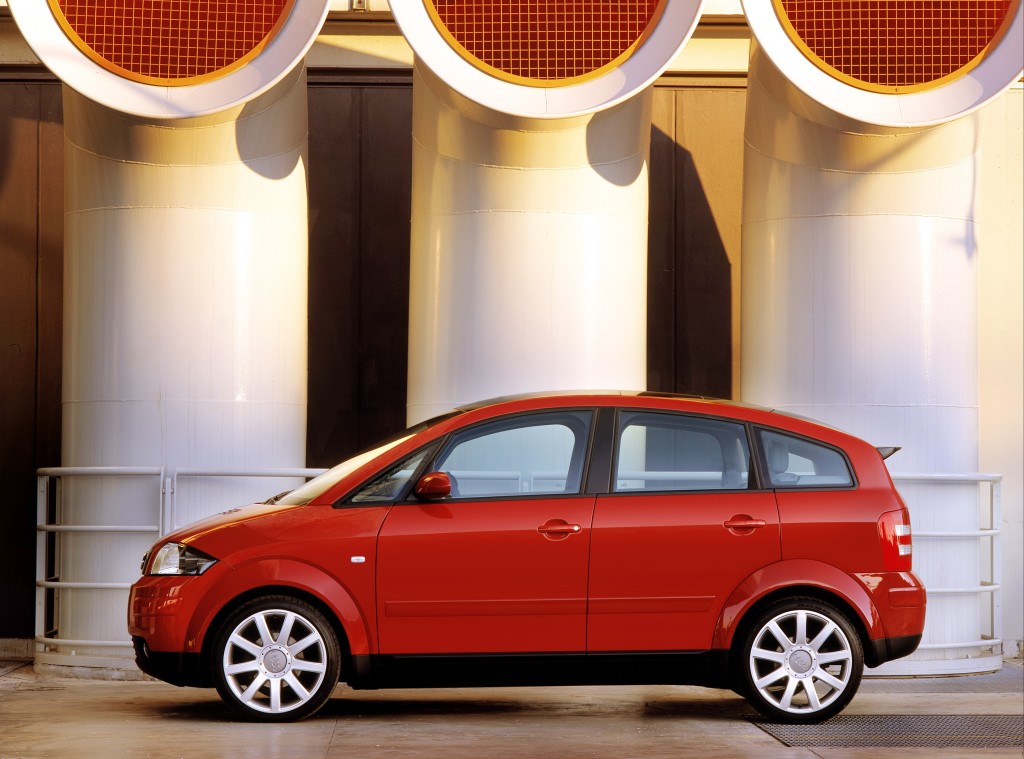 The same model could record cruising fuel consumption figures of 140 MPG in certain conditions and one such car won a fuel economy rally with an average consumption over the entire course of 107 MPG.

Of course the 3L was the headline-grabbing eco model, and carried with it distinctly mediocre performance with a 0-60 time of over 14 seconds and a top speed of barely over 100 MPH. None the less the inherent efficiencies of the design meant that even the more peppy 1.4 and 1.6 petrol engines could reach MPG figures in the high 40s. The two tunes of 1.4 TDI could both return over 60 MPG. 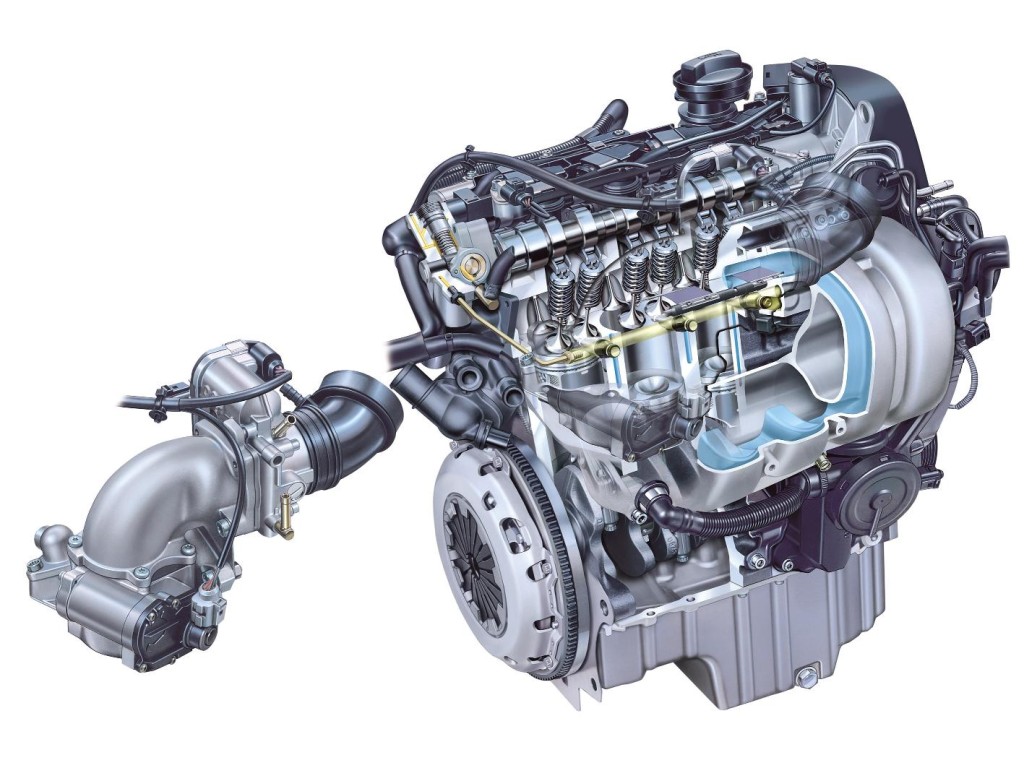 The A2 wasn’t just about miserly running costs, though. It’s extreme lightness meant that it was remarkably nimble and sharp to drive and it benefited hugely from the combined might of Audi and Volkswagen’s knowledge on how to make decent-handling cars. Road testers almost uniformly expressed suprise (sometimes verging onto amazement) about how the car cornered and gripped so well, but this is, of course, a natural benefit of a light car with minimal inertia. 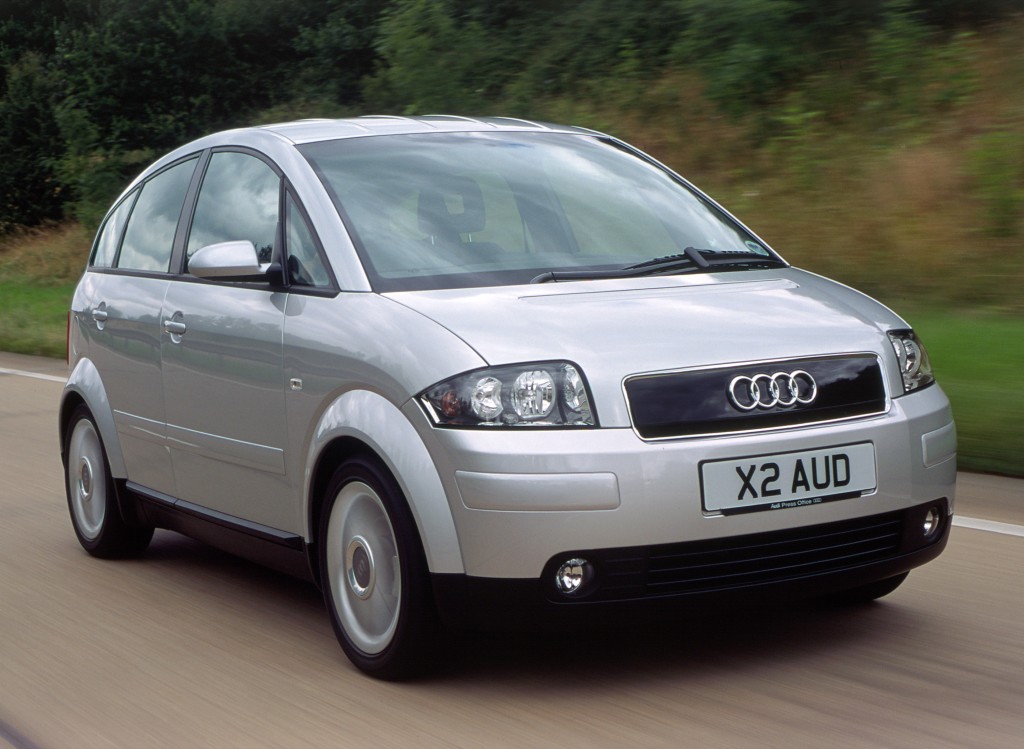 3) Was It The Right Design?

This is where it all starts to go wrong. While the A2 was a superb piece of design taken in isolation, and was a resounding success at meeting its own stated design aims, it was simply a car that no one really wanted. However much people will complain about high fuel costs they generally won’t accept any real changes in their car in order to save a bit of cash. The A2, with its stark appearance and ruthlessly efficient design was too much of an oddball for the mass market, especially when wearing a badge that had been formed into a by-word for safe and conventional executive motoring.

The A2 was also incredibly expensive. It had been designed with little regard to cost, with the development team being told to make a ‘small Audi, not a cheap Audi’. The car’s aluminium construction was hugely expensive to make and it made almost no use of the VW parts bin which meant it had no economy of scale. People who want to save money on fuel don’t generally have the means to buy a quirky but expensive gadget (which is essentially what the A2 was) and the sort of people who could afford an Audi didn’t want a small one. 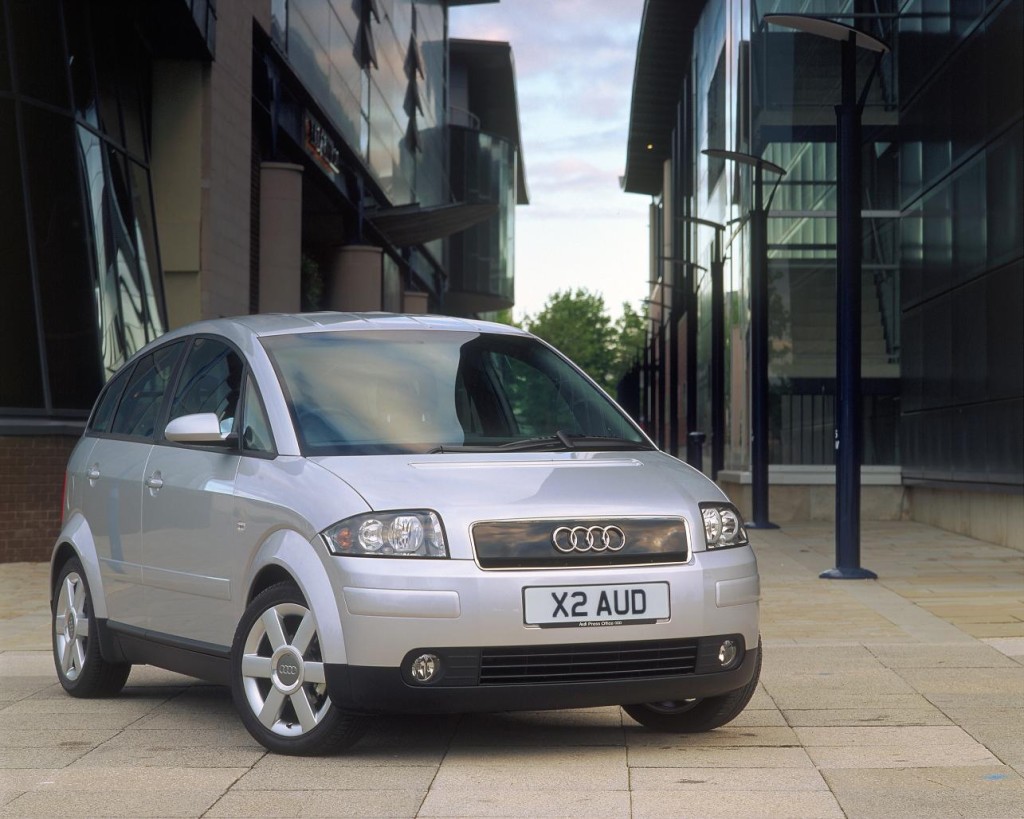 Audi did price the A2 as keenly as it could afford but even then it only made money on the most lavishly-equipped ones and if everyone had bought the most basic, fuel-efficient model (the one that underpinned the A2’s complete raison d’etre) it would have been completely unviable. It soldiered on as a bizarre sort of halo model for Audi’s “Vorsprung Durch Technik” ethos until 2005 when it was axed. The axing of the A2 was in fact the very first thing that Bernd Pischetsrieder (he who doomed the Rover 75 by bad-mouthing the company that built it, in public, during its launch party) did when he became VW CEO.

There we have it. The A2 is a brilliant car, but a pointless one.

There are other things that can be said in its defence. It’s design approach was almost unique in the 1990s and is now even more extraordinary. The style of designing a car for a function rather than a marketing niche is distinctly old fashioned. As such the A2 can make a decent claim to be the spiritual successor to three iconic cars:

– The Mini – With its ingenious packaging, clever construction and entertaining handling that came entirely by accident rather than by a concious decision to make the car ‘sporty’ the A2 embodied much more of the engineering spirit behind the BMC Mini than the BMW MINI does.

– The Citroen 2CV – No car since the 2CV has combined engineering innovation and ruthless simplicity in the name of achieving economy than the A2. I would hesitantly put forward the A2 as an embodiment of the entire ‘proper Citroen’ way of doing things- offering ordinary motorists a technologically superior product and hang the expense.

– The NSU Ro80 – Again, no other German car (especially from NSU’s modern descendants in the VW Group) has combined function, elegance and innovation in such an effective way.

The A2 doesn’t really need to be defended in and of itself. It’s not so much that people thought it was a bad car. It just seems that few people realise quite what an extraordinary car it really was.