It’s been a while since I’ve done one of these, and I’m afraid I’m really covering a lot of ground already well traversed.

My first road test on this blog was of the MGF and my verdict was, unsurprisingly, positive. Now it’s the turn of the MG TF, which isn’t so much the successor to the F but a heavily revised and facelifted version of it. So much of what I wrote about the F still applies that I’m not going to repeat myself, but merely point out what I actually think is different. Besides, there’s a more esoteric matter that I want to cover.

By 2002 the F had been on sale for seven years. It had been well received and was one of Europe’s best selling roadsters (although since that market consisted essentially of the MGF and the MX-5 that isn’t saying too much). In the UK  the F actually bested the Mazda in the charts. Now MG-Rover was out in the cold without BMW’s money and it needed to keep things fresh. In a familiar story, it also needed to cut costs.

To that aim the biggest change was the deletion of the Hydragas  suspension. This had been a key part of the MGF’s appeal since it offered tenacious grip and excellent stability while also allowing a cosseting ride. With the MGF now the only car using Hydragas left in production it wasn’t economical to produce the units and so they were replaced on the TF with coil springs. The body tub was redesigned to improve the torsional stiffness and the 1.8 K-Series engines received more aggressive camshafts. A new nose cone and some different interior trim items completed the ‘transformation’ and the TF would soldier on as Britain’s best-selling sports car until MG-Rover collapsed under the weight of its own history in 2005.

My recent drive of a TF took place in mid January and involved driving from Peterborough to Birmingham and back. A drive in the middle of winter along a motorway to the NEC is not a traditional stomping ground for roadster test drives but it was enough to nail down what had and hadn’t changed.

The first thing to note is the interior. This TF is a 2003 example so it has mercifully been spared the ravages of Project Drive, the cost-cutting exercise implemented in 2004 which essentially ruined the entire MG-Rover range for ever. None the less it’s noticeable that the TF is a cheaper, more basic product than the F I drove last summer. While that had an interior made largely from bits of Rover 200 it did, thanks to its wooden trim and leather sits, beige dials and chunky buttons exude a certain old-school Establishment quality. The TF revamp has got rid of all that and replaced it with bits of (fake) chrome, stainless steel and horrible grey-coloured plastics. It’s more ‘contemporary’ for 2002 but it looks cheap and nasty. Of course sitting in glorious splendour on the dashboard is the electric mirror switch from the Triumph Acclaim (1981). 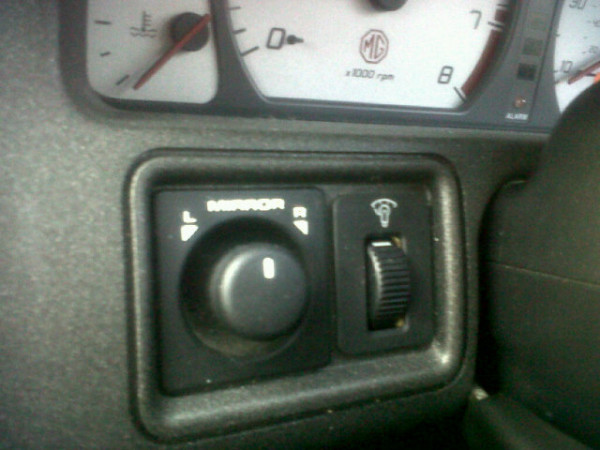 Clambering in on a dark morning the most immediately obvious loss is the red ring light around the ignition barrel which, coupled to the less-than-perfect ergonomics means that you have to have a few stabs at getting the key in. The plastics are nice and scratchable, too, so the area around the keyhole looks like a ploughed field. The other offenders are the heater control switches. If a Little Tykes Cosy Coupe had a heater, this is what the switches would be like- cheap, tacky and vague in operation. 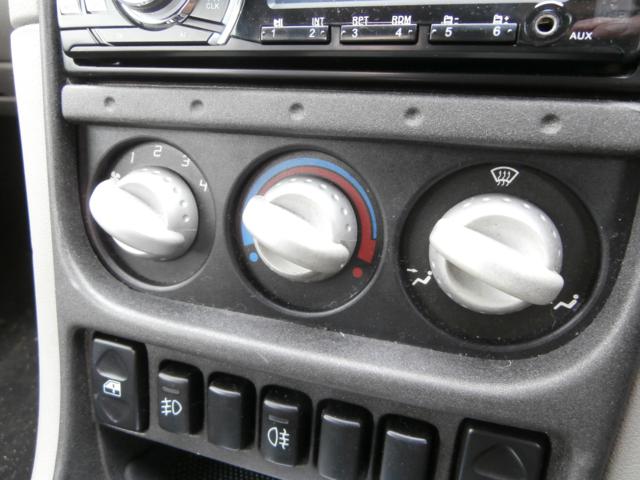 On the road the ride is the most obvious change. It’s a much more conventional sports-car ride and the TF is noticeably stiffer and, in many ways, offers better feedback as to what it’s doing than the F, which gripped like a limpet but didn’t really feel the need to involve the driver in the process. I’m not sure if it’s the coil springs or the stiffer platform which plays the greater role here.

It’s a surprisingly big change because it alters the whole purpose of the car. The MGF had a unique selling point of being a comfortable, cheap and entertaining roadster that was much better mannered and less ‘raw’ than the Mazda MX-5. By switching to coils stiff-as-a-board dynamics the TF puts itself right on the Mazda’s front lawn, so to speak. Deciding between an F and an MX-5 was always a ‘swings and roundabouts’ decision (specifically how much you wanted to get the tail out around the latter) but MX-5 v.  TF is clearer cut because the MX-5 is a better driver’s car in the traditional roadster mould than the MG is.

It’s not just the stiffer ride that makes the TF a less harmonious experience than its predecessor. The real benefit of the Hydragas wasn’t so much its ride but its stability because it prevented the inevitable pitching of a short-wheelbase and wide-track car like the MG. The TF lacks that and, on a less-than-perfectly surfaced part of the M6, it really showed. The TF fidgeted and scuttled over rough tarmac in a way that the F never did.

A lot of the MGF’s good points are still there, though. The essential layout is the same so the high grip levels are there thanks to the rear-mounted engine and good weight distribution. The K-Series engine is a gem that responds well whether being driven gently or thrashed, although it seems to enjoy the latter more, particularly due this particular TF’s very fierce clutch.

Once I’d stopped mentally checking off the list of things that MG-Rover had managed to ruin about the F and began concentrated on the TF as a car in its own right I actually really enjoyed it. I enjoyed it so much that, with business at the NEC concluded I added over an hour to my return journey to take the MG TF ‘home’ and swing by the MG Motor plant at Longbridge. 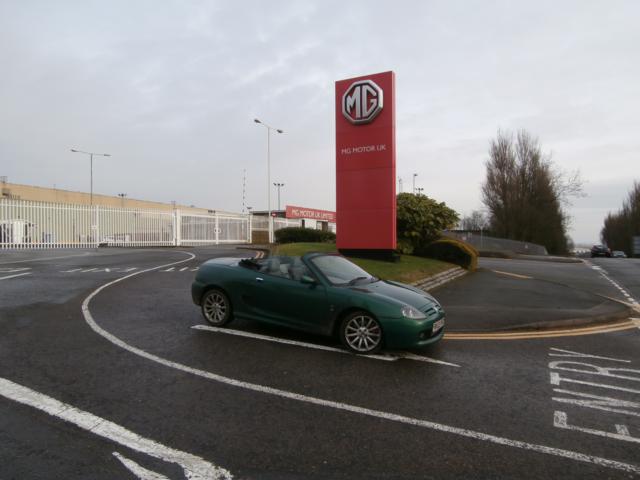 This is always a journey filled with a certain amount of pathos these days as the current MG operation only occupies a part of what was once the largest single-site car plant in the world. To get to the famous ‘Q-Gate’ (most familiar from all those news clips from the ‘Seventies of men in snorkel parkas and extravagant moustaches standing around braziers) you have to drive past several acres of wasteland, bare scrubby concrete, boarded up electrical substations and derelict brick work sheds behind lines of razor –wire topped security fencing. Once I reached Q-Gate the immediate impression was that the site was deserted. Behind the fence was a small line of new MG6 Magnettes. Apart from some limp MG, SAIC and Union Flags stirring in a frigid breeze there was no movement. No noise, nothing. On that particular Saturday the home of one of the most famous brands in global motorsport was utterly deserted. There wasn’t even anyone to object to me parking the TF on the double-yellow lines under the MG totem sign and taking a couple of pictures. I thought about sneaking onto the brick display podium outside the gates but thought better of it due to the TF’s lack of under-chin ground clearance more than anything else.

I cranked the K-Series into action and drive back towards the M40. I’m a great follower of the opinion that to drive a convertible car with the hood up is to have all the disadvantages and none of the pleasure so even though the radio was warning of ‘chaos on the roads’ and the temperature was heading steadily south of zero I just, cranked up the heater (which is excellent, by the way), adjusted the air vents so both my hands were in the path of some warm air and hunkered down in the seat.

It was as I was passing Kettering on the A14 (not as romantic as the Road to Damascus, but it’ll do), that I managed to think my way to why I had so much to criticise about the TF and yet why I liked it so much. The reason is that in cars of that sort the quality of the interior plastics and the technical sophistication of the suspension really don’t matter. That never stopped the MG roadsters of old selling very well and garnering a huge following, and the TF follows in their footsteps brilliantly. It has that same elemental appeal that makes you press on through a freezing January evening with the hood down and the radio up because it’s a fun experience. It flatters you and makes you feel intrepid, like the pilot of a Sopwith Camel boring through a star-strewn sky over Flanders or something. Its simplicity and lack of sophistication is, in many ways, its appeal. Yes, it’s not a ‘quality’ product and however much the various owners of MG wish it, it’s not going to have real value as a premium one, either. What the TF does have is charm. 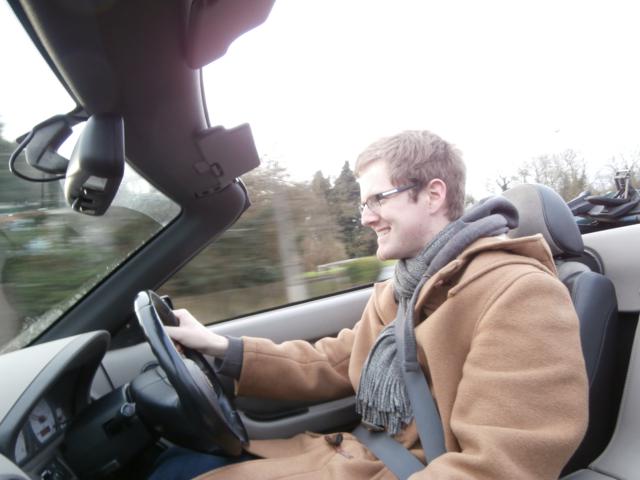 That’s the sort of thing that the people back in Longbridge are going to have to try and build into their products, and not in the slightly less-than-intentional way that the TF does. The Mazda MX-5 has the same sort of basic appeal and fun factor but that was designed in from the very start and it is a thoroughly well-engineered car because of it. There’s nothing wrong with MG making saloons and hatchbacks (it has just as much historical cred for making them as it does for making roadsters) but the brand’s ‘soul’ will always be a cheap, basic roadster being driven through an empty English countryside with the hood down when really it would be better to have it up because the driver is enjoying himself too much.