It’s strange the effect that time and fate can have on a car’s reputation. I happen to believe that a few decades can absolve a car of pretty much any failing simply because by the time a car is 20 years old no one is going to be buying it with the same expectations as they would if it was new. Of course the manufacturer’s don’t want to wait that long and spend many millions of pounds trying to craft their products’ reputation before it has even hit the showroom.

Clever marketing can do wonders for the perception of a car (think ‘Vorsprung Durch Technik’) but one of the most effective ways of rep-building is to combine marketing and the product itself into a ‘halo model’. This is a special version of the standard model which by offering much more performance (the usual choice) or luxury, places itself in a whole new market and creates lots of favourable press reviews. All being well this effect will trickle down to the even the lowliest models in the range and the car’s reputation as a whole will be given a nice boost.

In terms of classic cars this can have one of three effects, and it’s those that I’d like to talk about in this blog. Let’s start with the obvious one:

This is where the Halo Effect has worked so well that even 20 or 30 years after the car was on sale it’s desirability is almost entirely down to the halo models.

The best example of this I can think of is the humble Vauxhall Chevette. 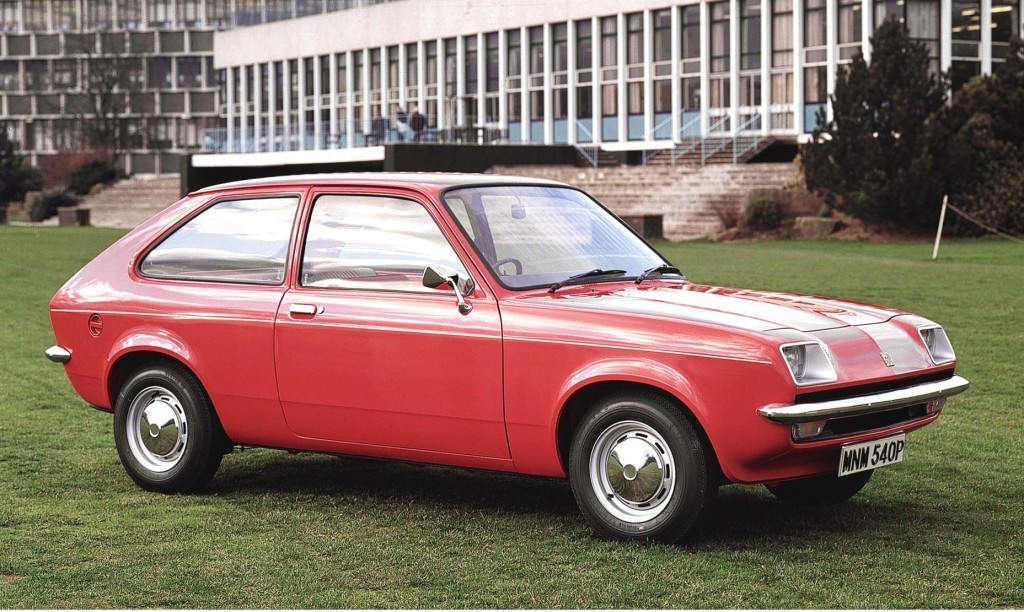 In standard form it was, well, very standard. It was a neatly-styled, rear-wheel drive variant of GM’s global T-car platform that was only noteable by being the first ‘British’ supermini (i.e. a small car with a hatchback) and for being the first product of the Vauxhall works at Ellesmere Port. Apart from that it had nothing particular to recommend it and nothing particularly wrong with it, either.

None the less the surviving Chevettes carry a definite ‘cred’ these days far beyond what you’d expect from any other mass-produced rot-box from the ‘Seventies. That can be laid squarely at the door of the Chevette’s HS and HSR versions.

These weren’t true halo models because Vauxhall only made them as homologation specials to allow the Chevette to go rallying. None the less the result was, I think, one the best looking cars of any type of all time and plenty of other people agrees. The Chevette HS had a 2.3 slant-four wedged under its droop-snoot and won plenty of fans because of its rather lairy and tail-happy nature. 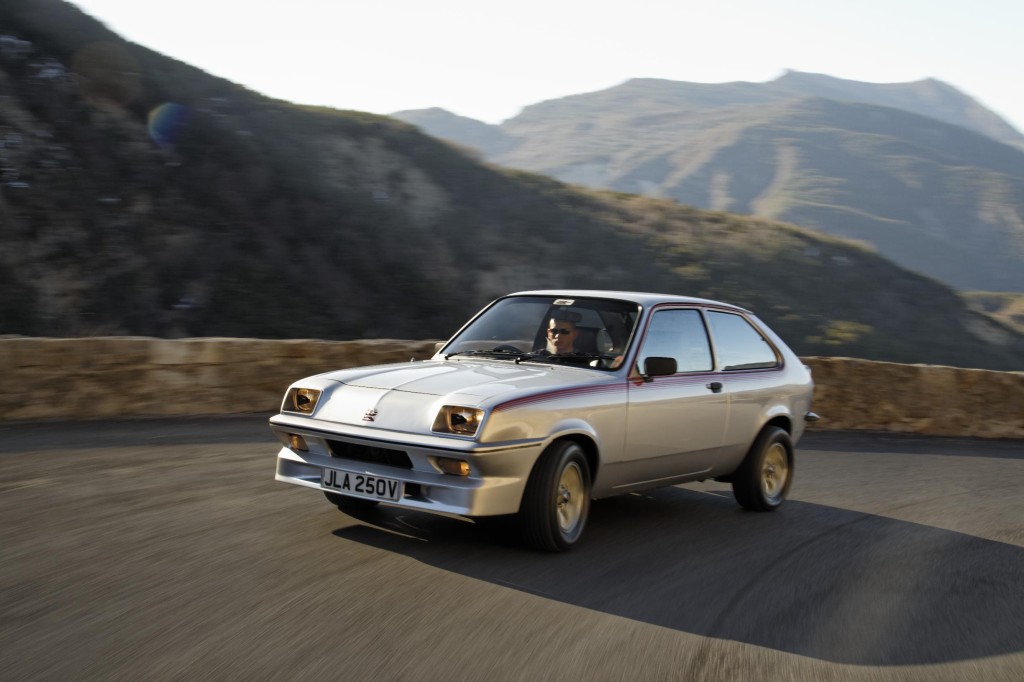 Although only 800 HS and HSR models were built (out of over 400,000 Chevettes) the Halo Effect worked so well that any of the hatchback Chevettes, even a lowly 1.3 L, carry a certain desirability and status in the classic car world. The downside of this is that most of them have had to suffer the indignity of being turned into terrible HS replicas done on the cheap and with wildly inappropriate engines.

Exactly the same applies to another distinctly middling British rear-wheel drive hatchback of the period, the Chrysler Sunbeam. This was Chrysler’s panic reaction to the supermini trend and was made by chopping a few inches out of a Hillman Avenger. It didn’t even have a proper bootlid because that would take time and money- it just had a hinged glass panel. 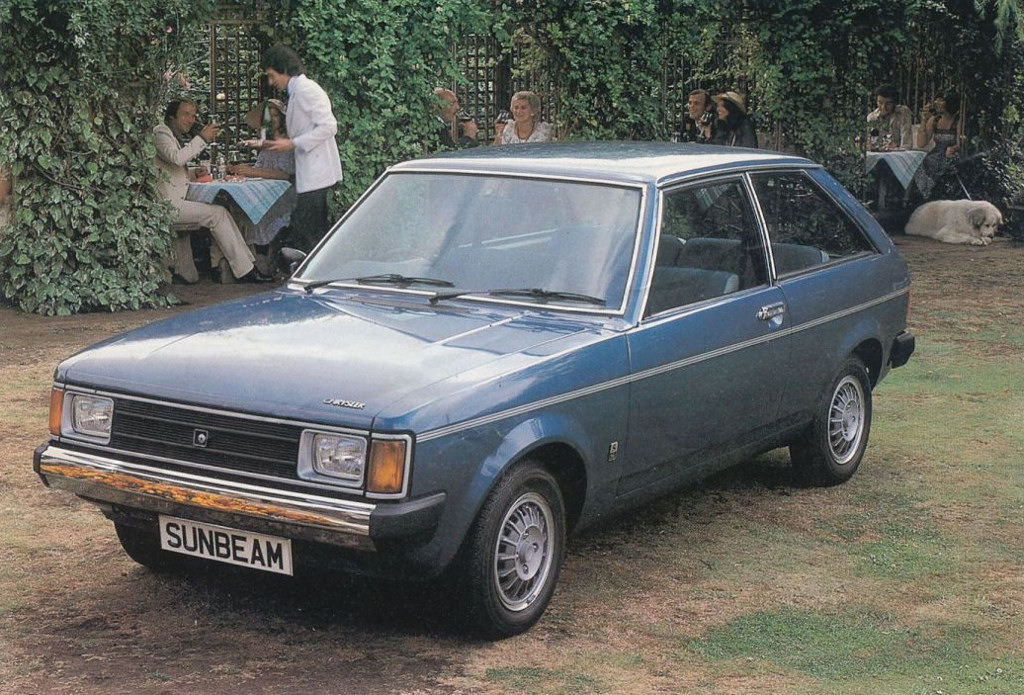 Like the Chevette the Sunbeam’s rear-drive layout encouraged its builders to take it rallying and they beat a path to the door of Lotus. The Nutters of Norfolk shoehorned their Twin Cam engine into the otherwise unremarkable Linwood shopping trolley to create the Talbot Lotus Sunbeam which is still found in competition series. The very few surviving standard Sunbeams still manage to carry a slight whiff of desirability (or, at least, credibility) because as dull and as asthmatic as they may be, they still formed the basis for what it regarded as one of the best rally cars of all time. 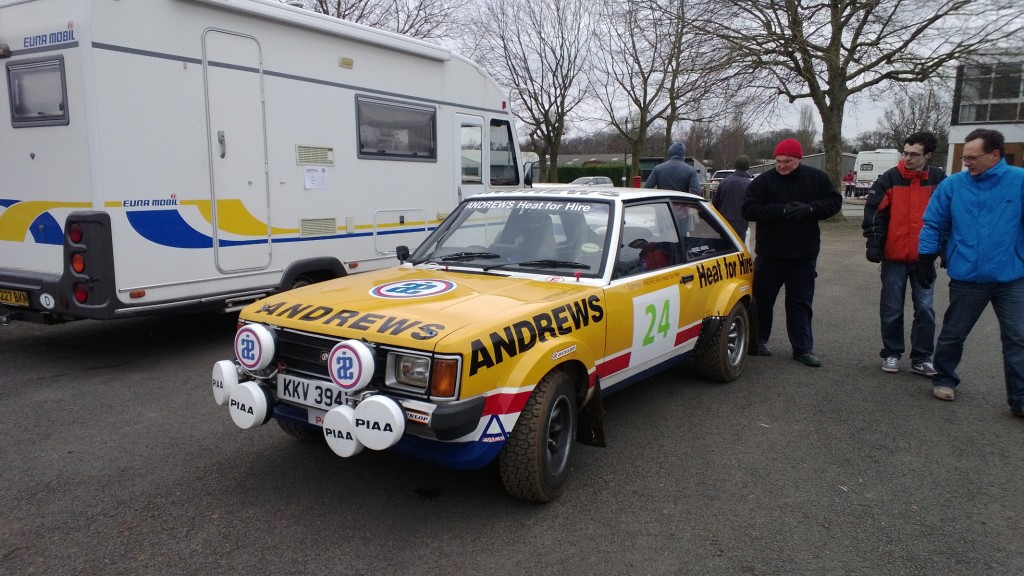 Honourable mention should also be made of the BMW E30 which is often touted as one of the best ‘driver’s cars’ of all time on the back of the M3 performance version. This overlooks the fact that the E30 3-Series was also available in some distinctly basic and lethargic versions at the bottom end of its range that could be out-run and out-specced by a Rover SD3. This doesn’t stop people paying far more for a rubbish old BMW 316 than any logic would dictate.

I was also going to mention almost any old Ford here, but looking into the Ford ‘scene’ a bit it seems that Fords of any sort instantaneously become valuable classics as soon as they turn 20 years old, which has nothing to do with the presence of any halo model in the range (Note to Self: Explore ‘The Essex Effect’ in more detail in the future)

This is where the halo effect didn’t really work, or at least has proved not to work in the long term. Here the halo model itself is very desirable but the lesser cars carry none of their specced-up siblings desirability or value. 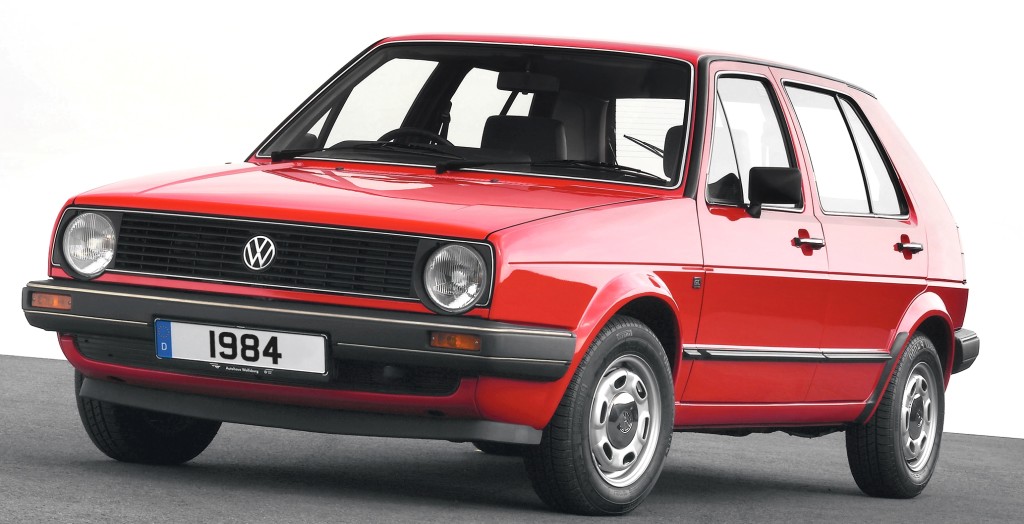 This was entirely down to the GTI which gave the ‘people’s car’ a dash of upmarket yuppie appeal that allowed it to become the cultural icon that it remains today. While it allowed Volkswagen to market itself as a brand much higher in prestige than it really had any right to be the effect has worn off in the long term.

Mk1 and Mk2 GTIs are worth increasingly ridiculous amounts of money. Meanwhile the standard 1300 and 1600 models can be bought for a three-figure sum that would just about buy you a pile of rusty parts in the vague shape of a car with a GTI badge clinging on for dear life to the remains of the bootlid. These cars still have the same qualities that made people by VWs in the first place- sound design, faultless engineering, good build quality, ease of driving- but none of the desirability.

Another contender in the ‘Eighties hot hatch market has suffered the same fate but to a more extreme degree. The MG Maestro 2.0 was (as the BL marketing people never let anyone forget for an instant) slightly faster than the Golf GTI and was praised for its straight-line performance and ‘entertaining’ (i.e. rather unsettled) handling. The turbocharged version is even accepted by dedicated Leyland-bashers as a rather desirable road-weapon, although some of this is down to a slight ‘kitsch ‘Eighties Irony effect’ rather than the halo. None the less a Maestro Turbo in top condition is worth £3000. The common-or-garden Austin versions of the Maestro are lucky to command a tenth of that. Just as the standard Golf has all the same qualities as the GTI except its speed, the  performance Maestro can be seen as having all the bad points of the standard model (odd looks, iffy build quality, temperamental electrics, a tendency for the body panels to fizz in the rain) with only outright performance showing any improvement. Yet it’s worth 10 times as much. The perfect halo model! 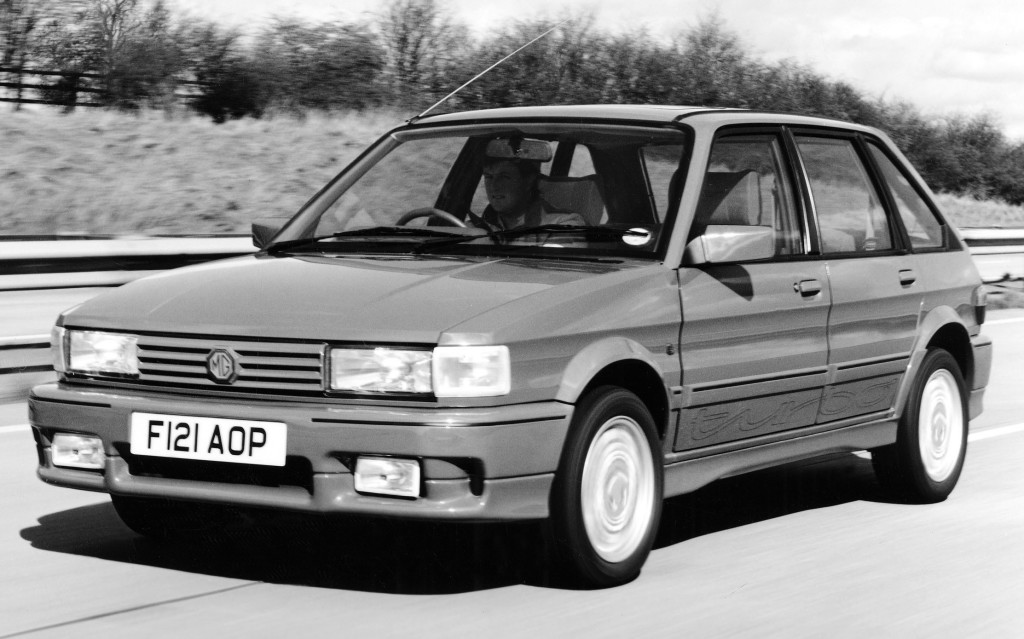 This is where the image of the standard car was so woeful that the halo model was dragged down by it, even if it was quite good. The result today is that they are seen as no better than any other version of the same car, with values to match.

Take, for example, the ‘hot hatch’ version of the Austin Allegro 3, the infamous Equipe. 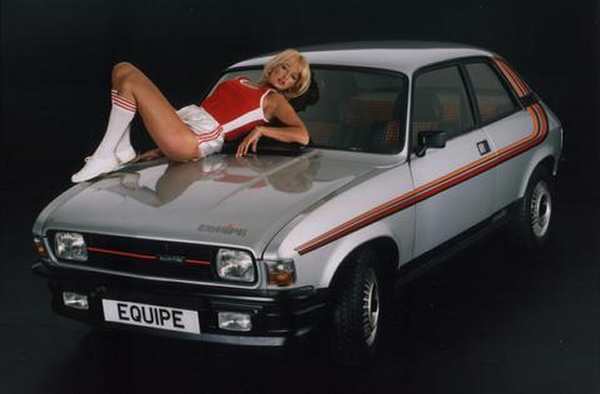 As a small performance car it wasn’t too bad- it had over 90 horsepower, a 5-speed gearbox, a tartan seat pattern, orange and red side stripes and natty turbine-effect alloy wheels. On paper and in performance terms it was a match for the omni-desirable Golf GTI.

Of course, it could never be. The Equipe still had the same looks as the rest of the Allegro range and combined with the silver and orange colour scheme this made it look like a helium balloon left over from a party that had begun to go flat. The Allegro’s reputation in its final years was so rock-bottom that no one with any sense was going to buy a performance version to enhance their image when they could buy…almost anything else. 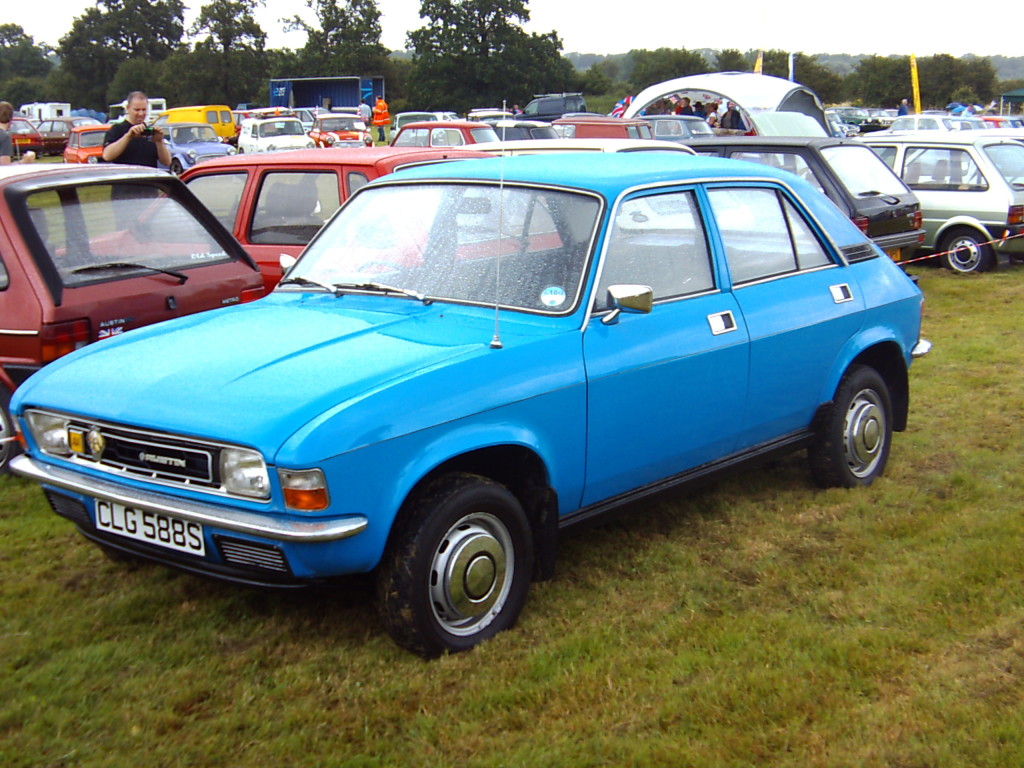 The result is that the Equipe is now only desirable to people who like Allegros of any sort. Leyland’s podgy company-wrecker has actually begun to gather a strange sort of desirability in recent years but that’s mainly a hipster-ish ironic thing and the Equipe is no more or less desirable in general than any other Allegro variant.

A (dis)honourable mention also goes to the high-performance versions of the Vauxhall Viva which, unlike their Ford equivalents or Vauxhall’s later efforts, have had absolutely no positive effect on pretty much anything. Same goes for any ‘Eighties Citroen GTi model. Finally, there’s the most extreme halo model of all, the MG Metro 6R4. It doesn’t really count because the 6R4 is really a barely-controllable explosion on wheels that happens to look a bit like a Metro, but even that didn’t manage to improve the standard Metro’s image one iota. 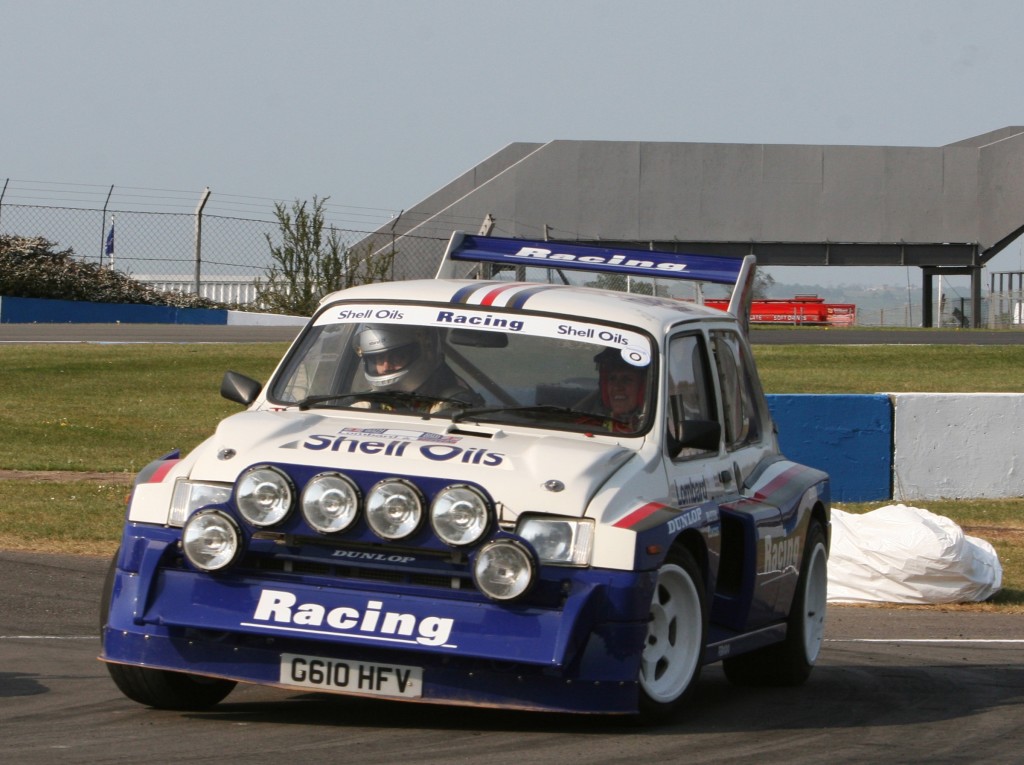 The lesson seems to be that if your car uses nitrogen as its springing medium, don’t try and make a performance version because however good it is people won’t take it seriously. More fool on them, I say.