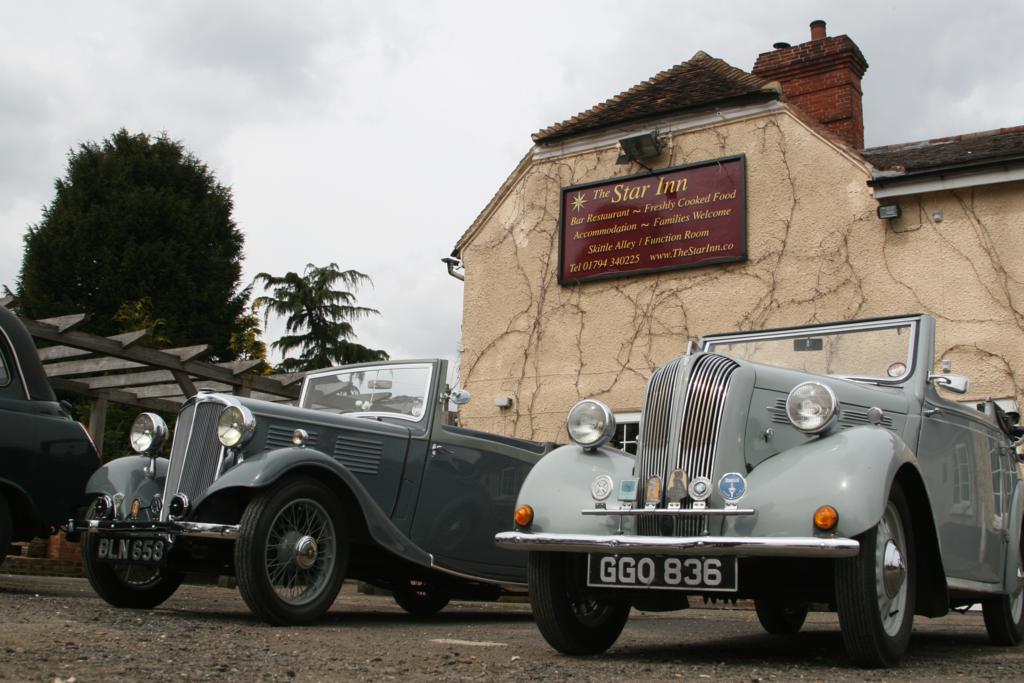 How can it be Drive It Day 2013 already? It feels that the show season has barely got going and before I know it it will be the Bromley Pageant of Motoring and I’ll be complaining that that’s pretty much it for the year and that I haven’t done enough.

Fortunately Drive It Day exists, which all but legally requires people to get out and about in old cars. If you’re reading this blog you are probably at least aware of it. Organised under the Federation of British Historic Vehicle Clubs (the UK classic car movement’s Benevolent Overlords) Drive It Day encourages owners of classic vehicles to use them. As someone who uses his older cars on a near daily basis I’ve always found the idea of dedicated day to this sort of thing a rather alien concept but it works very well at encouraging people of the chamois-and-polish persuasion to actually use their cars on the road (maybe even in the rain!) and show the general public that the classic car movement isn’t a tiny two-bit hobby enjoyed by only a few nerdish weirdos in MGBs, but is in fact a huge multi-million pound hobby enjoyed by many thousands of nerdish weirdos in MGBs and Morris Minors.

For the past three years my regular haunt on Drive It Day has been the Standard Motor Club‘s road run through the New Forest (a bit of Hampshire that is neither new, nor a forest). Father Balloon_Fish owns a 1948 Standard Twelve drophead which has a rather delightful combination of tinworm, woodworm and a hood that is no longer weatherproof with a mechanical ‘heart of gold’ that somehow manages to run like the proverbial Alpine timepiece even 65 years after it rattled its way off a production line in Coventry. Only half a dozen or so Twelve dropheads are left in the UK so it always receives a warm welcome at the SMC’s road run. It’s also old enough to be genuinely in the spirit of Drive It Day (I feel driving a 1988 Citroen that I use most days anyway would be cheating) but for a car designed in the ‘Thirties it’s remarkably easy to drive and is well up to a gentle 40-mile wander around the countryside. 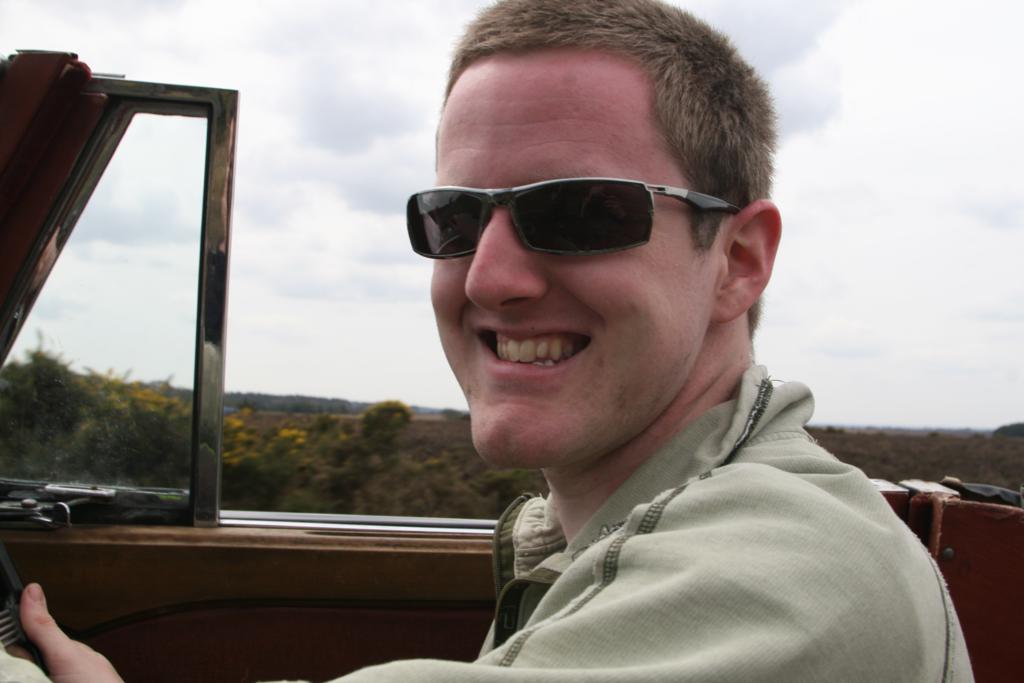 Last year we (meaning myself and a chum who I regularly rope in to navigate) were forced to park up in a windswept layby in a bleak moor because a combination of rain, wind and cold overwhelmed both the Standard’s threadbare weather protection and its dynamo charging system. Unable to run both windscreen wipers, the heater and the headlamps at the same time we had no choice but to abort and wait for the tempest to pass while we plugged the tears and gaps in the hood with tissues and AtoZ atlases of Portsmouth (circa 1984).

The weather gods were smiling on Drive It Day 2013 and I was able to drive to the starting point (a pub in the Test Valley) with the hood down (not that it really makes much difference) and the windscreen cranked open. Although the event is organised by the Standard Motor Club and always attracts a good number of old Standards and their Triumph counterparts, the majority of the cars on the run (usually 30+ cars) are of all sorts. As you’d expect the emphasis is very much on British classics- MGs, Triumphs, Austins, Minis, Morris Minors etc. but there are usually some wonderful oddballs or rarities as well.

This year the less-than-obvious entrants included a Porsche Speedster, an Allard, a Plymouth Valiant .Signet, a Triumph Renown, a pair of Jensen-Healeys and a pre-war Salmson. This was a maker I have never heard of before. Apparently they were the British offshoot of the French Salmson engineering firm to build aero-engines for the British Empire market which then began building its own, independently designed cars in London. Car production ceased in WW2, the French parent company was absorbed into Renault and British Salmson morphed into a builder of printing machinery. 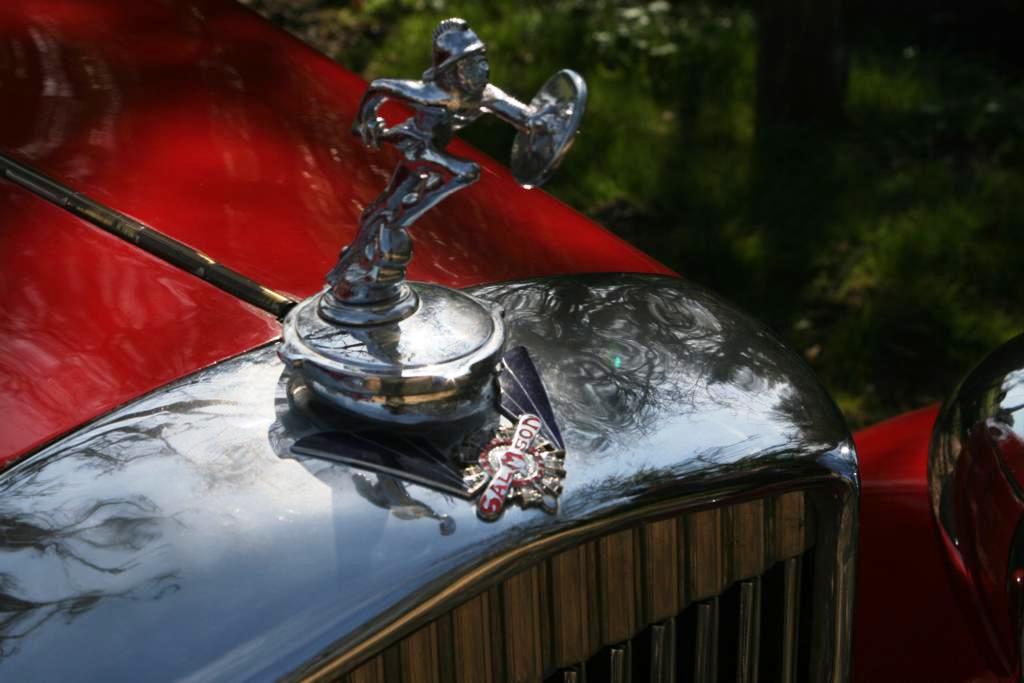 As the time for the off approached, a bombshell was dropped in our direction as one of the organisers told us that since we had (and I quote) “the best car here” we should be the first to set off and lead the pack. So that meant that 30-odd cars would be following us and our pace-note-reading skills. No pressure!

We decided that the most valiant thing to do would be to set off and immediately open up a huge lead and get out of sight of everyone else so they couldn’t follow us. With a chorus of straight-cut gear whine and the flatulent sound of a side-valve engine breathing through a slightly leaky exhaust we ‘powered’ down the Test Valley. Previous road runs have actually shown that the Standard Twelve drophead is something of a Bugatti Veyron of the late ‘Forties. I don’t know if it’s because everyone else takes the opportunity to have a genteel drive in the countryside, if the Twelve is in especially good and ‘loose’ mechanical condition or if I just drive it like a loon, but it will happily clip along at 50mph on a good road with power to spare and in other years we’ve had no trouble keeping up with, theoretically, much quicker cars. 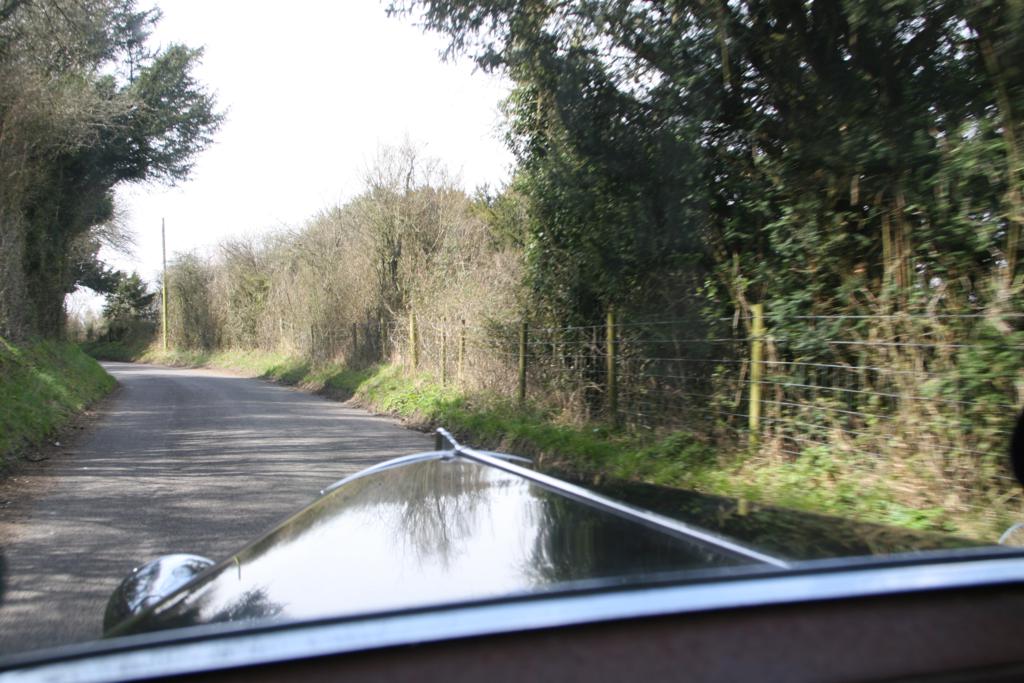 The first obstacle was Dean Hill, a fearsome escarpment with a single-track road draped across it along the perimeter fence of the now-disused RNAD Dean Hill, a naval ordnance depot that stored most of the Navy’s shells during WW2 and was used to store nuclear warheads overnight on their journey from Aldermaston to Plymouth or Faslane. The hill was a regular hillclimb venue in the ‘Twenties and I can see why. The Standard tackled it gamely, happily stretching to the top of its rev range (probably a strenuous 3000rpm or so!) in 2nd but not having quite enough horses spare to pull 3rd gear.

After a few miles on undeniably pretty but rather twisty country roads (not the natural home of a car with a worn steering box, skinny cross-plies and a transverse leaf-spring front axle) we puttered out on to the edge of the New Forest, which is distinguised by a singular lack of trees. Instead there is hundreds of square miles of windswept gorse heathland inhabited by native ponies who are splendidly apathetic to the presence of cars on ‘their’ roads. If a pony wants to stand in the middle of the road to get at a particularly tasty bit of grass it will and nothing will make it move. This adds a certain frisson of excitment to any drive through the area. The Standard was, as usual, perfectly, and the Jaeger tri-gauge was showing the reassuring symmetry of 75 degrees of water temperature, 60psi of oil pressure and half a tank of fuel.

Our plan to keep ahead of the pack so as to shirk any real navigational responsibility was going very well. I should point out that we weren’t leaving everyone else stranded in the wilds of rural Hampshire (Oh The Horror! They could end up somewhere more than 500 yards from a bijou delicatessen and an iMac repair shop!). The SMC provides excellent and very accurate pace notes. The only flaw was that the knob to reset the Standard’s trip meter had fallen off so working out the distances between turnings required on-the-fly basic arithmetic to add the stated distance to the existing one on the trip. This, shamefully, proved more difficult than it should have been! 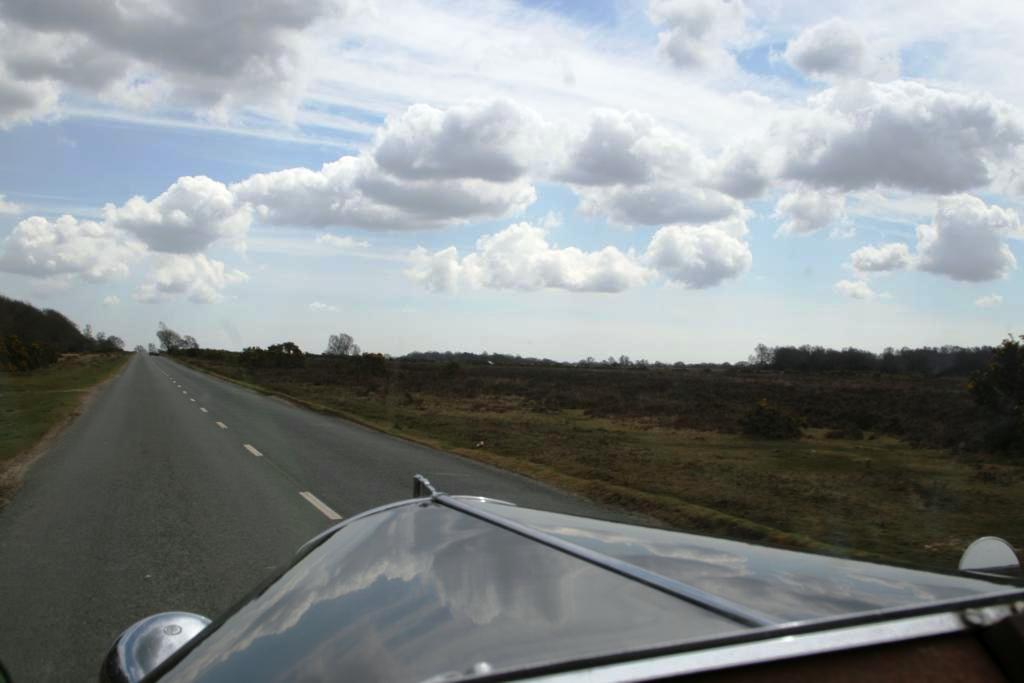 It also meant that instead of simply reading the total mileage off the trip I had to remember the mileage reading that it would show at the next point. This is far more than I’m capable off while heel-and-toe-double-de-clutching my way down the Twelve’s gearbox. At least that is my excuse for why, when loping along a very pleasant New Forest highway, I saw a turning off the left signposted to a village that I was sure featured in the next set of directions. Cable-operated Girling drum brakes don’t do sudden stops (they require notice, in writing, of any forthcoming braking maneuvers) and it was with a screech of tyres worthy of a ‘Seventies American cop show that I heaved the Standard into the side road, only to instantly realise that I had gone wrong.

By the time we had turned around and dodged a few more (bemused) ponies we were now in the midst of the SMC pack, which was causing minor chaos as it had mingled with another car road run and a gaggle of classic motorbikes. In a haze of unburnt hydrocarbons this moving encyclopaedia of the British motor industry rolled onwards. 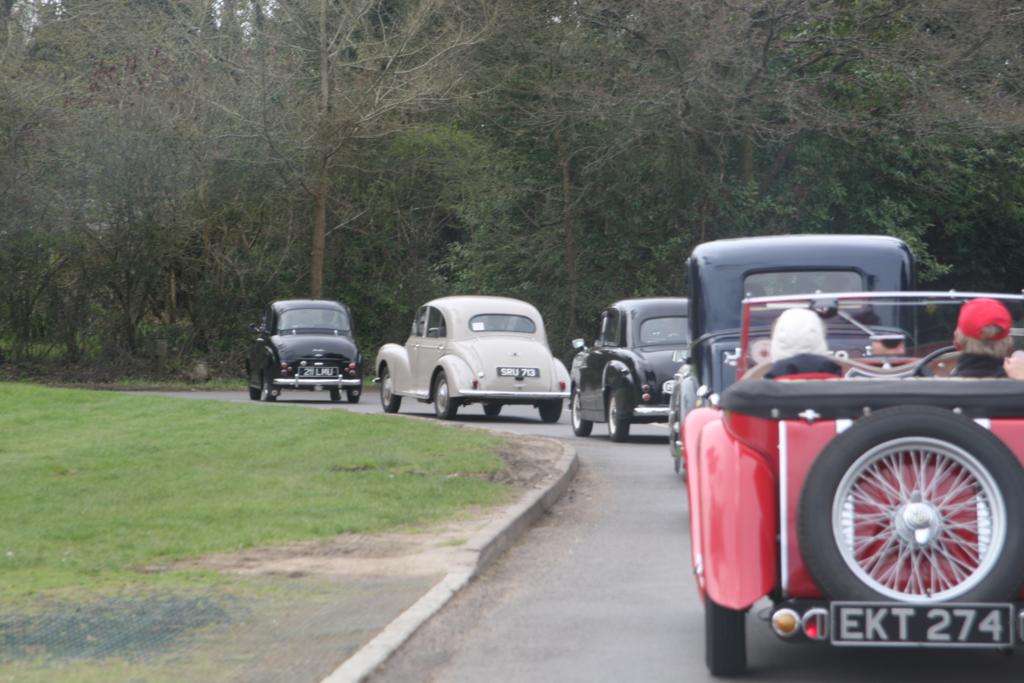 Now we only had to follow the car in front things went much more smoothly- apart from a few times when said car decided to peel off for home and suddenly dived down a turn-off. Having been specifically set off first we arrived back at the starting off point right near the back of the convoy. Not that it’s a race, of course!

Navigational cock-up aside it was, as always, a cracking event. I don’t quite know why driving your classic in a long line of other classics is so much better than driving it normally, but it is. If you haven’t done a non-competitive road run, I strongly recommend that you do so. 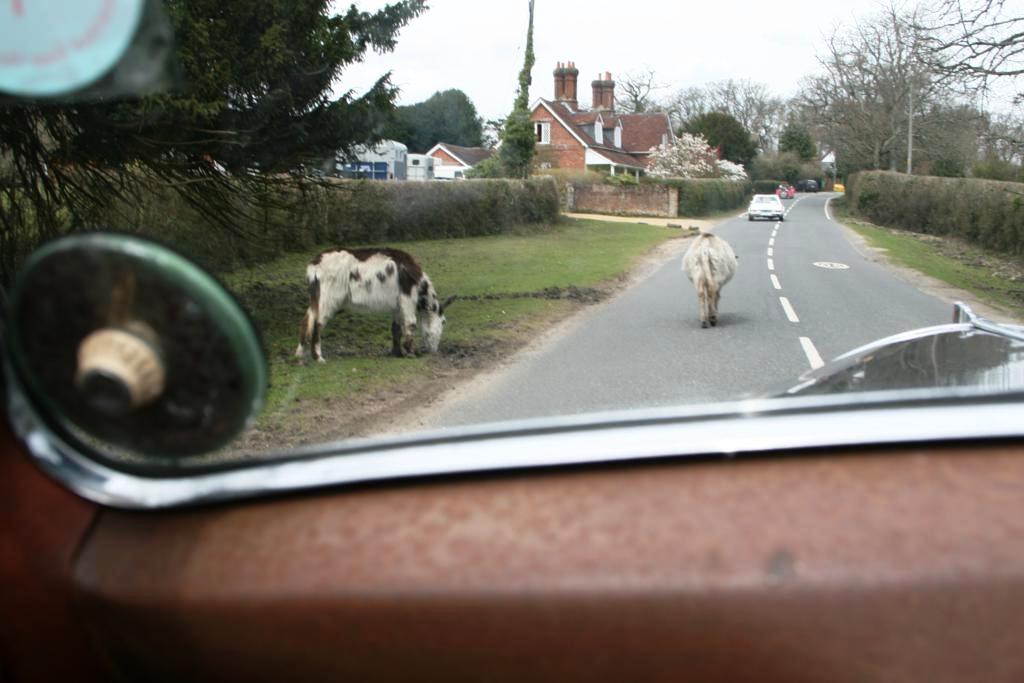 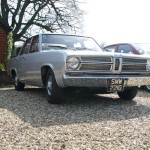 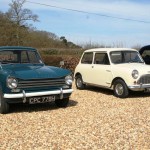 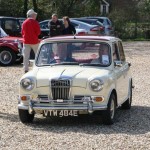 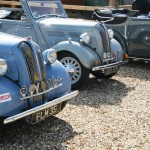 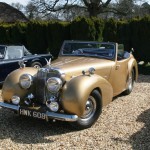 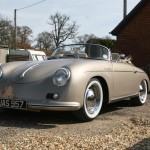 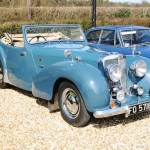 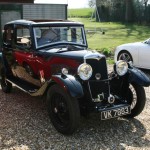 A pre-war Riley with a decent ‘prow’ front end. 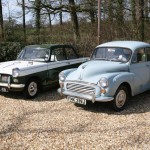 Triumph Herald and a Morris Minor 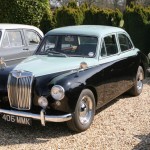 Seen this MG Magnette before, somewhere… 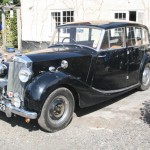 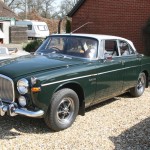 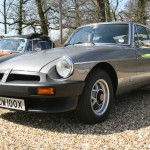 Apparently this is the 18th-from-last MGB GT 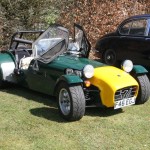 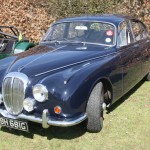 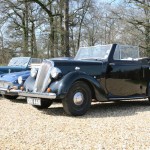 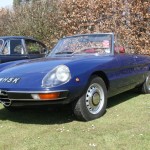 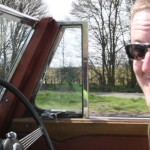 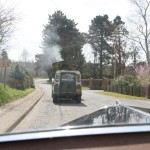 It looks like this Land Rover is suffering severe engine problems… 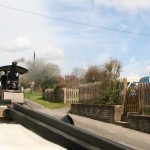 …but it’s actually one of the few road vehicles that a Standard Twelve can overtake. Awesome. 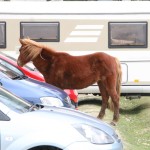 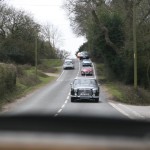